Tobacco Tax Reform: At the Crossroads of Health and Development 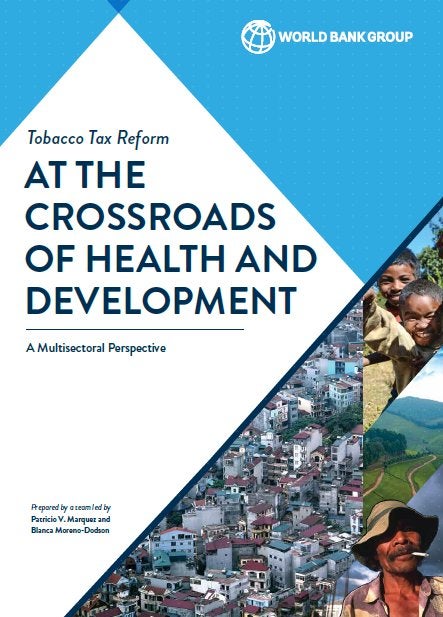 Few people today doubt that smoking is bad. But many, including seasoned policy makers, do not realize just how bad it is. Bad for people, bad for economies, and bad for poverty reduction. In fact, tobacco use not only kills millions of people each year but places a staggering poverty and economic burden on low-income families and less-developed countries that is deepening inequalities between and within countries.

In a new report, Tobacco Tax Reform: At the Crossroads of Health and Development, prepared in collaboration with a multisectoral team from different institutions, we show that by implementing tobacco tax policy reforms now, policy makers can choose a fast road to healthier, more prosperous societies.  Indeed, country evidence indicates that higher tobacco tax rates could save millions of lives each decade, reduce poverty, and boost public resources for development investment. Yet, today, tobacco taxation remains one of the world’s least-used tobacco control measures.

We argue in the report that the power to change this situation however exists. Not in the hands of any single leader or institution, but in a global coalition uniting governments, multilateral agencies, civil society, researchers, the private sector, and communities: a coalition dedicated to ensuring that the life-saving impact of tobacco tax reform reaches the largest possible number of people in the shortest possible time.

If leaders want to move forward on tobacco excise taxation, what are the critical steps?  What are the common pitfalls they should avoid? This report distills a large body of evidence on successful practice in tobacco taxation and the decision-making process.

• Go big, go fast. Tax strategies should focus on health gains first, then on fiscal benefits. This means going for big tobacco excise tax rate increases starting early in the process. Adopting a slow, cautious timeline might sound prudent. But it means condemning large numbers of people to avoidable illness and premature death.  In tobacco taxation, the rewards go to those who act boldly.

• Change expectations. Communication with the public is also critical. Governments must make sure consumers know that a tax-rate hike is not just a one-off, but that cigarette prices will keep going up. This is a motivator for current smokers to quit and young people not to start.

• Tax by quantity. Tobacco tax rates should be simplified and based on the quantity of cigarettes, not their price. This is done in two ways, both of which preempt smokers’ switching to cheaper cigarette brands after a tax-rate hike on the brands they previously smoked (a response called “downward substitution”). The first key move is to use specific excises, as opposed to ad valorem (value-based) excises or other taxes. A key factor that needs to be considered is that specific rates require to be adjusted over time to at least keep pace with inflation and, preferably, at a faster rate so that affordability is reduced over time. Any strategy for adopting them should be therefore accompanied by a framework/instrument to allow for annual increases over time (such as the United Kingdom’s tobacco duty escalator). The second is to merge the multiple tobacco tax “tiers” used by most developing countries. This way, tax hikes raise prices by the same large amount on all brands at once, pushing smokers to quit completely, rather than switch.

• “Soft earmarks” can win support. Earmarking tax revenues through legislation is criticized by fiscal experts as contributing to rigidities, fragmentation, and eventual distortions in public expenditures. However, “soft” earmarking of funds — for example, linking increased taxes to increased health spending — has helped generate grassroots support for the tax hikes. This has been shown by experience in other sectors, and it has worked for tobacco taxes in countries like Australia, Philippines, and the United States.

• Build broad alliances. Country leaders face sharp resistance to tax rate increases and other tobacco control measures from the tobacco industry. The industry is both financially powerful and politically astute. Tobacco industry advice to governments promotes the most ineffective interventions and seeks to undercut and weaken tax measures. To counter these pressures requires robust scientific and economic analysis, as well as multi-sectoral policy development. It also demands the mobilization of civil society and opinion leaders. Support from international partners is also required, particularly in low-income countries, to strengthen country capacity for lining up and coordinating all parts of government, while engaging a wide set of stakeholders outside of government.

The good news is that countries and partners can come together, not just around a problem, but around a proven solution. A stronger, united effort is required to advance the global tobacco taxation agenda toward better health, less poverty, and greater development opportunity for all. Manager of the Center for Mediterranean Integration (CMI)

Great 'how to' article. The different interventions create multiple levels of inter-connectedness that help create the momentum to move forward. The section on building broad alliances resonates as a critical factor that is often not implemented with the same rigor as other interventions.