Without Health for All, We Will Not End Poverty by 2030 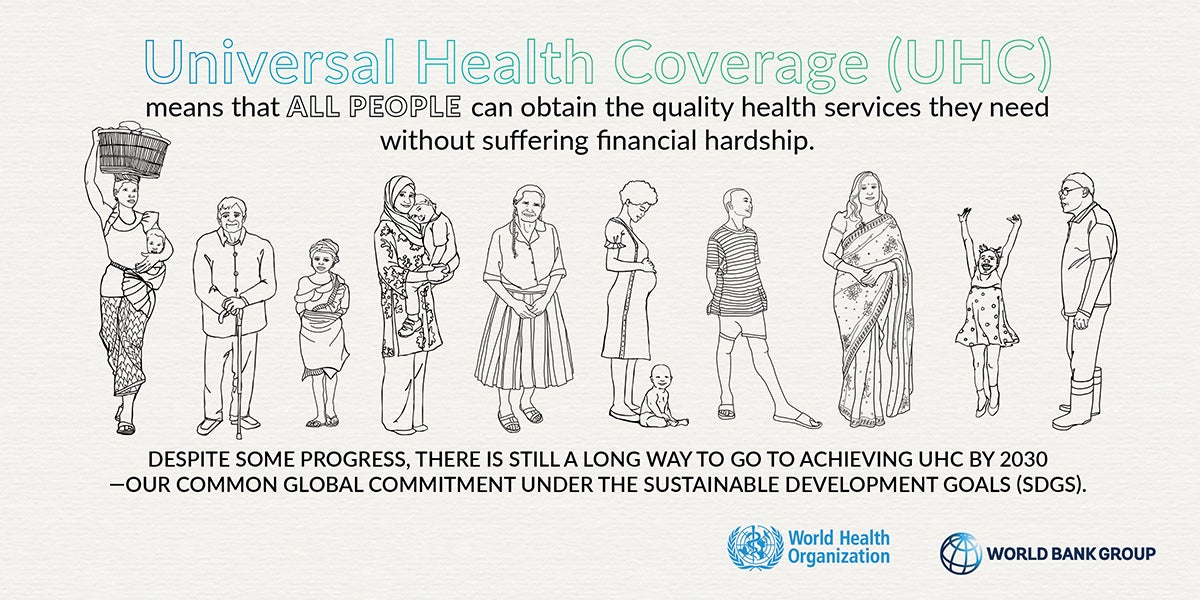 All people are entitled to quality essential health services, without suffering financial hardship to pay for health expenses when they are sick. This simple but powerful belief undergirds the growing movement towards universal health coverage (UHC), now a global commitment under the Sustainable Development Goals (SDGs).

But if we’re serious about this commitment to UHC by 2030, a new report entitled Tracking Universal Health Coverage: 2017 Global Monitoring Report, launched today by the World Bank and World Health Organization (WHO), is a sobering wake-up call.

Despite some progress, it finds that about half the world’s population lacks access to essential health services. Of them, over a billion live with untreated hypertension, and 200 million women do not have adequate access to family planning and maternal health services. And there are major inequities in health care access—for example, only 17 percent of mothers in the poorest fifth of households in lower and lower middle income countries have access to at least six of seven basic health services, while about three-quarters of those in the richest fifth of households do.

The report also makes clear the alarming financial calamity that health expenses represent for tight household budgets. Health expenditures are pushing about 100 million people per year into “extreme poverty,” those who live on $1.90 or less a day; and about 180 million per year into poverty using a $3.10 per day threshold. But impoverishing health expenditures are the tip of the iceberg. Moreover, more than 800 million people spend at least 10 percent of their household budgets on health expenses, a figure that has been increasing by 3 percent per year since 2000.

The risk of these big numbers is that they hide the individual and family tragedies and injustices upon which they are built: the infant that isn’t immunized and dies from pneumonia; the stunted child whose school performance is permanently impaired; the pregnant teenager unable to secure family planning services; the mother who is hemorrhaging post-partum without access to blood transfusion products; and the farmer who sells the oxen to pay for hospitalization of his terminally ill mother.

This report makes clear that UHC is not just about better health. Ending extreme poverty is the overarching goal of the SDGs, and the target driving the World Bank Group’s strategy, and the stark reality is simply that this goal will not be attained without UHC.  Here’s a clear pointer: though the overall number of people living in extreme poverty has fallen since 2000, the proportion of the extremely poor who have been impoverished because of health expenses has nearly doubled from 8 to 15 percent.

Moreover, our Business Unusual: Accelerating Progress Towards Universal Health Coverage report identifies countries in the top 75 percent of performers that accelerated access by bending the curve. Countries such as Rwanda, Turkey, Kazakhstan, Vietnam, Burkina Faso and Lao PDR made unprecedented gains in closing the gap in access to services.  In addition, countries at all income levels are at the vanguard of adopting UHC through extraordinary national leadership and ambitious reforms. They’re recognizing that it is both the right and smart thing to do for their citizens.

UHC is more than just a moral imperative. It is a powerful social equalizer which contributes to social cohesion and stability. It meets the increasing aspiration for good health of people all over the world. UHC is also a key foundational investment in any country’s human capital, which is the largest driver of sustainable and inclusive economic growth. Without quality, affordable health care, children’s opportunities to attend and excel at schools and parent’s ability to work and progress in their careers is unnecessarily compromised.

While UHC defies a one-size-fits-all global prescription, there are common challenges that transcend contexts and benefit from concerted efforts to breakthrough barriers and share best practices.   To take stock of where we are, to drive increased political commitment and accelerate progress towards UHC by 2030, the Universal Health Coverage Forum 2017 is taking place this week from Dec. 12 to 15, in Tokyo.  It features high level speakers from Japan’s PM Shinzo Abe and UN Secretary-General Antonio Guterres to WBG President Jim Yong Kim, WHO Director-General Tedros Adhanom Ghebreyesus and UNICEF’s Executive Director Anthony Lake, joined by heads of state and ministers from over 30 countries, bilateral donors, and philanthropies. Two days of the Forum and a high level public event are being led and convened by global civil society organizations, reflecting the strong citizen voice driving the UHC movement. The Forum is the culmination of country level events all over the world on Dec. 12, which has been officially named by the UN this year as Universal Health Coverage Day.

We are at a critical turning point on UHC. There is global political commitment like never before, and impressive country-level leadership. The path to UHC cannot be through “business as usual.” We have to embrace innovation at a scale that will transform health systems—and an innovation showcase at the Forum points to a well spring of ingenuity emerging from dedicated practitioners and passionate changemakers.  At the World Bank, we look forward to working with and learning from our committed and dynamic partners all over the world in supporting every country to make UHC by 2030 a reality.