All those external validity issues with impacts? They apply to costs too!

Of course, if you’re a policymaker trying to decide whether or not to implement a program that was effective (in some other place and time), you don’t only care about the impact. You also care about the price tag. To fill this gap, some researchers record costs to calculate the cost-effectiveness of an intervention: How much impact can you get for $100?

It’s not easy to say. As McEwan (2014) documents in his analysis of 77 education studies, “56% of treatments reported no details on incremental costs, while most of the rest reported minimal details.” We reviewed a few of these studies and found not-so-detailed cost documentation like “We estimate that the cost of implementing the grant was about US$321 (excluding the grant itself) per school,” That number may be useful, but without knowing what’s inside it, it’s pretty tough to build a comparison to other projects.

To begin to fill this gap, J-PAL has followed up with authors on a whole range of education studies to put together consistent cost-effectiveness estimates (for example, on teacher attendance, student attendance, and student performance). In a new paper, we used J-PAL’s data to dig a little deeper on the question of costs. Here’s what we found:

This isn’t hard to imagine. Just using J-PAL’s data, which at least makes an effort to be comparable, we compare some common cost ingredients across evaluations and see dramatic variation (per Figure 1 below). So if I were in Nepal, thinking about applying a successful intervention that increased student-teacher ratios in Liberia, the fact that primary teacher salaries are 80% higher in Nepal would really matter.

Figure 1: Cost of core components of education interventions across settings (in 2011 USD) 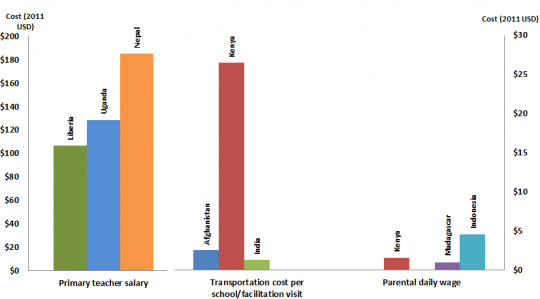 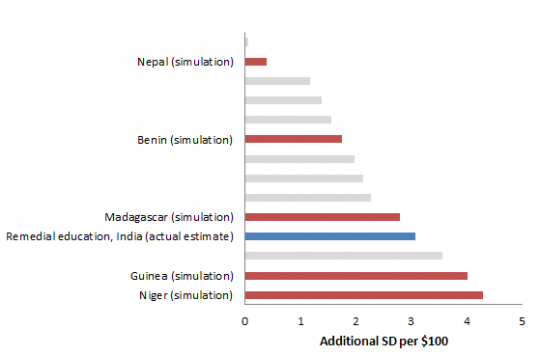 2. Costs vary a lot with program scale. Most of our evidence is on small-scale programs.

We all have the intuition that pilot programs are more expensive (and probably more effective) than programs at scale. These data allow us test this hypothesis on the cost side. For each intervention, we graph the cost per student against the total number of beneficiaries. You can see the result in Figure 3 below. It’s a small sample, but it certainly looks like costs drop as the number of students rise. But we also see major clumping towards the bottom: We have a lot more rigorous evidence on small programs than on big ones. The World Bank, J-PAL, and others are all seeking to evaluate more programs at scale, and it seems like every other week Professor Muralidharan is doing some new project with 80,000 students or 1,000 villages. But in the meantime, extrapolating costs from a rigorously evaluated pilot program to an at-scale program in another country will prove challenging. 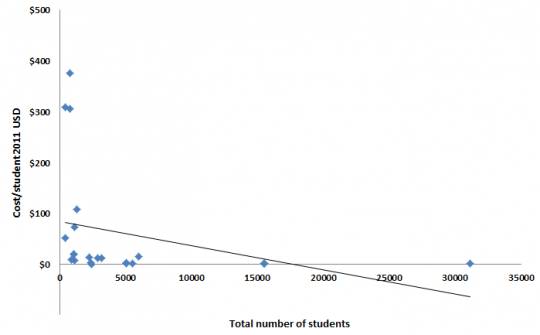 We don’t have direct evidence for this in the context of costs (external validity, man!), but there is lots of evidence in consumption that people forget over time; here’s an application in Ghana, and one in India. It’s likely that cost estimates for programs – almost always reported well after the fact – suffer some of the same problem. It’s true that programs have budgets, but these budgets often group together items from multiple programs, and typically fail to capture most opportunity costs. It’s time to do with cost measurement what impact evaluations have begun to do with impact measurement: Start at the same time as the project starts.

4. Some programs will have more easily adaptable costs than others.

Across a sample of 14 education programs, the median number of total separate cost ingredients (e.g., teacher salaries, materials, transportation) was seven. For programs with a bunch of different ingredients, figuring out how much it will cost in another context is a lot of (guess)work. Figure 4 shows the number of cost ingredients against the total cost explained by the largest cost ingredients. For programs like computer-assisted learning, few ingredients explain most of the program, which may make it easier to get a sense of how to transfer it from India to Lesotho. 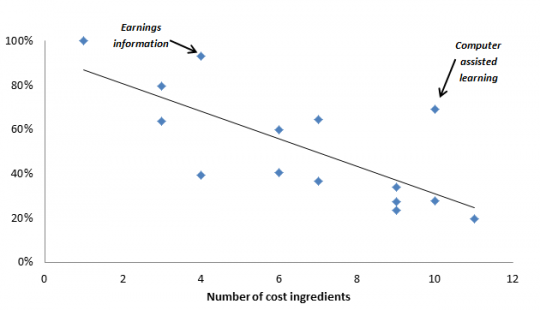 If we want to be relevant to the policymaking process, we can’t ignore costs. But we also can’t continue reporting them badly. Detailed data, gathered as researchers go along, are crucial for making the leap to highly policy-relevant impact evaluations. Then policymakers and their advisors have the task of adapting those costs (and the impacts) at home.

For the avid reader: Dani Rodrik has a good book that expounds on this in his inimitable fashion: "One Economics
http://www.amazon.com/One-Economics-Many-Recipes-Globalization/dp/06911…

The World Bank and DFID will surely have a ton of data on unit costs from all their various project reviews, why not take a look at that?

This is a great suggestion and exactly what researchers should be doing along with an impact evaluations.

Your article prompted some questions. How can it be possible that the grantor give funding to a project without reviewing a business plan and financial projection. Should not a project manager report all these financial matters to the stakeholders? Most projects have some academic value and this info available, why the difficulty to get reporting for future research?

There is lots of variation in the level of detail and the format in which costs are reported on projects, which can make it very challenging for researchers to bring them into a consistent, comparable pattern. That said, it is a challenge we have to meet if we want to enhance our policy relevance.