Challenges in counting the world’s hungry

This post is co-authored with Joachim De Weerdt, Kathleen Beegle, and John Gibson

Global numbers on hunger prevalence are widely followed, not least because halving the proportion of hungry people from 1990 to 2015 is one of the prominent Millennium Development Goals (and achievements under this goal seem to be quite slight till date). The standard approach to these numbers – one that combines mean per capita food consumption derived from national Food Balance Sheets (FBS) with a survey based measure of the distribution of caloric intake – faces several measurement challenges; an alternative that relies on household consumption surveys for direct estimates of hunger has been increasingly promoted. Unfortunately our findings from a recent working paper raise questions about the cross-country validity of both approaches as currently practiced.

In both the standard approach (the FBS method) and the consumption survey approach that solely relies on Household Consumption and Expenditure Surveys (HCES), the use of household survey data is fundamental. The FBS method utilizes the caloric variance estimated across households by survey while the HCES method measures hunger directly as a function of the observed total household food consumption in relation to estimated household caloric need. One challenge to these approaches, however, is that the design of household consumption surveys varies widely around the world with respect to numerous dimensions. These dimensions include:

(a) the method of data capture – which is typically either diary or a recall questionnaire
(b) the reference period over which consumption is measured – which can vary from one day to one week to one month
(c) the degree of commodity detail – which can range from a handful of aggregate commodities to over 400 relatively detailed commodities.

Our study explores the net effect of reporting error arising from 7 different very common designs of consumption survey, including one that we see as a survey “gold standard” – an intensively supervised personal diary with detailed cross-checks across household members. Our study is a randomized within-village experiment with good covariate balance that extends over an entire calendar year, so the results should not be subject to seasonal or community level confounders. The only difference in population hunger numbers should be due to the particular survey design administered. And golly what a difference it is.

The estimated daily per capita (kilo)calorie intake ranges from 1793 to 2677 depending on the survey module. As a consequence hunger prevalence ranges from 18.8 to 68.4 percent (see Table 1). This wide range in prevalence translates to a difference of more than 23 million people in Tanzania, a country with a population of 45 million according to the 2012 census.

So far we’ve focused on the HCES method but the global hunger estimates derived from the FBS method are also subject to the vagaries of cross-country survey design. Remember that, in this method, the variance of calorie consumption is measured through HCES even though the mean is taken from the National FBS. Now there are numerous grounds to question the accuracy of the balance sheets including the degree to which they capture national post-harvest stores and losses as well as the accuracy of their root crop yields – but that is beyond the scope of this post (and the related paper). However it is clear that survey design variation will also affect the FBS derived estimates. In Figure 1 we apply the estimated variances from the seven different modules to the mean caloric intake of our “gold standard”. The resultant hunger prevalence estimates range from 17 to 28 percent on the basis of survey design driven differences in the estimated second moment of the calorie distribution. 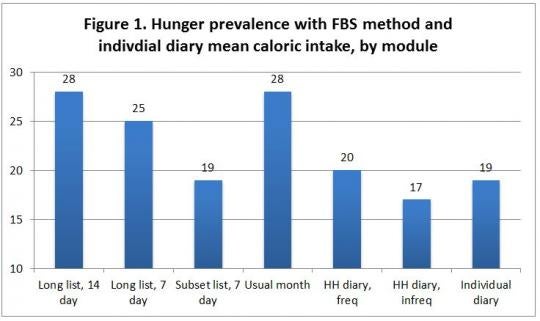 We believe the survey approach to hunger measurement holds promise, especially since the availability of HCES surveys around the world are increasing every year and collect a lot of important covariate information. However much more work remains to improve accuracy, most notably: (a) harmonizing survey design around the globe and (b) devising creative ways to validate self-reported consumption against a known benchmark.
Countries
Tanzania

Measuring hunger is a challenge indeed, thanks for the interesting blog post.
Whether per capita consumption is derived from food balance sheets or household surveys, both approaches are only proxy measures for hunger, though. They try to measure one key determinant of hunger (food intake), but there are data problems, as you mention, and then intake is only one determinant among others.
Recently I argued that it might be more constructive to look at the actual consequences of hunger when trying to measure it - namely the loss of (physical and mental) functioning that results from undernutrition [1]. Such data is available from Global Burden of Disease studies -- which were pioneered in the Bank's 1993 World Development Report [2] and which have since then been carried out by the WHO [3] and more recently in a Gates-fundend project [4].
This is a bit of a departure from the focus on the "input" side of hunger, but it might be worth giving it a thought.
[1] Stein A.J. (2013). "Re-thinking the measurement of undernutrition in a broader health context: Should we look at possible causes or actual effects?" IFPRI Discussion Paper 1298. Washington: International Food Policy Research Institute. http://www.ifpri.org/publication/rethinking-measurement-undernutrition-…
[2] World Bank (1993). World Development Report 1993: Investing in Health. Washington: World Bank and Oxford University Press. http://wdronline.worldbank.org/worldbank/a/c.html/world_development_rep…
[3] WHO (2014). "Global Burden of Disease (GBD)." Website. Geneva: World Health Organization. http://www.who.int/healthinfo/global_burden_disease/gbd/en/index.html
[4] IHME (2014). "Global Burden of Diseases, Injuries, and Risk Factors Study 2010 (GBD 2010)." Website. Seattle: Institute for Health Metrics and Evaluation. http://www.healthmetricsandevaluation.org/gbd/research/project/global-b…

Hi Alexander, you raise some excellent points. Thanks for your contribution and the links to the wider literature. I think there is great scope for anthropometric or nutrition related measures to inform the wider hunger numbers. Although we will have to clarify certain differences in the underlying frames of reference - most hunger measures reflect the immediate past while malnutrition type measures largely capture a stock of health that is shaped over a much longer period - and hence need to clearly define the hunger construct we wish to measure. Thanks again!

Hi Jed, yes, of course we need to clarify what we refer to as "hunger". In my view it is only hunger if it affects people's functioning and therefore has a negative impact on their productivity and well-being, reducing their capacity and capability to study, work, take care of their dependents, etc. It exactly this loss of functioning that is measured by summary measures of population health, such as DALYs. (Or is there also "hunger" that has no negative mental or physical health consequences?)
Regarding measuring the immediate past vs. capturing a stock of health, at least for the calculation of the original DALYs incident rates are used and not prevalence rates, i.e. the entire health loss due to a chronic condition (such as stunting due to zinc deficiency or blindness due to vitamin A deficiency) is counted at the year of onset (with the loss being calculated over the average expected life expectancy of the individual). Short-term outcomes, such as malnutrition-related night-blindness, diarrhoea, or loss of stamina are anyway counted in the period of observation. Hence what matters for these measures are only single periods of observations, not longer periods.

Hi Alexander, thanks for these excellent, thoughtful comments!