This is the twentieth in this year's series of posts by PhD students on the job market.

In my job market paper, I study how local leaders and the national state interact. Specifically, I estimate the effect of state presence on the power, legitimacy, and effectiveness of village chiefs. In other words, do village chiefs become more or less influential when the national state is absent (or present) and how does this affect their public good provision? A key institutional feature in this context is that African states have used different strategies of dealing with traditional leaders that primarily vary on one dimension: whether chiefs are formally integrated into the state apparatus. I investigate how this institutional choice shapes the relationship between state presence and chiefs.


Studying the effects of state presence is challenging for two key reasons. i) It is difficult to find subnational data on the reach of national institutions that is comparable across countries and ii) state presence is typically correlated with other variables, making it hard to obtain causal identification. I use a spatial regression discontinuity design to overcome these challenges.

First, I measure the presence of the national state by looking at how far away a village is from its administrative headquarters, the state or district capitals. The relevance of this measure is intuitive in the context of the work performed by state institutions. Consider a police station, for example. Two main responsibilities of the police are patrolling and responding to emergencies. Both tasks will be easier to perform closer to the police station. Police will take a longer time responding to emergencies farther away and patrolling areas more distant from the police station is more difficult. This relationship between distance and the ability to implement policies is at work for most state agents, such as tax collectors, or officials tasked with overseeing infrastructure and service delivery. Indeed, I show in my paper that in 25 African countries, the distance to state and district capitals is strongly negatively correlated with a range of outcomes associated with state presence and capacity. Yet, the endogeneity concern remains. Distance to the state is correlated with other variables such as rurality or access to markets.

To obtain random variation in state presence, I compare villages at internal administrative borders. I look at villages within the same country, but within 5 kilometers to an administrative boundary, where one set of villages is far from their administrative headquarters and the other set is close. The intuition for this geographic regression discontinuity design can be seen in Figure 1, which shows state boundaries in Nigeria. The two villages (marked by triangles) should be fairly similar in terms of their characteristics, but they are in different states and have different distances to their respective state capitals (marked by squares). Whereas people, goods, and services can move across this internal administrative boundary with relative ease, the state — in the form of state administrators — is unlikely to cross it, thus creating a sharp discontinuity of state presence at the state border. 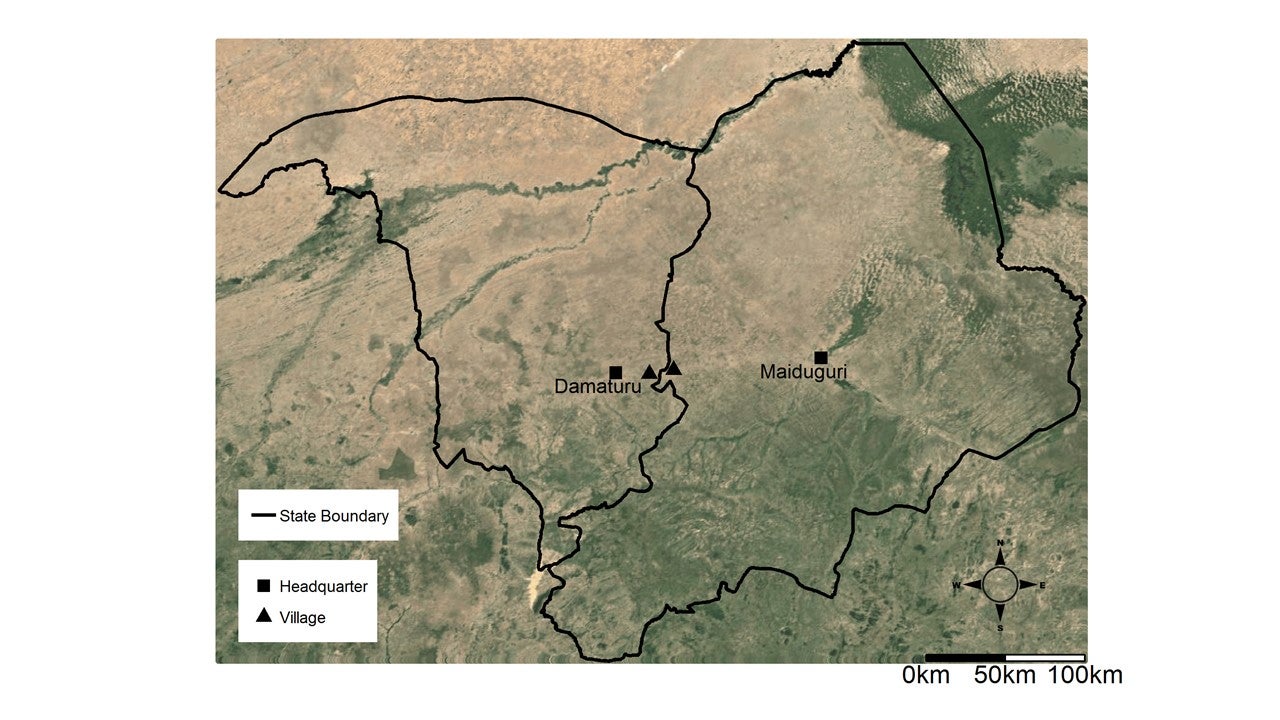 To implement this empirical strategy, I created an original data set of all administrative boundaries and headquarters in 25 African countries. I also track their changes over the last 20 years. The resulting data set contains over 5,500 administrative units in 47 administrative divisions and is available for other researchers on my website. I merge this data with geocoded responses to the Afrobarometer and Demographic and Health Surveys which contain measures on the local power of traditional leaders and public good provision, some of which traditional leaders often contribute to (e.g., schooling and access to water) and others where they have little input (e.g., healthcare). Restricting my sample to cases within 5km of an internal administrative boundary and with observations on both sides leads to a sample of 635 villages in 210 border regions for the Afrobarometer and 2,600 villages in 650 border regions in the DHS data (6-10 respondents per village) . 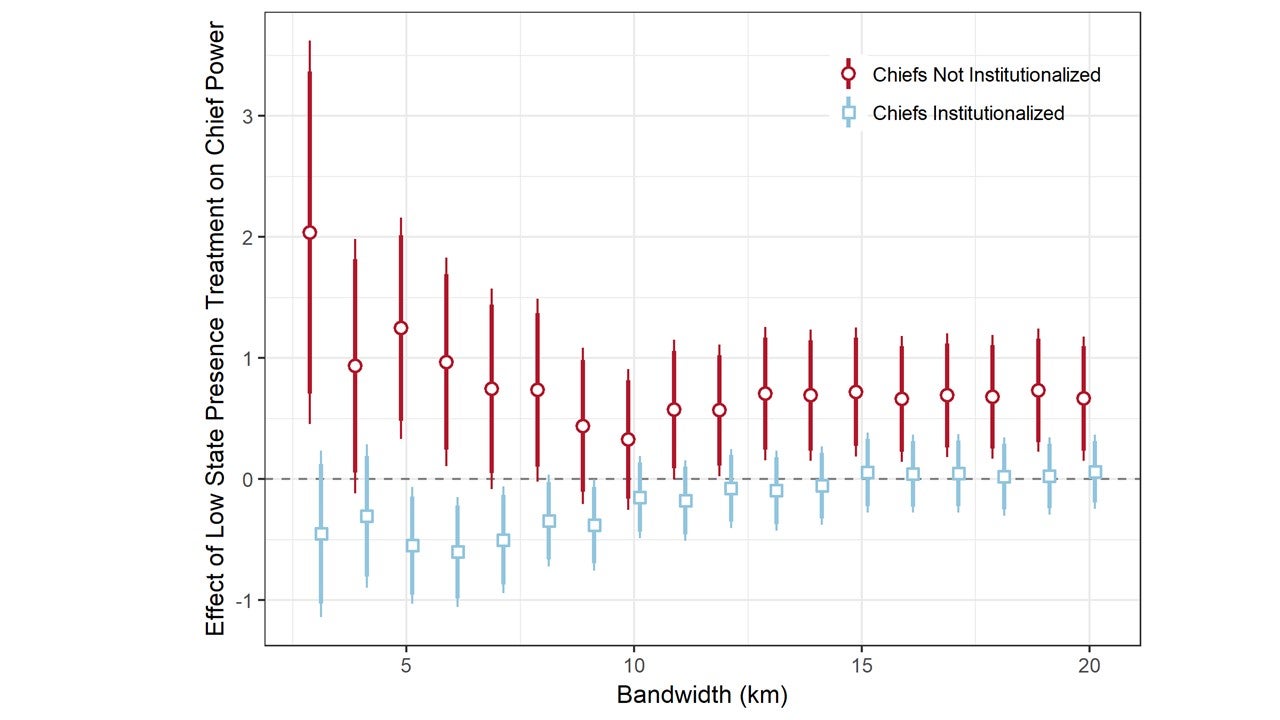 A key concern is whether there is a confounder that drives both whether traditional leaders are integrated via a country’s constitution and whether chiefs are complements or substitutes to state presence. I collect a range of historical, geographical and contemporary country level variables – such as colonial investments or the centralization of historical institutions  – to test this concern. All of these possible determinants of the institutionalization of traditional leaders neither confound these heterogeneous findings nor independently explain the local state-chief relationship.

The results have implications for the relationship between traditional leaders and state presence at the local and national level. At the local level, policy makers increasingly look to traditional leaders to support local efforts such ending child marriage or combating norms about Ebola. My findings can help policy makers understand which village chiefs are more influential and how cooperation with them (by the state or NGOs) will impact their local power and effectiveness. At the country level, the results shed light on why traditional leaders remain influential in some successful states (e.g., South Africa) in contrast to predictions by modernization theory while they have lost local standing in others (e.g., Rwanda). My work further adds to our understanding of the incentives motivating politicians and traditional leaders when they bargain over institutional arrangements between the state and traditional authority.

Soeren J. Henn is a PhD Candidate in Political Economy & Government at Harvard University. More details about his research can be found on his personal webpage.

I am a retired professor of Sociology at the Free University of Berlin. My field of interest is Africa with special emphasis on sub-Saharan Africa. I have spent 5,5 years in Africa, doing research and travels in 14 states. Your field of interest is closed to mine.
A former Ph.D. candidate Raoul Bagopha is working for Misereor, the catholic organization. He comes from the grasslands of Camaroon: In his leaves he serves as a highranking influential of a traditional chief, here one of the kings of the some 50 kingdoms in Camaroon grasslands.
I would like to follow your research.
Prof. Dr. Manfred Schulz
Schwendenerstraße 29
14195 Berlin/Germany
e-mail: [email protected]