Conditional on your parents, does your country matter for early childhood human capital? Surprisingly no!

There is a large literature that emphasizes the importance of investments made in early life for lifetime outcomes. Does growing up in a poor, conflict-afflicted country have a negative impact? There are many reasons to think yes, including the disease environment, quality of medical facilities, availability of nutrition, quality of early-childhood education facilities etc. So I was surprised by a paper by Todd Schoellman in the most recent AEJ Macro which argues that parents, not country, are what matters for early childhood development.

His argument for why country can’t matter
He studies the adult outcomes of refugees who immigrated to the U.S. as children, but who differed in the age of arrival. The main analysis is on IndoChinese refugees fleeing the Vietnam War and Khmer Rouge. The thought experiment is to compare the labor market outcomes and completed education of a refugee who arrived at age 1 to one who arrived at age 3 or 4. The latter had 2 or 3 more years of that critical early childhood period in a poor country (Vietnam, Laos and Cambodia) where conflict was going on, and then both come to the U.S. and grow up there.  The key result is seen in this graph – which shows that adult wages are no different for those who arrived at age 4 or 5 versus those who arrive at age 0 or 1: 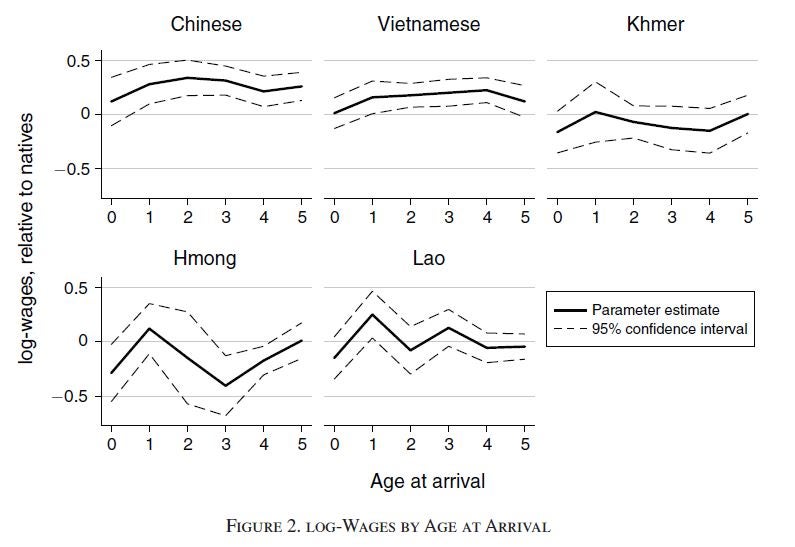 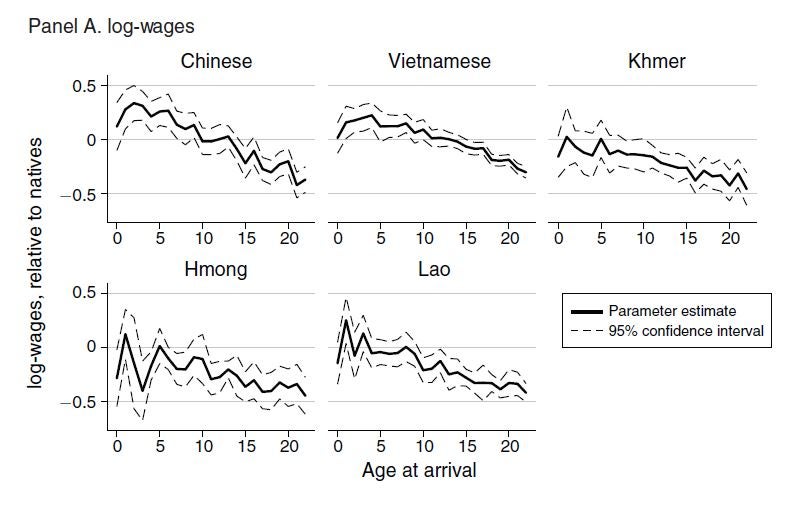 What’s going on?
Two explanations spring to mind: As a consequence, he argues that the theory most consistent with this data is that parents, rather than country environment, are the most important inputs to early childhood human capital formation. Of course one can argue that country environment in turn shapes parents – it determines parental education, parental wealth, etc. But the result that parents, and not goods or place, matter is a surprising one. By the way, if you are worried about external validity, he shows the same flatness of log wages with respect to age of arrival between 0 and 5 also holds for Ethiopian and Afghani refugees, Cuban immigrants, Mexican immigrants, and for the set of immigrants from poor countries as a whole.
If you want to argue about another type of external validity, I would argue that the U.S. may not be very good at providing early childhood care for refugees (at least at the time of the study) – this is not discussed in the paper, but it seems likely to me that the U.S. is a worse place to receive early childhood care if you are a poor family than most European countries or Australia and New Zealand – so perhaps it is only when you get into public schools here that you start to get the benefits. The type of data the authors have doesn’t tell us anything about what early childhood educational facilities, if any, were available to these refugee kids.
Topics
Education

Very interesting post, thanks David. I guess one thing that may be going on here is that all the parents in the sample were ones who made a decision to emigrate when their children were young, presumably partly with the future of their kids in mind? If so, then the parenting effect may be unusually strong for this group of parents ie. perhaps they are particularly able or willing to take action in various ways to protect their kids from country specific factors such as poverty or conflict that might hold them back?

I think you are correct. The US offers not just immigrants but all young children very little in the first 3 years and not much from 3-5 that would have a noticeable impact except in a few places. It would be interesting to see a comparison using one of the Nordic countries.

Hi David,
Thanks for linking to this very interesting paper. The finding is indeed striking that, for eventual labour market outcomes, it doesn't matter whether you came in at the age of 1 year or 4.
The implications for human capital divergence across countries depend a lot on whether we think this mostly happens before or after this critical period preceding school entry. I have looked at this directly using the Young Lives data in Peru and Vietnam. Children in these countries have near-identical distribution of test scores at 5; these diverge massively by 8 with Vietnamese students scoring about 0.75 SD higher (normalized wrt the Vietnamese distribution); and nearly all of this gap is causally attributable to the much greater productivity of a grade of schooling in Vietnam than in Peru (established through individual panel-based value-added models and regression-discontinuity designs). In PISA 2012, Vietnam and Peru are respectively the top and bottom scoring developing countries. The latest version of this paper is available here: https://goo.gl/d993eN
This may still be consistent with the theory that what matters is parents, if the channel is through parents modifying behaviour differentially once the child is in school in Vietnam vs. Peru. But where this really does diverge from Todd Schoellman's conclusions is regarding the timing: ALL of this divergence is being created after school entry and seems to relate to schooling exposure and quality.
In a previous working paper of this paper, I had looked additionally at Ethiopia and India (two other countries covered in the Young Lives data). Here, there was a large test score gap with Vietnam at the age of 5 but even so, much of the divergence after happened in school years - equalizing the productivity of a school year closes 70% of the gap between India and Vietnam at the age of 8 even leaving the gaps between countries at 5 unchanged. (Results in an older WP here: http://www.csae.ox.ac.uk/workingpapers/pdfs/csae-wps-2014-28.pdf)
So, in short, (1) it is plausible that what we usually attribute to environment and resources is often just a reflection of parental inputs but (2) it is not sufficient to conclude that this explains international human capital divergence (or not) by just looking at preschool ages.
Thanks,
Abhijeet Singh
UCL

First, thanks David for writing this up and offering his reactions.
I too am curious whether the finding would generalize to countries with stronger government intervention in early childhood. (I'd love to hear of any samples that had sufficiently many child refugees/immigrants to investigate this.) Regardless, I find it interesting that the many other possible advantages of income and country seem to matter so little.
I should also clarify in response to Abhijeet's comment that the paper's main findings and conclusions are only about early childhood human capital (hopefully this is clear in the paper). It has very little to say about the mechanisms for human capital formation or the possible divergence between countries after school starts, although I have investigated those topics elsewhere.