Does It Matter Who Answers the Survey to Identify Families in Poverty? Guest post by Adan Silverio-Murillo

Imagine that you receive a grant from the Bill & Melinda Gates Foundation to give money transfers to families living in poverty. Yet, the selected country does not have formal income records. As a consequence, you decide to collect income information through a household survey. On your way to collect the information, you find an economist who points out two problems: (1) income can be measured with a lot of noise; and (2) individuals may have incentives to sub-report income to participate in the program.

The economist suggests that instead of asking for income, an alternative is to ask for assets. The idea is simple. You can use information on assets to generate an index that allows differentiating between poor and non-poor households. For example, a family who has a car, refrigerator, and washing machine may be less poor than a family who does not own these items. More importantly, the use of assets has the advantage of reducing sub-reporting and measurement errors. Or at least, this seems to be the consensus among those who use information on assets to identify families in poverty.

How reliable is the information related to assets? My job market paper sheds light on this question. I use a survey applied to couples participating in Mexico’s PROGRESA program (currently PROSPERA). The survey is composed of four modules with the following order: (1) cognitive test; (2) psychological tests; (3) socioeconomic aspects; and (4) questions about childhood. The survey asks questions to the wife and to the husband, separately, about possession of 18 assets within the household. The 18 assets are presented in Table 1. Columns 1 and 2 represent the percentage of households that report ownership of the assets. The first represents responses from the husbands and the second from wives. The results are quite encouraging. There are no significant discrepancies between what couples reported. For example, 63.2% of husbands and 65.5% of wives reported possession of a refrigerator inside the home. 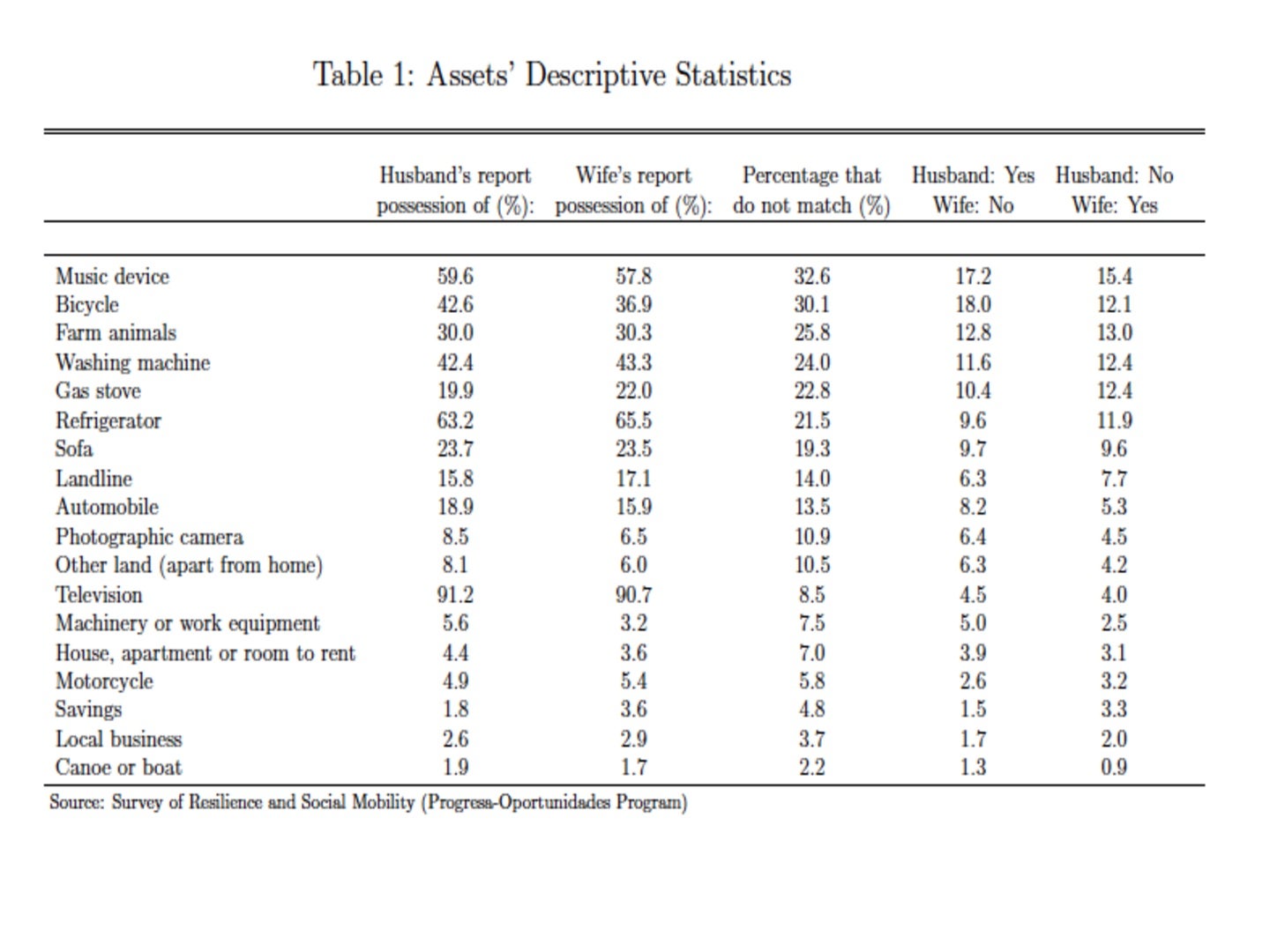 Is there a pattern that explains the disagreement in the information on assets reported by the spouses? There are many hypotheses about causes of misreporting in household surveys. Problems of misreporting can be related to cognitive process, social desirability, survey design, intra-household strategic behavior, and incentives (Bound et al. 2001). In this paper, I pay particular attention to the cognitive process. Responding to a survey requires a cognitive effort. To analyze this hypothesis, I use the number of unanswered questions to the first module of the survey (cognitive test module). The idea is that the number of questions not answered may predict the individual's accuracy throughout the rest of the survey. The results show that the number of non-responses in the cognitive test by men (not women) predicts disagreement in the information reported on assets. Yet, it is possible that this result is a consequence of omitted variables. Following the procedures proposed by Altonji, Elder, and Taber (2005) and Oster (2017), the observed relation is unlikely to be driven by unobservables.

What can we learn from these results? First, the information on assets is not free of problems of misreporting. Second, non-responses have valuable information. I found that unanswered questions to a cognitive test predict disagreement in the information reported later on assets. Finally, different people in the same household can provide significantly and meaningfully different answers. As pointed out by Philipson and Malani (1999), economists pay much more attention to the consumption of data than to the production of data. Rather than accepting information from household surveys as truth, practitioners should think in mechanisms to incentivize individuals to reveal accurate information or other ways to triangulate information.


Adan Silverio-Murillo is the Diversity Academic Post-doctoral Fellow in the School of Public Affairs at American University. He holds a PhD in Applied Economics at the University of Minnesota. You can read about his research here.

Hi, thanks for this interesting and important work. I oversee the PPI at IPA, and would like to point out that the tool referenced as Progress out of Poverty Index was renamed to Poverty Probability Index in 2017. povertyindex.org. Thanks!

Hi Julie,
Thank you for the information. I will make that change on my paper.
Best,
Adan

Adan, thanks for sharing your paper. I don't have an economics background, so apologies if this should be obvious from your paper. Your paper presents the implication that husbands and wives will not report asset data in the same way. Was any of your analysis able to suggest whether men or women presented a more accurate picture? I know one of the strong recommendations of the use of the PPI is that you conduct this interview at the household so that you can also verify at least the asset-ownership questions (so seems future research should also consider how to match up husband vs. wives reporting with who provided more truthful information--by validating actual ownership). Would love to hear more on this if any of your data can shed light on it?

Hi Bobbi,
Thank you for your comment and questions. I am not able to suggest whether wives or husbands presented more accurate information for the following reasons: 1. some goods (such as cars, trucks, and phones) were difficult to verify by the enumerators during a pilot; and 2. many interviewers were not able to enter into the houses and verify the information during a pilot. This maybe was a result of the growing insecurity in Mexico.
Best,
Adan