Exporting on eBay: The Impact of Lowering the Hassle Costs of Exporting

Getting more firms to export is a policy goal in many countries around the world. However, the trade literature has not had very many well-identified evaluations of policy interventions that facilitate exports (a notable exception being work by Atkin et al in Egypt). So I thought it would be useful to share the results of a recent experiment by Xiang Hui making it easier for sellers to export on eBay.

Sellers on ebay can choose whether to offer an item for sale only to U.S. buyers, or to also make it available for international buyers (export). If they wish to sell internationally, then they need to figure out the customs and shipping process for foreign destinations.

eBay introduced a new program called the Global Shipping Program (GSP) to reduce the hassle of selling abroad. Sellers participating in this program simply ship the items to a U.S. shipping center in Kentucky. A third-party company then makes sure the items are intact, and handles the whole exporting process from then, preparing the necessary customs forms, sending importing charges that have been pre-paid by buyers, and choosing a shipping service with tracking and insurance. It is free for sellers to use, and costs no more for buyers, with the third party making its money from bulk processing of these transactions. It began by offering service to 18 export destinations in 2013, with this expanding to 42 destinations by the end of 2013 and currently covers more than 60 destinations. The picture below shows what this looks like for a buyer in Canada: 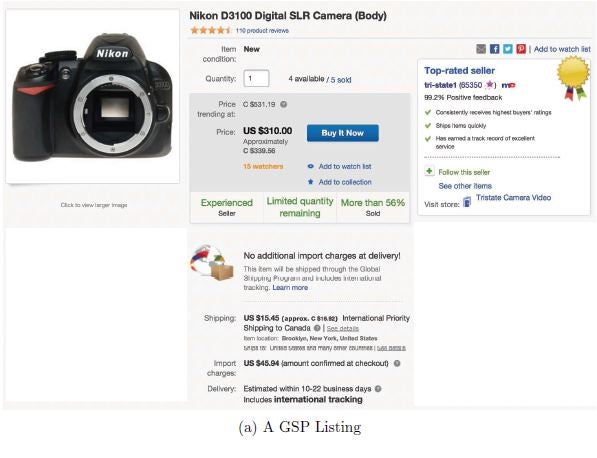 The Experiment
Before this was rolled out to all its customers in the U.S., eBay randomly chose 20% of active users to offer the chance to early enroll in the program, using emails, banner ads, etc. to encourage take-up. In the sample sellers on average export $165 to 7.3 countries in the pre-experiment period.

Results: Points to note:
The paper doesn’t discuss a lot of the details that would be standard in most write-ups of experiments –we don’t know what the sample sizes are, what the take-up rate for the encouragement design is, there is no table showing baseline balance or summary statistics, etc. But this is a massive scale-experiment – the paper does note that “The marketplace contains about 157 million buyers and 800 million live listings, with an average of 230 million clicks on item listings every day”. As a result the treatment impacts are highly significant since the standard errors are tiny.

Two key things I would note from this are: i) a relatively simple intervention can increase exports; but ii) the actual increase in exports is pretty small, and of a magnitude that is unlikely to be detectable with most firm experiments. The paper doesn’t report the summary statistics one would need for power calculations, but as a simple example, if exports to new destinations have a mean of $100 and standard deviation of $200, then to detect an increase of 2.7%, even treatment and control samples of 10,000 firms each would only have power of 0.15, and one would need 100,000 firms in treatment and control to get power of 85%. So this sort of low-cost export facilitation intervention is only going to have detectable effects in environments where massive numbers of firms are subject to it.
Topics
Trade

David, thanks for offering helpful discussions of the paper. Please allow me to make a few clarifying comments. First, I've added Table 1 in the paper to show the baseline balance between the treatment and control group. Unfortunately, I'm not allowed to discuss the summary statistics as per my data use agreement with eBay. Second, the take-up rate is around 6% of the 20% treatment group, and enrolled sellers are mostly small and medium-sized sellers who have never exported before. This implies a ATT(ToT) estimate of 45% (2.7%/6%), which is a reasonable estimate given the small size of enrollees. Finally,I am not allowed to report the precise number of my sample size, but it is in the order of millions.