Fact checking universal basic income: can we transfer our way out of poverty?

New York Times published an article last week, titled “The Future of Not Working.” In it, Annie Lowrie discusses the universal basic income experiments in Kenya by GiveDirectly: no surprise there: you can look forward to more pieces in other popular outlets very soon, as soon as they return from the same villages visited by the Times. One paragraph of the article drew my attention in particular: “One estimate, generated by Laurence Chandy and Brina Seidel of the Brookings Institution, recently calculated that the global poverty gap — meaning how much it would take to get everyone above the poverty line — was just $66 billion. That is roughly what Americans spend on lottery tickets every year, and it is about half of what the world spends on foreign aid.”

Well, I don’t know about you, but that paragraph makes me think that if we just were able to divert 50% of the current foreign aid budget towards cash transfers, we would eliminate extreme poverty. But, is that really true? The answer is: “not even close.”

See, that calculation assumes that we know exactly who is poor, how far below the poverty line each person exactly is, give them that precise amount, etc. (Actually, Zhang, Chandy, and Noe outline their simplifying assumptions in footnote 2 of this post.) How close are we to that in reality? Again, far away – at least in developing countries.

There are actually quite a few economists who have been working on targeting issues to reduce poverty for decades: two of them are Dominique van de Walle and Martin Ravallion. In a recent paper that they co-authored with Caitlin Brown (addendum here), they examine the best methods we have available for targeting poor people to see how they would fare in reducing poverty.

Their mental exercise is simple: suppose that you have enough money to eliminate poverty if you made all those simplifying assumptions you read above. Now, get rid of the assumption that is near impossible to satisfy, i.e. that you can correctly identify every poor person and give them exactly the difference between their income and the poverty line, and replace it with more reasonable ones used by policy makers. These policies include a universal basic income, targeting on the basis of basic proxy-means tests (PMT) most commonly used by governments and donor organizations, improvements to PMT they propose, and some simple categorical targeting options (such as targeting the elderly, children, widows, etc.). They then ask a straightforward question: by how much would each policy reduce poverty?[1]

Turns out, not by much. Or, more precisely, by less than 25% depending on your choice of poverty measure. Take a look at this table that I made borrowing figures from Tables 11-13 in their paper: 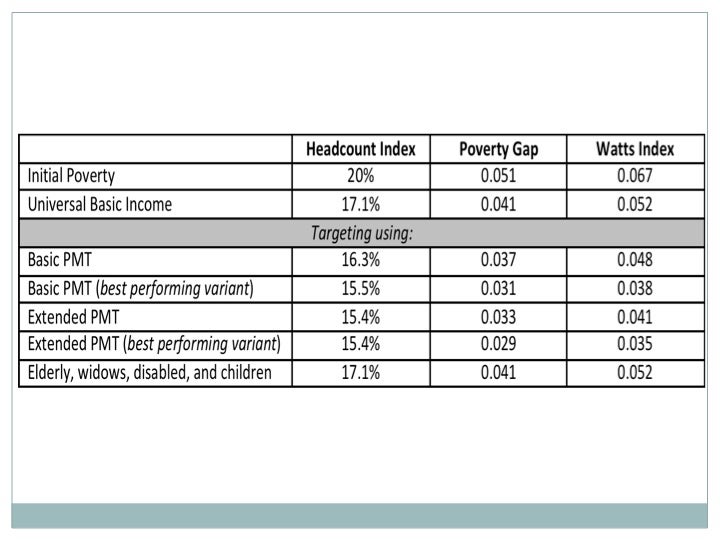 Several observations from this table: There are a couple of ways you can read these results. On the one hand, it’s hard to escape the depressing conclusion that, given feasible budget envelopes, working our way out of poverty using targeted (or untargeted) transfers does not seem realistic. On the other, one might say that given the poor performance of methods to target the poor in developing countries, the relative performance of UBI makes it appealing for consideration.

However, to come even close to eliminating poverty today (a claim made by Michael Faye of GiveDirectly in the same article), we would need much much more than half of the world’s foreign aid budget. Suppose that we gave 75 cents per day to everyone in the world, which would not eliminate extreme poverty, how much money would we need? If I am counting zeros correctly, about 2 trillion dollars, or about 30 times more than the $66 billion figure cited in the NYT article. Take away a couple of billion people in North America, Europe, Australia, and New Zealand: we’re still not close. And, that scheme would not eliminate poverty, even setting the poverty line at $1.9/day. What if we wanted people to actually live on closer to $8-10 per day…

So, my plea to media outlets covering this topic: consider requesting an interview with a few researchers who spent their entire careers worrying about poverty reduction (like this professor or this one, both of whom won awards for their work on poverty). There are a lot of reasons for us to consider UBI in the portfolio of possible policy choices towards poverty reduction. But, a little restraint and sticking to the existing research and facts would go a long way in creating a healthy debate.

P.S. It so happens that I co-authored a similar paper, which was published in the Journal of Development Economics 10 years ago. Below, please find Tables 2 & 4 borrowed from that paper, which show remarkably similar findings to those in Brown et al. (2016), but using geographic targeting (poverty maps) instead of PMT. Not only the poverty reduction via UBI vs. targeting methods is very similar (24% vs. 49% in the last column of Table 4 immediately below), but note the cost savings achieved by geographic targeting vs. UBI to achieve the same amount of poverty reduction. 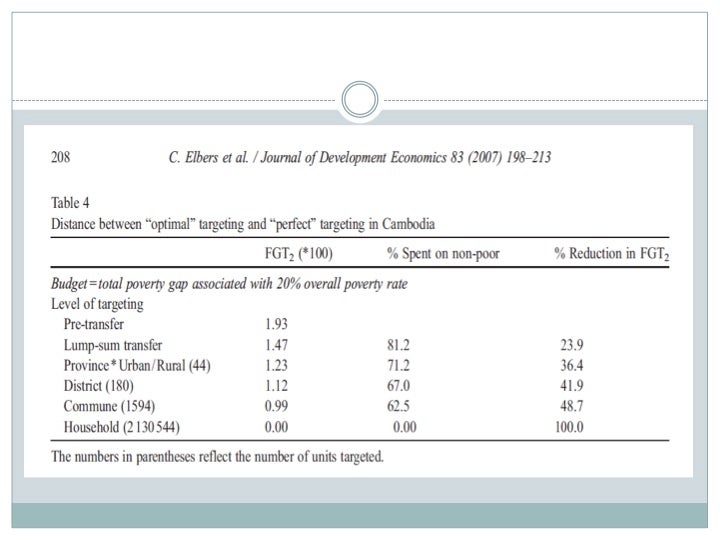 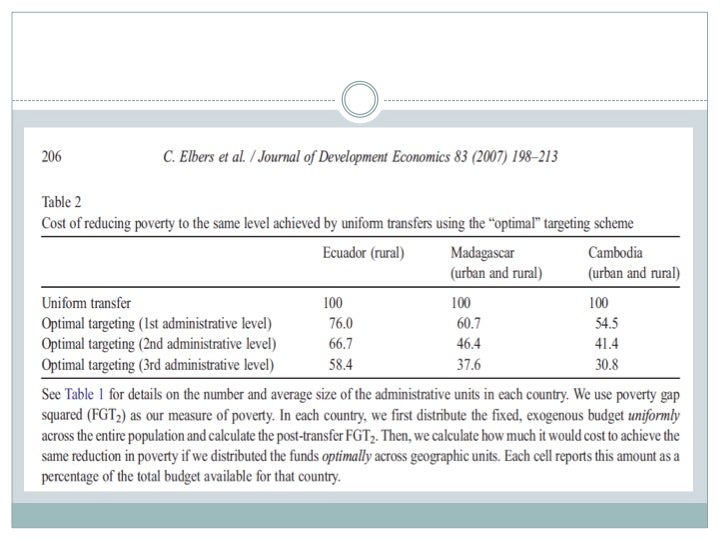 These are salient points and indicative of the general need for more nuance in the dialogue and debate on this issue. An additional layer I feel is critical yet almost universally ignored is that "foreign aid" and "development" get used in these transfer and UBI discussions as blanket terms meaning efforts to improve income-based poverty only. Yet didn't we all agree more than a decade ago that poverty is more than income? Development as freedom, and all? The argument seems to be that if we could bring everyone up to or over the poverty line with cash transfers, then voila, no more need for international development assistance...which is absurd. Development funding does more than improve incomes of people, and is necessary for actually enhancing the broader systems and services upon which these people (with their shiny new incomes) will rely upon. So I wish the debate about cash transfers could include a little more context about their relation to income, explained within the greater development ecosphere. They may (in some cases) improve income poverty, but they don't necessarily have a magic ability to make key health, education, or environmental institutions and services function and serve a country's needs. The latter would still need attention, and it's far-fetched to believe domestic resources and political will are sufficient.

The study does not take into account the tremendous increase in theft, robbery and state corruption that would victimize those unable to defend themselves and their new-found income in these impoverished areas. Academic idea, meet realpolitik.

Well. There is no evidence of this in tje case where this has been tried - so try again

Promotion I most hear about is of UBI in developed nations … a livable income paid to ALL there as a citizen dividend. It's always couched in words about justice & poverty, but the poor there would get no more our of UBI than they get out of the welfare it would replace. Only the employed would get the bonus & would clearly spend it on consumerism as they do any other increase in income.
The effect of UBI in developed nations would be a big boost in CO² emissions & a widening of the gap between developed & undeveloped nations. It's a real "me first" idea in the West & no thought for the rest of the world or for justice.

An economist crying for media atention gotta be one of the most saddest expressions that the academia bequeathed us.

I understand that the $ 66 billion a year is the amount needed assuming 100% accuracy in need. Of course, we have a problem with accuracy. Note in Table 4: 62.5 - 81.2% of it was off target. I wonder where the last item - Household - 0% outside the aim. Was it a tip? In any case, Table 2 shows that in practice remains to be done by tens of percent.
In the referenced article Worldbank http://www.worldbank.org/en/topic/poverty/overview rate of decline percentage points (linear regression), that in 2017 it amounts to 6.9% of the population, or 508 million people. So a person would be accounted 36 cents a day. It would increase income by an average of 23% - a significant amount, is not it?
Let us remember that we are talking about the minimum income $ 57 per person per month, and so on liquidation of extreme poverty and not poverty.