This is the seventeenth in this year's series of posts by PhD students on the job market.

Aquinos, Bhuttos, Trudeaus, Yudhoyonos, Gandhis, Lees, Fujimoris: political dynasties remain ubiquitous in democratic countries.  Though many societies democratised to end hereditary rule, nearly half of democratic countries have elected multiple heads of state from a single family.  Politics is significantly more dynastic than other occupations in democratic societies.  Individuals are, on average, five times more likely to enter an occupation their father was in.  But having a politician father raises one's odds of entering politics by 110 times, more than double the dynastic bias of other elite occupations like medicine and law.  Despite their prevalence and influence, we know little about the economic effects of political dynasties.

Economic theory makes ambiguous predictions about how dynastic politics affects development.  On the one hand, bequest motives might lengthen politicians’ time horizons  and encourage them to make long-term investments. These founder effects could be good for economic development.  However, if some political capital is heritable (e.g., a prominent name or a powerful network), dynastic politics may render elections less effective at selecting good leaders and disciplining them in office.  These descendant effects are likely bad for development.  The overall impact of dynastic politics is ambiguous, because it is the net result of founder and descendant effects.

We study the economic impacts of dynastic politics in India, where legislators play a significant role in local economic development, and the merits of dynasties are publicly contested.  We identify family ties between politicians by compiling detailed biographical information on all members of India's national parliament (MPs) since 1862, when Indians were first allowed to serve in the British-era legislative assemblies.  We document that political dynasties are widespread in India: 10% of MPs are children of former MPs, which is nearly 2,500 times higher than random chance would predict, and over 35% of villages have been represented in the national parliament by at least one dynastic politician. 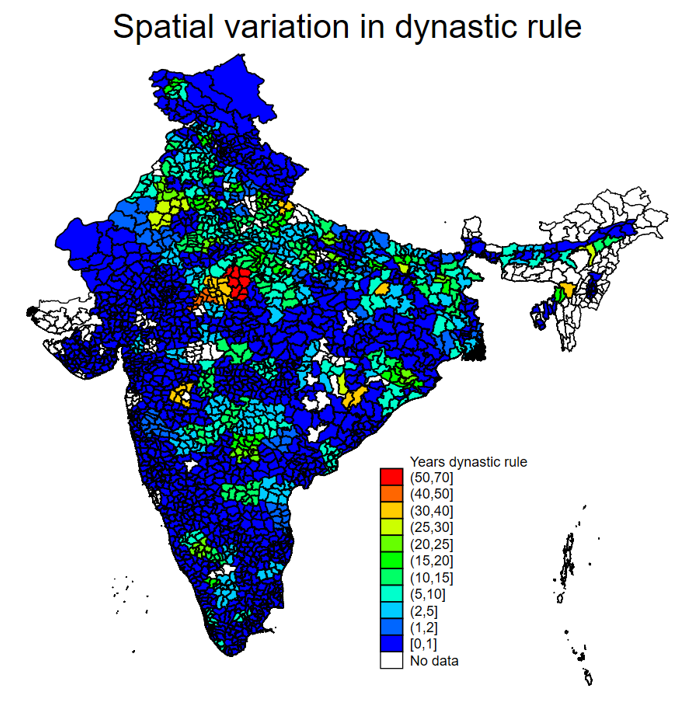 Dynastic descendants are bad for development

First, we identify descendant effects using a close elections regression discontinuity (RD) design. We focus on close races between dynastic descendants (i.e., direct relatives of former officeholders) and non-dynasts, and compare places where a descendant narrowly won to those where a descendant narrowly lost. In these elections, descendants and non-dynasts have similar demographic and political characteristics, and they win in similar places and at similar rates. Nevertheless, we find that villages are poorer and have fewer public goods after being represented by a descendant for an electoral term.  Households are less likely to live in a brick house and to own basic amenities like a fridge or mobile phone.  An additional standard deviation of exposure to descendants lowers a village’s wealth percentile by 12 percentage points (i.e., a village at the median wealth level in a district would be at the 38th percentile after a term of descendant rule).

Moral hazard is one reason that descendants underperform. Descendants face moral hazard because they inherit voters loyal to their family predecessor (typically a father), dampening incentives to exert effort and perform well in office.  A significant fraction of political capital appears to be heritable: the parent-child vote share correlation is 0.23, about one-third as large as the correlation between a politician's own vote shares in different elections.  We isolate the effects of moral hazard on performance using constituency boundary changes, which affect the overlap between a descendant's electoral district and her predecessor's former electoral district.  Redistricting provides a shock to the number of votes a descendant inherits each election.  The same descendant earns 1.2pp more votes and completes 2.8pp fewer projects when redistricting increases the spatial overlap between her constituency and her father's former constituency by 10%. Overall, moral hazard explains about 40% of the performance gap between descendants and non-dynasts.

Bequest motives are good for development

Second, we show that bequest motives encourage politicians to perform better in office.  To test whether bequest motives affect in-office behaviour, we identify a shock to politicians' time horizons.  Women face significant barriers to enter politics in India (only 9% of candidates are women). As a result, conditional on the number of children, politicians who have a son are twice as likely to found a dynasty (relative to politicians with only daughters), even though they appear similar on most demographic and political characteristics. Politicians with a son exert more effort while in office: they are 2pp more likely to complete local development projects (even conditional on the same implementing agency), 6pp more likely to hold the stipulated quarterly meeting with local bureaucrats to take stock of constituency development work, and are assessed by voters to perform better in office. 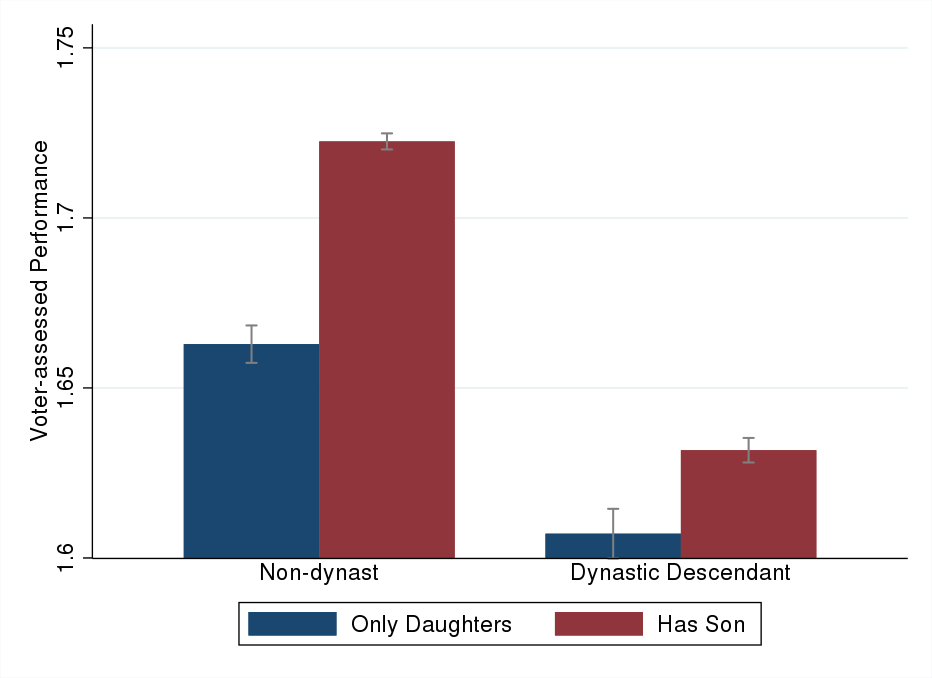 If fathers are good and sons are bad, what is the overall effect of dynastic politics?  To estimate the overall effect of a dynastic political environment, we attempt to simulate the ideal experiment of going from a world where dynasties are not possible to a world where they are possible.  Recall that (i) having a son increases a politician’s chance of establishing a dynasty and (ii) sons typically run in their fathers’ constituency.  As a result, a place represented by an MP with a son in generation t is more exposed to founder effects in generation t and descendant effects in generation t+1.   Places “blessed” to be represented by an MP with a son thus initially develop faster than places represented by MPs with only daughters, due to positive founder effects.  But they fall behind once the second generation of politicians enters politics and the sons inherit their fathers’ constituencies, due to negative descendant effects.  In our sample, the negative effects of descendants so outweigh the positive effects of founders that by the end of our sample period, places represented by an MP with a son in generation one (the first three decades after India’s independence) are poorer and have fewer public goods at the end of generation two (in 2012).  Dynastic politics has an overall negative economic effects and results in a distinct “reversal of fortune” development pattern that is consistent with the lifecycle of a dynasty, but inconsistent with the most obvious confounding explanations (e.g., unobserved differences between politicians with sons and politicians with only daughters). Moreover, both the initial positive effect and the subsequent negative effect are absent in strongholds of parties with norms against dynasties, like the Communist parties. Overall, a standard deviation increase in exposure to dynastic rule lowers a village's wealth percentile rank by 7pp. 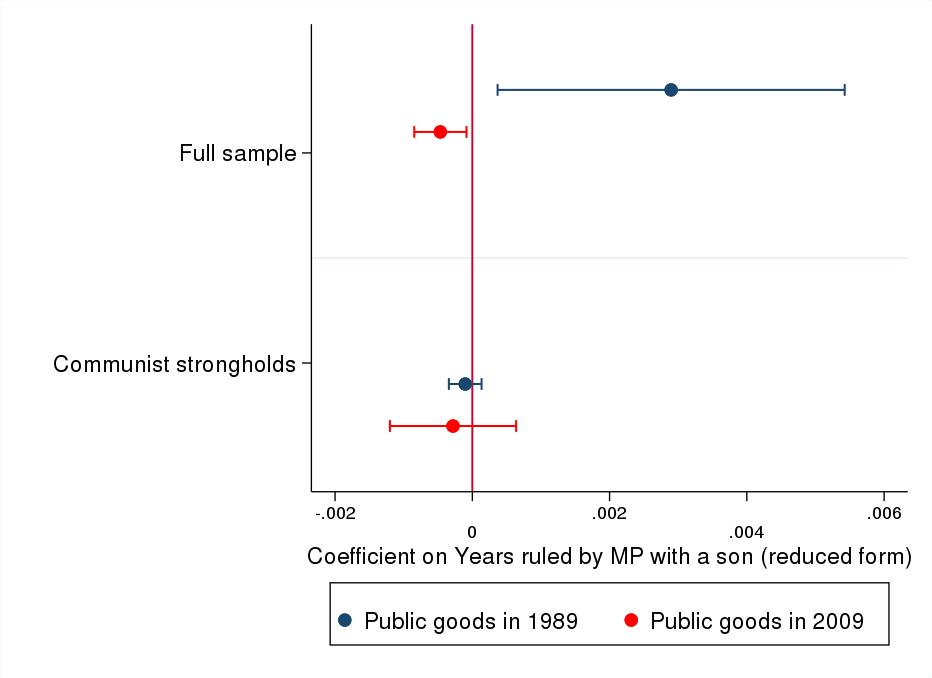 A simple theory of dynastic politics

These empirical facts are consistent with a simple theory of dynastic politics, whose key element is that  both human capital (e.g. governing ability) and political capital (e.g., name recognition, network) are heritable.  Heritable human capital creates signalling incentives for parents to perform well in office and signal that their descendant is competent.  But inherited political capital allows descendants to persist in power even when they underperform.

Our results imply that heritable political capital weakens the ability of elections to select talented leaders and discipline them while in office.  Our findings also suggest that a significant portion of inherited political advantages appear to be local.  Policy tools to limit the ability of children to run in their parents’ former constituency – such as those currently being considered by the Philippines Senate – may help discipline dynasties and perhaps even harness dynastic incentives for good.

Siddharth George is a PhD student at Harvard University.