How to attract and motivate passionate public service providers

In Gaile Parkin's novel Baking Cakes in Kigali, two women living in Kigali, Rwanda – Angel and Sophie – argue over the salary paid to a development worker: "Perhaps these big organisations needed to pay big salaries if they wanted to attract the right kind of people; but Sophie had said that they were the wrong kind of people if they would not do the work for less. Ultimately they had concluded that the desire to make the world a better place was not something that belonged in a person's pocket. No, it belonged in a person's heart."

It's not a leap to believe – like Angel and Sophie – that teachers should want to help students learn, health workers who want help people heal, and other workers in service delivery should want to deliver that service. But how do you attract and motivate those passionate public servants? Here is some recent research that sheds light on the topic.


Are health workers motivated by their sense of mission or by their inherent interest in the work? In Burkina Faso, Banuri, Keefer, and de Walque played a game with nursing and medical students to find out. Students were assigned to carry out one of three tasks for two-minute intervals, and they could carry out the task as many times as they wanted over the course of half an hour. Two of the tasks were excruciatingly boring – literally stare at a blank screen or (in a big jump in excitement) move shapes across a computer screen. One of the tasks was likely interesting to would-be medical professionals: watch videos of a patient describing symptoms and propose how to treat the patient. Effort was gauged by the number of times the students elected to do the two-minute task in half an hour. It’s not a surprise that students put in much more effort when the task is interesting. They completed the high-interest task two and a half times more than either of the boring tasks.

In order to gauge how much a sense of mission affected motivation, half the students participating in each task receive an additional offer: for every time they complete the task, a poor school in Burkina Faso (of which they see pictures of the building and the students) receives a donation. (In this narrow setting, even staring at a blank screen can benefit education.) Having that mission increased effort for students on the boring tasks, but it made no difference on the interesting task. In addition, the increase in effort from the mission was much smaller than the increase in effort when going from a boring task to an interesting task, as you can see in the figure below. As the authors put it, “Campaigns reinforcing organization missions are likely to yield positive impacts on effort among low-motivation tasks. Importantly, however, matching workers to tasks that motivate them seems far more important for effort than mission matching.” So the mission matters, but mostly for the busywork, not the substantive tasks that – hopefully – service providers find inherently interesting.

When recruiting service providers, should you emphasize the mission or the career? When the Zambian government introduced a new health worker position into its civil service, Ashraf, Bandiera, and Lee worked with them to test how to draw the best performers into public service. In some districts, advertisements for the new positions emphasized helping the community as the principal benefit, as you can see in the ad below. Local, non-civil servant health agents were listed as peers. In other districts, ads emphasized career advancement and the peers listed were doctors and nurses. The “career ad” resulted in applicants with “better skills” and “stronger career ambitions.” But here’s a surprise – we might expect that the career ad would draw less socially minded individuals. Ashraf et al. tested the pro-sociality of the candidates, and while it’s true that the average candidate in the career ad communities was less pro-social, the most talented candidates – the ones who ended up being selected – were just as pro-social as the most talented candidates in communities with a community-focused ad. 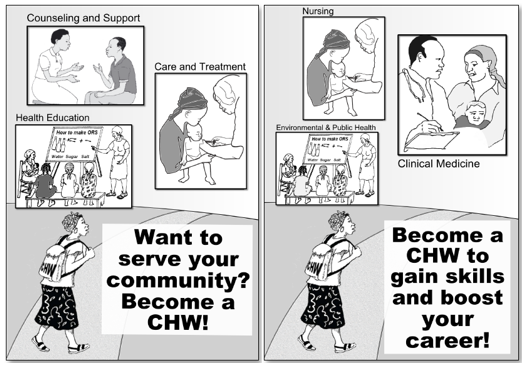 But how does this translate into actual effort? Once hired, all health workers received the same information on career opportunities and on social impact. They all trained at the same training school over the course of a year. So subsequent performance is unlikely to be due to an emphasis in the initial advertisements, but rather because of the different traits of the workers. And once they got out of training, those traits translated into outcomes. The health workers hired in districts with the career ad held more community meetings, made household visits, and they saw observed higher rates of women giving birth at health centers, higher rates of child immunization, and better health outcomes in the households in their communities. A policymaker I met in an East African country told me one of their greatest priorities was to get the “right people” to be teachers. This evidence from Zambia suggests that he’s right, and that attracting career-minded individuals can prove the difference between quality services and weak services.

So how do you attract these higher performing individuals? Salary is the most obvious tool, and indeed, experimental work in Mexico by Bó, Finan, and Rossi shows that an offer of higher salaries for new civil servant applicants results in applicants with higher IQ scores, higher scores on some personality traits, and no indication of less public sector motivation. (Goldstein has a useful summary of their paper.) And – in an important bonus – the higher salaries resulted in higher acceptance of jobs by applicants once offered, even in remote communities. Comparing teacher salaries across countries, Hanushek, Piopiunik, and Wiederhold show that countries that offer higher salaries to teachers have teachers with higher cognitive ability, and that translates into higher student performance. (This is an association, but it does stand up to a fair amount of scrutiny.) 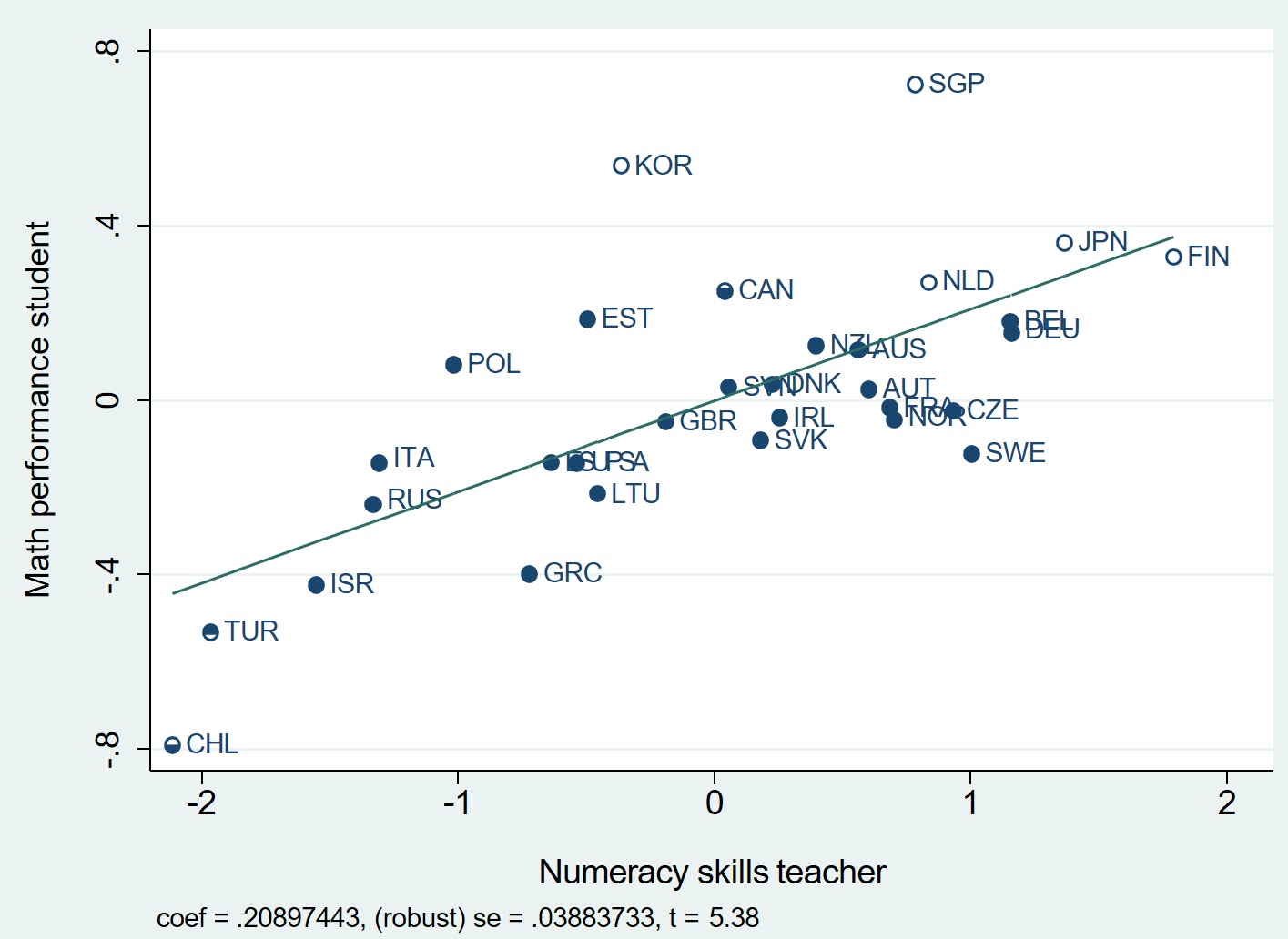 But there’s a cost-effectiveness problem with simple salary increases. They may draw better candidates into service delivery – although Bau and Das argue that salary reductions actually didn’t affect the quality of teachers in Pakistan – but even if salary increases do draw the best candidates in, salary increases have little or no impact on the effort of those already in the profession, according to the experiences of both Indonesia (per de Ree et al.) and Zambia (per Chelwa, Pellicer, and Maboshe). For cost-effectiveness, this is pretty damning: here I quote my own take on De Ree et al. – “Because the total supply of teachers turns over slowly, the vast majority of those benefits would be realized far in the future, despite massive budget increases today – paying a bunch of teachers who are not becoming more effective as a result of the salary increase. So by a reasonable discount rate, this is not a cost-effective investment.”

Linking pay to performance in some way could attract high performers while not increasing the salary of current poor performers. The empirical evidence on linking pay to performance – among teachers, at least – is extremely varied, resulting in either gains in student performance in India, gains dependent on complementary interventions in Tanzania, gains linked to more coaching sessions in Kenya, and widely varied impacts in the USA. So the devil is likely in the details of the implementation and in the context.

But none of these studies show us the impact of performance pay on recruitment of civil servants. There is supportive evidence that restructuring teacher pay attracts better candidates from the U.S. In Wisconsin, teacher quality (as measured by test scores) and teacher effort both increased in districts that adopted flexible pay which included paying high-performing teachers more (Biasi). Across national U.S. data, districts with pay-for-performance “to reward excellence in teaching secured new teacher hires who graduated from colleges and universities with average incoming SAT scores that were about 30 points higher than the new teacher cohorts hired by districts that did not adopt PFP” (Hartney, reporting on Jones and Hartney). There is a forthcoming study from Rwanda that will shed further light on this question. A teacher incentive program with large impacts on current teachers' performance -- like the one tested in India -- that also draws higher performing candidates into the profession might be a tall ask, but it would be a win for the present and the future.

Thanks, Dave, for these reviews and the relevant connections you have made in this post. Let me add two useful references related to attracting and motivating public sector workers.
First, I was familiar with Ashraf et al. (2016) and Dal Bó et al. (2013), but it was only until I read Duflo's The Economist as Plumber paper that I became aware of Deserrannos (2017). This paper covers an experiment in Uganda that introduces variation in the salience of financial earnings in ads for health promoter jobs, and finds different results from these other studies—there is crowding out of prosocial motivation in this case. Moreover, among those selected for the jobs, being prosocial turns out is the key predictor of retention and performance. Below I quote from the last version of the paper I was able to track (and include the link) in which the author tries to reconcile the conflicting evidence:
“My paper shows that the selection effects found in these two papers (e.g., the lack of motivation crowding-out) may not generalize to jobs in which the recruiter is not as well-known and which do not consist of a single type of task. Whenever there is uncertainty about the job, I show that financial incentives can provide information about the job and backfire if they attract the wrong type of workers.”
https://docs.google.com/viewer?a=v&pid=sites&srcid=ZGVmYXVsdGRvbWFpbnxl…
I also include a link to Deserranno's blog-post in this space back in 2014. https://blogs.worldbank.org/impactevaluations/does-higher-pay-attract-b…
Second, on teacher motivation, you discuss performance incentives on the job, but how about accountability through school inspections? Using panel data from India, Muralidharan et al. (2017) find that teacher monitoring via inspectors may be an order of magnitude more cost-effective in reducing teacher absenteeism and thus in decreasing the effective pupil-teacher ratio (net of teacher absence) than hiring more teachers.
The link to that paper is below.
https://www.sciencedirect.com/science/article/pii/S0047272716301621?via…