How do entrepreneurs in the poorest countries navigate taxes? Guest post by Gabriel Tourek

This is the ninth in this year's series of posts by PhD students on the job market.

In low-income countries, small firms account for the majority of taxpayers (World Bank 2011). Yet we know little about how they navigate taxation.  Existing research in the developing world focuses mostly on middle-income countries (Pomeranz 2015; Best et al. 2015; Brockmeyer and Hernandez 2018), and there is good reason to think that the tax behavior of firms in the world’s poorest countries might look different.  On the one hand, higher credit constraints may undermine entrepreneurs’ ability to meet their tax obligations. On the other, limited resources for tax oversight might create gaps in enforcement that allow firms to evade taxes more easily.

The question of how such firms respond to taxes is a consequential one.  It matters both for governments’ ability to raise revenues, in places where funds are much-needed, and for the take-home earnings of large populations of poor entrepreneurs.

My job market paper explores how small firms in Rwanda respond to a change in tax incentives. Rwanda provides a useful setting to study small firms’ tax behavior because such firms comprise 99% of all taxpayers.  Rwanda is also a representative low-income country, ranking as 18th poorest in the world (IMF 2018). I focus on entrepreneurs that are earning less than USD $4,000 per year.

I first document surprising responses to a tax reduction.  I study how firms respond to an income tax reform that universally lowers taxes in Rwanda. The average size of the reduction that firms receive amounts to a 40% tax cut. Standard economic models would predict that firms should pay less when liability decreases. Instead, I find that firms on average increase the amount of earnings they report to the tax authority by 100% and increase the amount of taxes they pay by 75%, relative to what they had declared and paid before. This effect persists six years later.

This is a counterintuitive response. It cannot be explained by firms growing as a result of the tax cut or changes in the economy unassociated with the reform. I find no evidence of simultaneous changes in sales and employment.

To understand this puzzling result, I designed and implemented a survey of 1,000 taxpayers that I matched to their administrative declarations. The key finding is that firms possess poor information about their own earnings. In general, the ability of entrepreneurs to estimate what they earn on an annual basis is low.  Only half of firms keep any form of accounts or receipts, of which approximately 90% are handwritten logs of transactions. Only 15% employ accountants.

Such constraints in tracking annual earnings may undermine entrepreneurs' ability to measure the revenues that determine their tax obligations. Uncertainty about one's true taxable income generates uncertainty about true liability, presenting scope for firms to rely on heuristics or rules of thumb.

I find evidence of a specific heuristic: targeting of past liability, or consistently paying the same amount of liability year after year. Using the universe of administrative tax filings over a ten year period, Figure 1 shows that in approximately half of all filings, the amount paid by a firm is identical to the amount paid the year before. 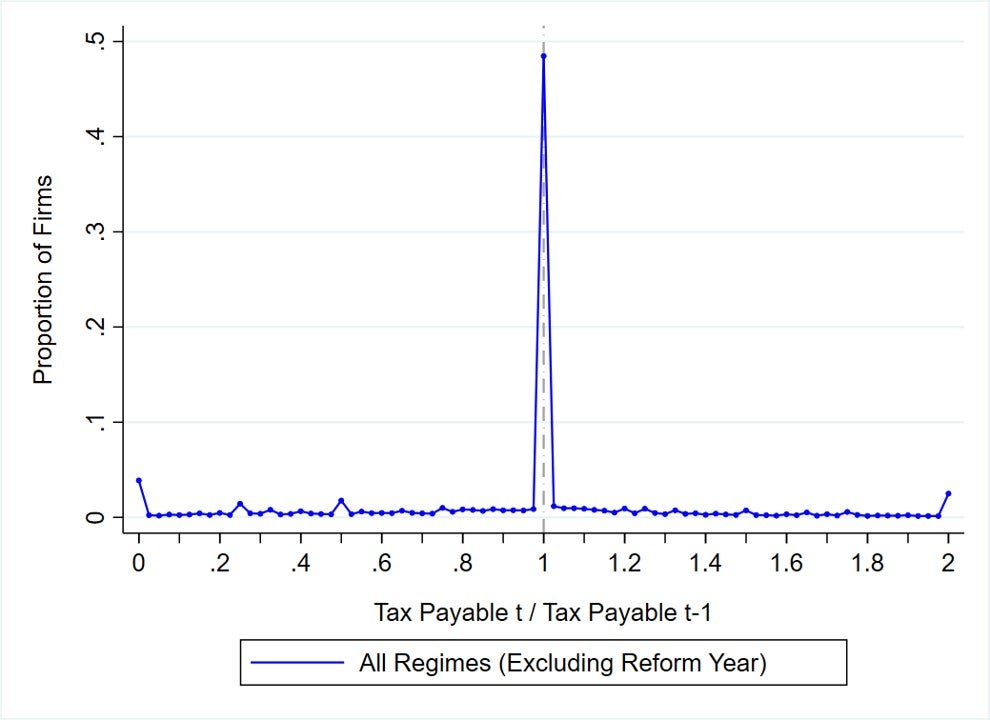 Traditionally, we think of entrepreneurs tallying up their taxable earnings at the end of the fiscal year and checking the tax schedule to figure out what they owe.  However, in Rwanda, the proportion of firms that pay identical amounts year-to-year is far above what we would expect given that firms in this region typically grow between 1 and 5% per year (World Bank 2018).  Entrepreneurs may “target” payment amounts rather than taxable income amounts, because the former is observable year-to-year while they encounter substantial uncertainty in estimating the latter.

Importantly, targeting behavior correlates strongly with uncertainty in taxable income. Firms that do not keep records, lack accountants, and do not pay other types of taxes are much more likely to target their past liability year after year. Measures related to enforcement, access to public goods, and views of the state are uncorrelated with this behavior.

Can the targeting heuristic explain why firms pay more?

I then examine how targeting behavior interacts with the reform.  Though the reform lowers taxes for everyone, different taxpayers receive distinct changes in the structure of their liabilities.

Linear Taxpayers: Post-reform, some firms are assigned to a “linear” regime, which reduces their marginal tax rate by 25%. These firms increase taxable income by 30% on average, paralleling the predicted targeting response of 33% to a 25% rate cut: TI' = TI X (0.04/0.03). Despite the change in rate, the effect on tax paid is zero, and these firms bunch sharply on the amount of taxes they paid in the year before the reform. That firms increase taxable income but stick to previous liability implies that payment amounts are the salient target rather than reported earnings.

Lump Sum Taxpayers: Other firms are assigned post-reform to a new schedule that converts liability to lower, lump sum amounts. The change in schedule removes these firms’ ability to pay the same amount as before at their pre-reform levels of taxable income. I find that these firms on average move to higher tax brackets, where post-reform liability is greater but more closely approximates their pre-reform payment level. This movement, however, involves approximately doubling reported taxable income and tax paid, driving the overall average effect. These firms are more likely to move to higher liability points the closer their pre-reform liability is to the level of liability available at higher brackets under the new schedule, implying that, like linear firms, lump sum firms target past payment amounts, even when the structure of liability changes. 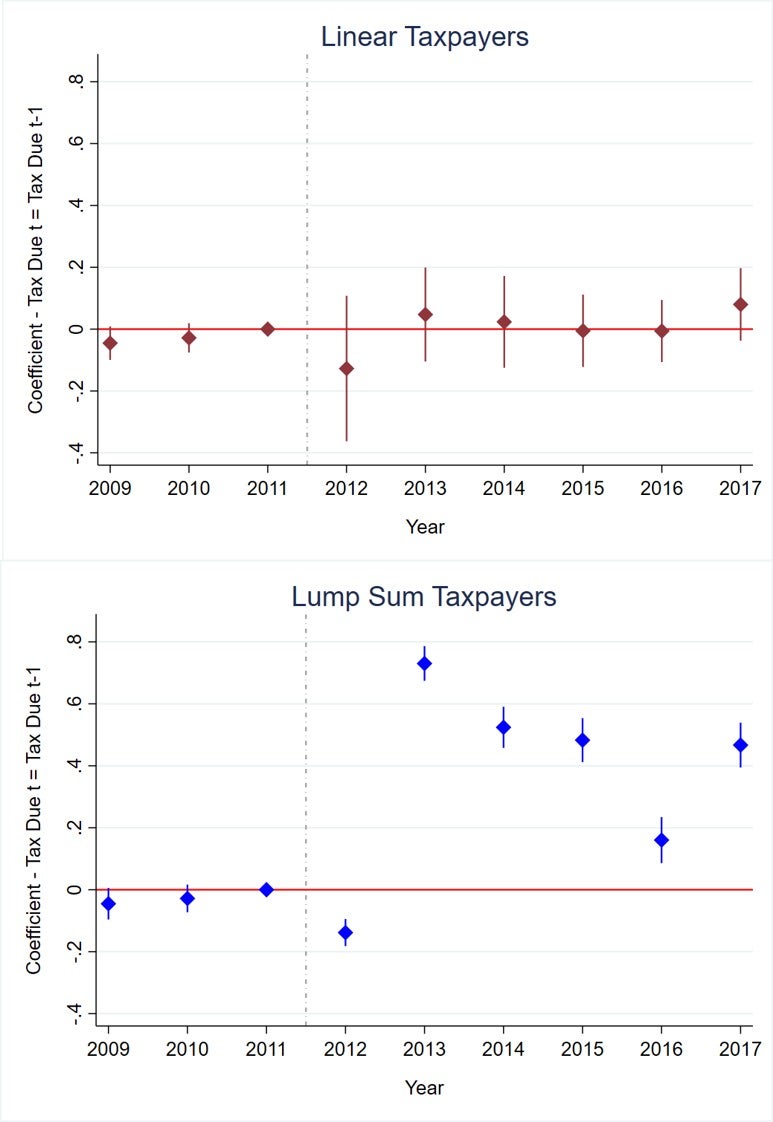 Firms err on the side of paying more when presented with the option of moving up or down from previous payment levels. As a result, tax payment ratchets up.  A high level of perceived enforcement may explain why: in the survey, firms report audit likelihoods of 48% on average, and 75% are aware of the existence of penalties for evasion, which include large fines and business closure. Entrepreneurs may believe the cost of higher taxes is worth the potentially higher cost of fines for underreporting if they are selected for audit.

These results relate directly to recent efforts to simplify taxation in low-income countries. Reforms of the type I consider are increasing in prevalence and typically affect large shares of tax bases (Coolidge and Yilmaz 2016). As developing country governments seek to craft tax policy to generate revenues, understanding how firms respond and the impacts of design choices on production and welfare are essential to designing tax systems that can be sustainable in the long-run. A promising avenue for future research lies in a more thorough mapping of firms' tax behavior, to understand how it shapes responses to taxation and to identify alternative tax policies that could align behavioral responses more closely with objectives.

Gabriel Tourek is a Ph.D. Candidate at Harvard University.