Inside the black box of participatory democracy: leadership and inclusion in self-help groups: Guest Post by Miri Stryjan

This is the ninth in our series of posts by students on the job market this year.

In developing countries a large fraction of public and financial services are provided by NGOs and mediated by community groups. These organizations are typically external rather than native to the communities where they operate and it is believed that increasing local ownership can improve legitimacy and sustainability of development programs. For this reason development organizations are increasingly turning to participatory decision-making practices. A notable example is the World Bank’s focus on ”Community Driven Development”-projects in the last decade (See Mansuri and Rao (2013) for a review). Previous studies that evaluate Community Driven Development projects point to several advantages of direct local participation compared to central decision making by an NGO or by representatives (see e.g. Olken (2010), Beath et al. (2012), Madajewicz et al. (2014)). Yet, so far we know very little about the relative benefits of different types of direct participation. For example: can we expect a secret ballot vote to be comparable to an open discussion in a village meeting?


I address this question in my job market paper where I compare two directly participatory decision-making procedures and apply them to the decision of selecting leaders for self-help groups. The two electoral rules compared are secret ballot voting and open discussion with consensus. These are the most common ways to structure decision making in direct democracy settings, i.e. in setups in which decisions are made about policy outcomes. Random assignment of the electoral rule to groups, allows me to causally estimate the effect of the electoral rule on outcomes while avoiding the endogeneity problems inherent in the study of electoral systems and leaders.

Background and experiment
Access to savings among the world's poor is widely considered to be too low. A number of recent studies seek to understand how to encourage savings among the poor (Dupas and Robinson, 2013a and Dupas and Robinson, 2013b). For people living below the poverty line, informal financial institutions for saving such as Self-help groups or Village savings and Loan associations are more accessible than banks. Our study examines such a self-help program operated by the NGO BRAC in the most impoverished region of Uganda: Karamoja. Its members are organized in saving groups, each group jointly keeping a savings fund from which members can take loans. The aim is to empower and improve livelihood options for young women and to target the most vulnerable groups in society. After an initial period of saving with the NGO, as a step toward sustainability, groups became self-governed through a managing committee ("leaders") consisting of group members. Before leader election 46 groups were randomly assigned to elect their leaders through secret ballot, majority rule voting ("vote groups"). In the remaining 46 groups, leaders were nominated and agreed upon in an open discussion with consensus ("discussion groups"). Both procedures took place at a meeting attended by all group members. The degree of openness in decision-making varies between these two electoral rules and I expect this to affect the decision outcomes, that is, the types of leaders selected. This can in turn impact on the performance of the groups, which I explore in a next step.

Does the electoral rule affect the type of leaders elected?
Using data collected on group members before the leader selection I find that vote groups elected leaders who were more representative of the average group member in terms of economic status while discussion groups chose less representative leaders that were richer and more educated than the average member. For example, leaders in discussion groups were 44 percent more likely to have employment connections and 26 percent more likely to have no education compared to the regular members. They also had larger asset holdings and scored significantly higher on a wealth index. The distribution for the wealth index for regular members and leaders is illustrated in the figure below, which shows that leaders in discussion groups place themselves higher in the wealth distribution than regular members while the wealth distribution for leaders in vote groups closely follows that of regular members. Meanwhile in vote groups there were no statistically or economically significant differences between leaders and regular members on economic variables. These findings are consistent with representation and elite capture where open participatory selection procedures give power to those already powerful, something which has been shown in different settings by Baland and Robinson, 2008 and Hinnerich and Pettersson-Lidbom, 2014. 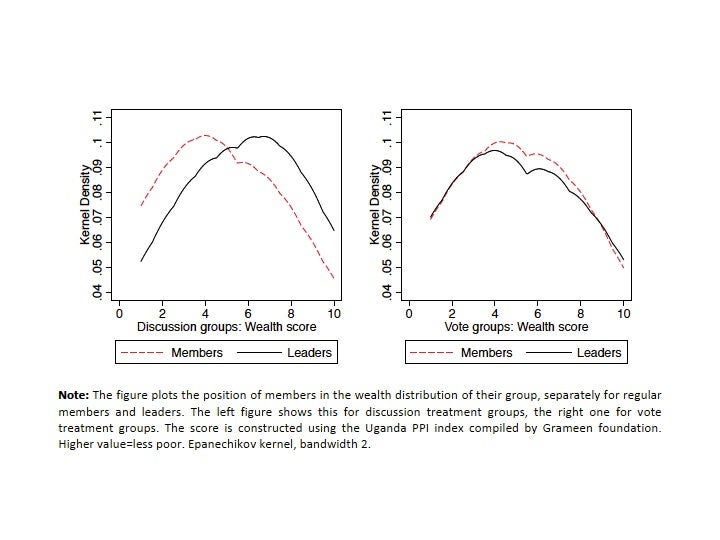 Does this matter for group performance?
Since the stated goal of the program is to extend savings and loan access to the most vulnerable, one important performance measure is continued membership. While dropout in the first year was high in both types of groups it was 32% higher in discussion groups. Moreover I observe heterogeneous dropout rates with the poorest members being more likely to leave discussion groups. Members of discussion groups who kept savings at baseline were 32 percent less likely to leave than those with no initial savings, and members with income from market activities at baseline were 17 percent less likely to leave these groups than those with no market income at baseline. In vote groups, dropout does not appear to be driven by initial socio-economic level. These heterogeneous dropout patterns are in line with committee members elected under the vote treatment having policy preferences closer to those of the average member.

To sum up, open discussion led to a more positively selected set of leaders, less representative of the average group member than the leaders elected in secret ballot voting. Over time, the poorest members left discussion groups, which ended up smaller and with a more selected set of members than vote groups. Importantly, members who dropped out of groups were significantly less likely than stayers to have access to saving or loans at endline, 3.5 years after leader selection. To the extent that access to savings and credit is instrumental for poverty reduction, it thus appears that the discussion treatment compared to the vote treatment led to lower welfare for the economically vulnerable, the very group that this self-help program is targeting.

Conclusion
When services are provided through community groups, the role of group leaders can be crucial. I show that the way in which leaders are elected affects their representativeness and that this has an impact on who gets continued access to the groups' services. The members of the groups studied here are all young and female and each group recruits members from within a small geographical area. In more diverse groups the difference in openness in decision-making between these two electoral rules is likely to have an even larger effect on outcomes.

Miri Stryjan is a PhD Candidate at the Institute for International Economic Studies (IIES), Stockholm University. She is currently on the job market.