We continue our series of highlighting our recently recruited researchers. Today we cover researchers who work on the environment, infrastructure and sustainability, and on poverty and public economics – noting again that these labels do not cover the full range of topics being studied. 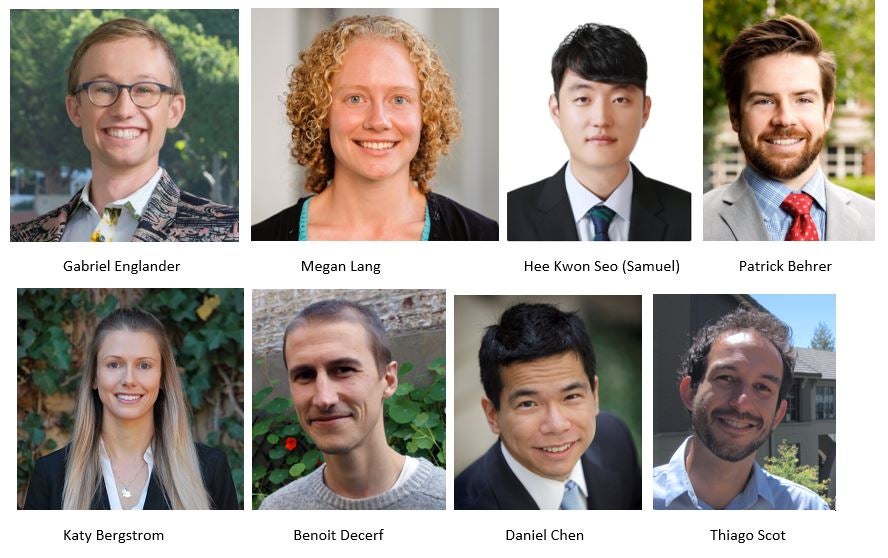 Gabriel Englander studies how policy and illegal behavior affect wildlife conservation. He hopes to provide cross-support in the areas of marine fisheries, terrestrial wildlife conservation, forests, and land use. He shows in his job market paper that when regulators in Peru try to protect juvenile fish by temporarily closing specific areas of ocean, they inadvertently provide information about the location of schools of fish, resulting in large spillovers that cause the policy to backfire. Gabriel will earn his PhD from UC Berkeley’s Department of Agricultural and Resource Economics this May and spend one year as a postdoc at UC Santa Barbara before joining DECRG in August 2022.

Megan Lang studies issues of sustainability, with a particular focus on energy access and a secondary interest in gender equality. In her job market paper, she shows that transaction costs for pay as you go solar severely limit demand among consumers in rural Rwanda who cannot buy in bulk, while causing wasteful consumption among those who can. Her paper highlights how non-price factors like contract structures and rural infrastructure shape demand for basic electricity. Megan plans to continue exploring linkages between sustainable development, energy access, consumer behavior, and rural infrastructure and is eager to provide cross-support in these areas. She will graduate with her PhD from UC Berkeley’s Department of Agricultural and Resource Economics in May 2021, spend one year as a postdoctoral fellow with JPAL’s King Climate Action Initiative, and join DECRG in July 2022

Hee Kwon Seo (“Samuel”) is a research economist at the Development Impact Evaluation (DIME) group under the Development Economics Vice Presidency (DEC) of the World Bank. Samuel’s research spans across development topics--from education and poverty alleviation to energy, infrastructure and climate change--combining models of economic behavior with data to understand how communities cope with challenges and may achieve more efficient and equitable results.  In the education and infrastructure space, he has been evaluating two projects in Tanzanian since 2015.  One evaluation provided solar electricity and digital media to off-grid schools, quantifying achievement effects.  Another evaluation, motivated by low achievement rates in high-school mathematics (more than 80% failing to pass), provided a mix of traditional and technology-based learning materials as well as scholarships to understand structural learning barriers and how student responses to these provisions broken down by question type may be used to inform national curriculum design (in progress).  In the poverty-alleviation space, with co-author Justin Leung, he has been studying how providing electric benefits for food (US’ second largest welfare program) affects retail prices and welfare nationwide.  Also in the infrastructure space, he has been part of a team evaluating the social impact of Dar es Salaam’s Bus-Rapid-Transit (BRT) infrastructure within the context of Tanzania’s Second Central Transport Corridor Project and Urban Transport Project.  Finally, with the Climate Impact Lab, he has been studying how climate shocks affect mortality rates and adaptation costs in different nations across the globe—and how communities may respond to these challenges in more efficient and equitable manners.  He is interested in learning about and getting involved in operational work broadly across topics including, but not limited to, infrastructure, climate change and conscientious growth.

Patrick Behrer’s research is focused on the causes and consequences of air pollution and the role of adaptation in reducing the impacts of climate change. He is also interested in the role of property rights and regulatory reform in reducing pollution. He is excited to provide cross-support on projects relating to any of these issues, particularly adaptation to climate change.  His job market paper examined the role of the Indian NREGA program in increasing crop residue burning in India and the consequences of this increase on Indian air pollution. His other recent work has focused on the long-term impacts of heat on student performance globally and the role of regulatory reform in reducing water pollution in the U.S. He received his PhD from the Harvard Kennedy School in May 2020 and will join DECRG in September 2012 after a year as a post-doc at Stanford University’s Center on Food Security and the Environment.

Katy Bergstrom is an economist in the Poverty and Inequality Team of the Development Research Group. She is particularly interested in operational work relating to public finance issues in developing countries such as how to best target transfers, how to design efficient and equitable tax systems, as well as understanding the sources of inequality and the measurement of multidimensional poverty. Katy’s previous research has investigated how conditions on cash transfers impact targeting, and the role that preferences play in driving income inequality. Katy is excited to expand her research agenda, exploring alternative strategies to best target funds towards marginal households, measuring the costs and benefits of in-kind vs. cash transfers, as well as exploring and measuring inequality in consumption, leisure, and other dimensions.

Benoit Decerf is interested in the measurement of welfare and in the design of matching mechanisms. His recent research focuses on the construction of multi-dimensional poverty indicators that better reflect individual welfare. These indicators aim at making inter-personal comparisons that go beyond mere domination while relying only on rather mild normative assumptions. For instance, when aggregating poverty and mortality, one might assume that one year lost due to premature death is worse than one year spent in poverty, as done in this paper. When aggregating absolute and relative poverty, one might assume that being absolutely poor is worse than being only relatively poor, as done in this paper. His work aims at developing indicators that strike a balance between solid welfare foundations and understandability beyond academic circles, as attempted in this paper. Benoit wishes to provide cross-support that may help further improve the practical aspects on how the World Bank measures poverty and shared prosperity.

Daniel L. Chen is Lead Principal Investigator for DE JURE (Data and Evidence for Justice Reform) in the the Development Impact Evaluation (DIME) group  at the World Bank. DE JURE's aim is to revolutionize how legitimacy and equality in justice systems are measured, understood, and enhanced. The goal is to move from studying historical data to working with administrative data, machine learning, and RCTs to achieve a more just system. The program has thus far worked with countries in three broad categories. In the first group, DE JURE works closely with court management, judiciaries, and training academies to design, deploy, and evaluate legal interventions—often developing the technologies to do so. In the second group, DE JURE works with auxiliary actors involved in access to justice to assess the effects and ability of trustworthy Artificial Intelligence (AI) to assess trust in the law. In the third group, DE JURE obtains data and conducts historical analyses on judicial efficiency or inconsistencies that may spur a cycle of change.

Thiago Scot will join DIME as an economist. Thiago’s research is at the intersection of Development and Public Economics. He is interested in studying the design and implementation of public policies in low- and middle-income countries, with a focus on taxation and state personnel policy. In his job market paper, part of a broader collaboration with the tax authority in Honduras, Thiago studies how corporations reacted to a minimum income tax policy. He also studies how the selection, incentives and personal traits of bureaucrats influence the effectiveness of states. Thiago looks forward to collaborating on issues related to taxation, inequality, public sector personnel and justice.