Richer countries have more research published about them on average, which means that African countries tend to have fewer studies about them. But South Africa far outstrips the rest of the continent. In the sample of Das et al. (1985-2005, so a bit dated now), 46 percent of all publications from Sub-Saharan Africa were from South Africa, as you can see below. So I was thrilled to be in South Africa last week and see a vibrant research community doing research on the economics of education in South Africa, at the Quantitative Applications in Education conference at the University of Stellenbosch’s Research on Socio-Economic Policy group. Below is a rundown of just some of the interesting findings; follow the links for the full presentations.


South Africa clearly has a rich, ongoing research program regarding education. Part of the reason that’s possible is that South Africa collects data on learning at multiple stages throughout the schooling process and makes it public. The World Development Report 2018 demonstrates that many countries don’t do this, as the figure below shows. Of course, “weighing a pig doesn’t make it fatter”: Measurement by itself doesn’t solve problems. But measurement can be a first step in identifying general and specific challenges and can be one ingredient in galvanizing public support for reform. 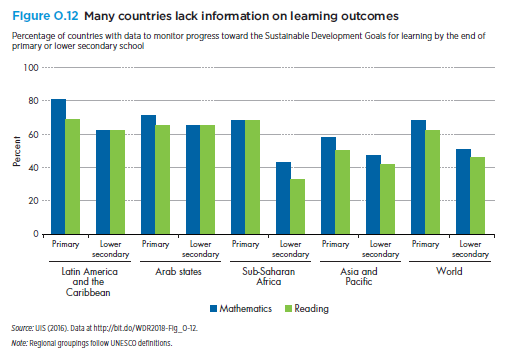