Mission or money: How can the public sector motivate employees to perform their job? Guest post by Muhammad Yasir Khan

This is the fourth in this years series of posts by PhD students on the job market.

Public service organizations in many developing countries struggle with the under-performance of frontline workers. One potential solution to the problem is to motivate workers by communicating and emphasizing the organizational mission (Besley & Ghatak 2005, Banuri & Keefer 2016, Cassar & Armouti-Hansen). However, it is unclear whether people who are already part of an organization can be motivated by emphasizing the mission.

In my job market paper, I use a randomized control trial, implemented in partnership with the Department of Health in a Pakistani district, to study the role of mission in motivating workers. Working with 710 community health workers (CHW), I show that mission motivates public sector workers to perform better on multiple metrics leading to better health outcomes. In comparison, workers getting performance-based financial incentives improve effort only on the incentivized task of home visits and achieve a smaller improvement in health outcomes compared to the mission treatment.

Each CHW is responsible for providing preventive-and-basic healthcare through home visits to a clearly defined community. This enables the randomization of individual workers, in four treatments and one control condition, with minimum risk of spillovers.

Mission treatment comprises meetings and participatory training sessions. Workers meet a facilitator to watch a video of the senior-most manager of the department describing and emphasizing the mission. This is followed by discussion and deliberation over the mission in which all workers participate. The treatment also includes a refresher of the basic skills needed by the workers. The meeting is repeated monthly for three months to ensure that workers do not see it as a one-time event.

I survey a sample of 7100 households from the communities of workers every month for four months to track their performance.

I estimate the effects of treatments on the probability of a household visit, using a linear probability model that controls for randomization block and survey month fixed effects. I cluster standard errors at the worker level.

Figure 1(a) reports the effects on home visits relative to the status-quo. Workers who receive the mission treatment improve their performance by increasing the probability of a visit by 5.7 percentage points (pp). The ex-post minimum detectable effect (MDE) size for this outcome is 3.1 pp. This improvement translates into approximately nine additional visits. For comparison, the financial incentives get workers to improve by 9.7 pp (or 15.9 additional visits).

The puzzling behavior of workers receiving both treatments is the result of multitasking.

Workers have to perform multiple tasks during and outside the home visits. I collect information on five such tasks--- including antenatal and children check, health literacy, Tuberculosis screening, and organizing immunization camps--- and combine them in a multitasking index weighting each component with inverse of variance-covariance matrix, following Anderson (2008).

Given the time constraints, workers differ in how they allocate effort to multiple tasks based on the treatment. Figure 1(b) reports the mission treated workers perform 0.17 standard deviations higher on the multitasking index compared to the control (MDE of 0.12). In contrast, financial incentives do not improve multitasking, an effect of -0.009 standard deviation.

When both treatments are combined, workers allocate effort to multiple tasks increasing performance by 0.143 standard deviations. This leaves them little room to fully exploit the opportunity to earn financial incentives, resulting in a smaller effect on home visits compared to the financial incentives alone.

Does the improved effort matter for health outcomes?

The ultimate goal of policymakers is to improve the health of mothers and children. Using a survey of households, I collect information on diarrhea prevalence and vaccination status of children in the communities served by the workers. I also collect administrative data on mother and child mortality. An index of health outcomes using the four variables, based on Anderson 2008, reveals that performance improvement also translates into better health for the population served by the workers. All three main treatment conditions improve the health outcomes, with the mission treatment and the financial incentives achieving improvements of 0.21 and 0.12 standard deviations, respectively (Figure 2, MDE=0.14), although the difference between the two arms is not statistically significant (p-value=0.127). The mission treatment reduces the prevalence of diarrhea and increases vaccination rates, while financial incentives treatment only reduces the prevalence of diarrhea and but does not improve the vaccination rate. 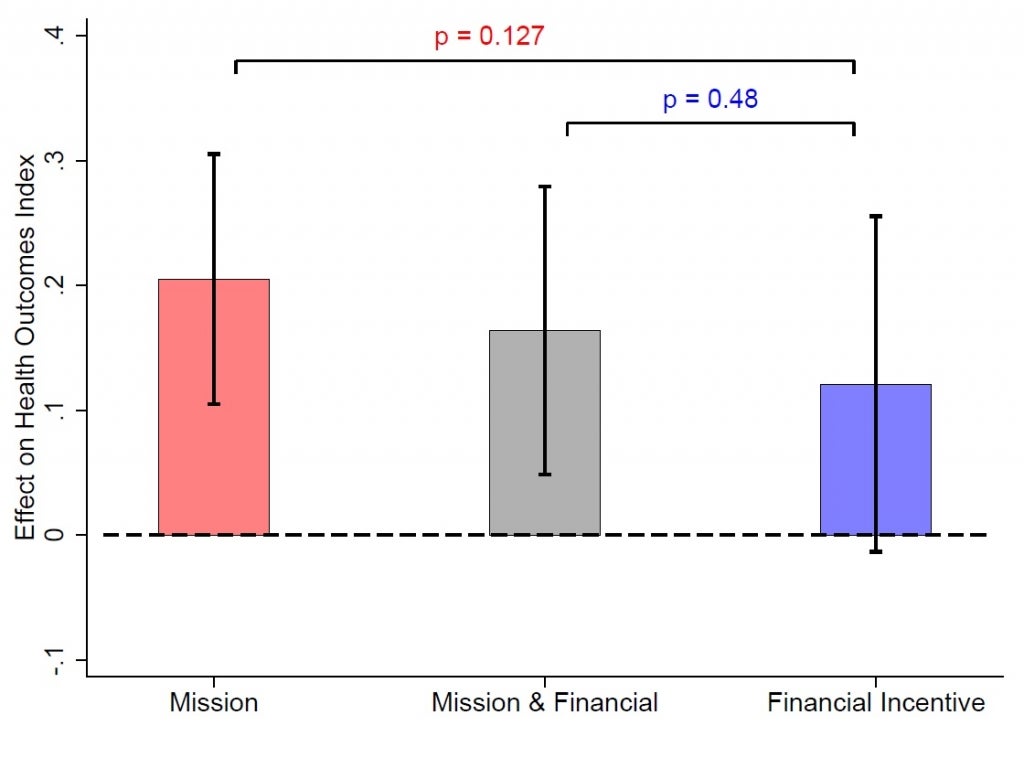 How does the mission get workers to perform better?

I find that mission intrinsically motivates workers in two ways. First, through a post-experiment survey of workers, I establish that they believe the mission and their values are better aligned, which motivates them about their job.

Second, using a modified Becker-DeGroot-Marschak mechanism I elicit their willingness to work on a task against a menu of compensation offers, including the possibility of working for free. Workers in the mission and combined treatments are more likely to accept to work for free, indicating that the treatments made them more altruistic toward their job.

These two pieces of evidence strongly support the conclusion that the mission emphasizing treatment made workers more intrinsically motivated. In the paper, I rule out alternative mechanisms such as the mission treatment making workers differentially more concerned about being monitored, and the treatment working through providing information about the tasks that need to be performed.

The effect of mission treatment is also more long-lasting. I survey households one month after the experiment to track the performance of workers. The effect of financial incentives cannot be detected one month after the incentives are withdrawn, decaying by 9.2 percentage points. However, the mission treated workers continue to perform better—the effect decays by 1.3 percentage points compared to the experimental period.

The slower rate of decay makes the mission treatment an ideal candidate for scaleup by policymakers--- workers remain motivated to perform as long as the mission does not completely fade in the background which can be achieved with more spread-out sessions or possibly more light touch reminders, something to be investigated in future research.

In summary, my paper provides evidence that public services in developing countries can be improved with a cost-effective intervention. Policymakers can use mission-emphasizing activities to keep frontline workers motivated to perform on their job, especially if the job requires multiple tasks that cannot be contracted.

Muhammad Yasir Khan is a Ph.D. student at the University of California Berkeley’s Haas School of Business.  You can follow Yasir on Twitter here.

What a useful result--bravo! Why did it matter whether workers saw the mission treatment as a one-time event?