Resilience and recovery ten years after the 2004 Indian Ocean tsunami: A summary of results from the STAR project

Ten years after the devastating 2004 Indian Ocean tsunami, Aceh provides an example of remarkable resilience and recovery that reflects the combination of individual ingenuity, family and community engagement and the impact of domestic and international aid. The tsunami devastated thousands of communities in countries bordering the Indian Ocean. Destruction was greatest in the Indonesian provinces of Aceh and North Sumatra, where an estimated 170,000 people perished and the built and natural environment was damaged along hundreds of kilometers of coastline. In response, the Indonesian government, donors, NGOs and individuals contributed roughly $7 billion in aid and the government established a high-level bureau based in Aceh to organize recovery work.

To shed light on how individuals, communities, and families were affected by and responded to the disaster in the short and medium term, we established the Study of the Tsunami Aftermath and Recovery (STAR). Beginning in 2005, STAR has followed over 30,000 people who were first enumerated in 2004 (pre-tsunami) in 487 communities (community location depicted in the figure below), as part of a population-representative household survey conducted by Statistics Indonesia. Interviews were conducted annually for 5 years after the tsunami; the ten-year follow-up is currently in the field. We ascertained survival status for 98% of the original pre-tsunami respondents and have interviewed 96% of survivors. The study is designed to provide information on the short-term costs and longer-term recovery for people in very badly damaged communities and in comparison communities where the disaster had little direct impact. 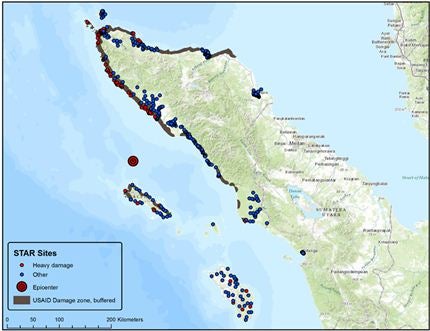 Mortality: The tsunami’s impact on mortality was immense. In some STAR communities more than 80% of people enumerated in the 2004 pre-tsunami survey were killed. Death rates in areas not directly affected by the tsunami track life tables. But, as shown in red in the figure below, in heavily damaged areas about a quarter of the population perished. Women, children and older people were more likely to die than prime-age men. Household composition played a key role in survival. Women age 15-44 and children were more likely to survive if one or more men age 15-44 were living in the household. Relationships also mattered: survival chances were most tightly linked for husbands and wives, followed by mothers and their children. The evidence indicates that when the tsunami came ashore, stronger members of the household sought to help weaker members, sometimes successfully and sometimes not (1). 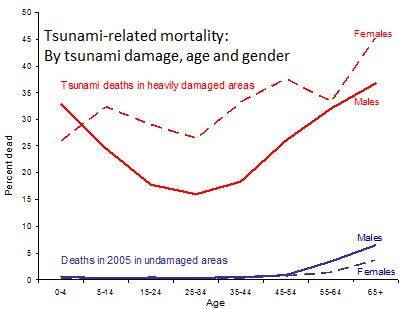 Trauma and loss of resources: Among survivors, in heavily damaged communities, about one in five was caught in or injured by the tsunami, and more than one-third witnessed family or friends struggle in the water. These experiences were rare for individuals living in communities that the tsunami did not reach, but many did lose family members who lived in coastal locations when the disaster struck. Damage to housing and land as well as roads and infrastructure was extensive in communities inundated by the tsunami. Earthquake-related damage occurred in other locations as well.

Mental Health:  Immediately after the disaster, symptoms of post-traumatic stress reactivity (PTSR) were highest among those who had been living at the time of the tsunami in heavily damaged communities, but were elevated among respondents from other communities as well. PTSR was higher among individuals who experienced traumatic events, but being from a badly damaged community also resulted in higher PTSR, net of individual experiences.  Over time, symptoms diminished, with the fastest pace of recovery among those from heavily damaged communities. By 2007, average levels of post-traumatic stress reactivity did not differ by location of residence at the time of the tsunami. While levels of PTSR immediately after the tsunami are unrelated to education, the better educated recovered faster (2),(3),(4).

Family Formation and Fertility: The tsunami took a terrible toll on young lives, killing over a third of children under age seven in heavily damaged communities. Five years after the tsunami, fertility was higher in communities that had been affected by tsunami mortality, but not in other communities. The rise in fertility reflects behaviors of two groups of women: mothers who lost one or more children had additional children earlier and women who had not yet had any children at the time of the tsunami initiated childbearing in its aftermath earlier than similar women in communities that did not have tsunami-related mortality. New families were formed through marriage and childbearing at a faster pace in communities that experienced tsunami-related mortality, relative to other communities (5).

Children’s Human Capital: STAR is designed to understand how children fared after the tsunami. A significant fraction of children lost one or both parents. Among children between 9 and 17 years of age at the time of the tsunami, we compare changes over time for children who lost a mother, a father, or both parents to changes over time for children whose parents survived. Five years after the tsunami, the deleterious impacts of losing one or both parents are substantial for older boys (who leave school and enter the work force) and older girls (who marry), whereas the effects on younger children are far more muted (6). We also consider height of children, a marker of health and nutrition predictive of later life health and prosperity. Children who were in utero at the time of the tsunami and born 3 to 6 months afterward are shorter, for their age, at eighteen months than earlier cohorts. This height deficit likely reflects the combined effects of maternal stress during pregnancy and reduced resources. However, three years later, these children have caught up to or surpassed height-for-age of their older counterparts suggesting that the post-tsunami reconstruction will have long-term impacts on health and well-being. The results are also important because they suggest recovery of height deficits in early childhood is possible.

Housing and Migration:  In the four months following the tsunami, nearly two-thirds of individuals from severely damaged communities changed residences—a rate 10 times higher than among individuals living elsewhere. Individuals whose homes were damaged were far more likely to move (7). Consistent with these results, the fraction of individuals who report living in a home owned by a family member falls dramatically between 2004 and 2005 for individuals living in heavily damaged areas at the time of the tsunami, but not at all for those living elsewhere. Remarkably, by 2010, individuals are back in family-owned homes, at the same rate observed before the tsunami.

Summary
The tsunami’s toll on Aceh was enormous. Kinship networks were torn apart, survivors lost homes and business assets, saltwater and silt inundation changed landscapes and soil composition, and physical infrastructure was destroyed.  In the decade since, efforts to rebuild Aceh have absorbed the money and time of individuals from throughout the province, as well as from elsewhere in Indonesia and throughout the world. The results of these efforts are remarkable. Within five years, individuals were back in homes they owned, often on their original land, in communities with new schools and in many cases improved infrastructure.  Ten years later, these communities have new residents as well as old, as a result of births and of in-migration.

The overall impression is of a province and a population that have recovered from a disaster of immense proportions. Data collected by STAR provides scientific evidence that this impression is correct although some population groups have not recovered. Evidence-based measures of the success of efforts to rebuild Aceh speak to the benefits of long-term, well-organized, and well-financed recovery efforts in the aftermath of a disaster--- something that is all too easy to forget once the initial humanitarian crisis has been assuaged.