This is the eighth in our series of posts by PhD students on the job market this year.

The process of structural transformation - moving workers from low (agricultural) to high (non-agricultural) labor productivity sectors - is critical for economic growth. However, we know much less about the environmental impact of such sectoral reallocation of labor. In particular, labor exits from agriculture can have adverse environmental consequences if farmers respond to tighter labor supply and switch to labor-saving technologies with a potentially larger carbon footprint.

In my job market paper with co-authors Teevrat Garg and Maulik Jagnani, we focus on one specific environmental consequence of structural transformation: the increased use of fire as a labor-saving but polluting technology by farmers in India. Farmers use fire as a low-cost means of clearing crop-residue left after harvest, ease harvesting of sugarcane, and clear undergrowth on fallow lands in shifting agriculture. These agricultural fires are a growing environmental and public health concern in India, contributing to as much as half of the particulate pollution in many parts of the country during the winter months. We present the first evidence that agricultural labor exits compel farmers to use a labor-saving but polluting technology -- fire -- resulting in increased particulate matter.

We combine administrative information on the rural road construction under the PMGSY with satellite-based agricultural fires and pollution measures at the village level. Starting from the early 2000s, the PMGSY aimed to provide all-weather road connectivity to previously unconnected villages. The program prioritized villages with a population above 1000, followed by villages over 500, and then villages under 500. To estimate rural roads' effect on agricultural fires and PM2.5, we employ a fuzzy regression discontinuity design (due to imperfect compliance of the PMGSY with the population threshold rules).  Our first stage results show that, during 2008 -13, villages above the PMGSY population threshold see a 23-percentage point increase in the likelihood of receiving a road (Figure 1). 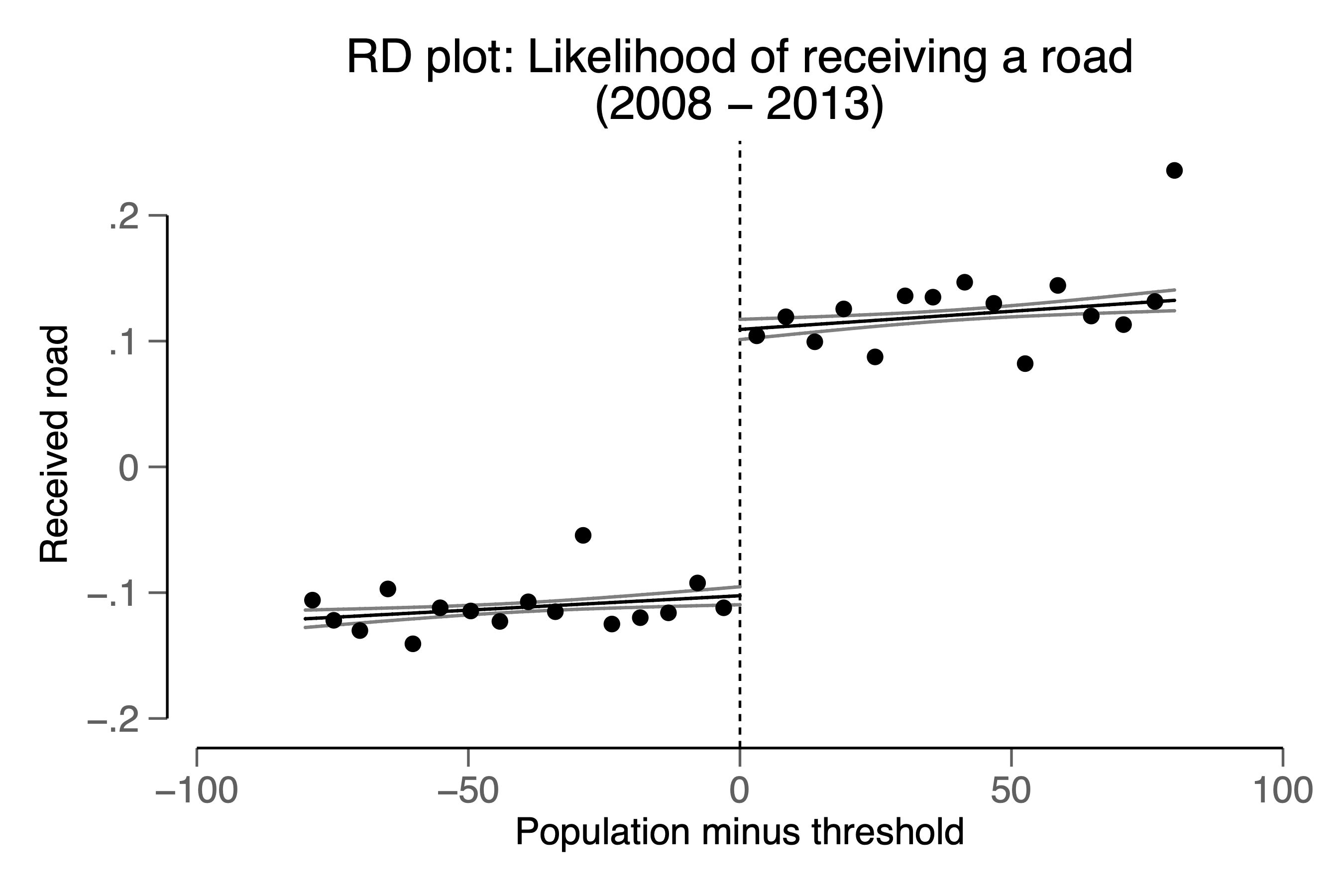 Impact on fires and air pollution

We measure annual fire activity using daily data from NASA satellites based on the detections of infrared radiation associated with biomass fires within a 10-kilometer radius around sample villages. Villages above the treatment threshold experience a sharp jump in the number of fires relative to villages below the population cut-off for road assignment (Figure 2). Our IV estimates, instrumenting access to rural roads with the PMGSY population threshold, suggest a local average treatment effect (LATE) of 2.6 additional fires per year (a 70% increase relative to the control group mean). This increase in agricultural fires also results in a corresponding decline in air quality. Using satellite and atmospheric model-based estimates of the annual average PM2.5, we observe a large and statistically significant increase in PM2.5 for villages at the population treatment threshold (Figure 2). The corresponding IV estimates show an increase of 1.3% (0.5 ) in PM 2.5. This impact on pollution is quiet substantial: based on existing dose-response estimates in the literature, a 0.5  increase in PM 2.5 implies an increase in daily all-cause mortality by 0.03%.

Is the increase in PM 2.5 driven by mechanisms other than agricultural fires? Rural roads can increase transportation, and the resulting vehicular emissions could plausibly lead to worsening air quality.  We test for this possibility by examining the seasonal effect of roads on fires and pollution emissions. Our results show that the increase in fires and emissions is concentrated in the winter harvest and post-harvest months (October - March) and muted during the rest of the year. The winter months correspond to the period where farmers benefit from the use of fires in the face of agricultural labor exits - either to clear harvest (rice) residue off fields within a narrow time window before planting in the next season or to make (sugarcane) harvesting less labor-intensive.  Moreover, we show that the increase in particulate matter is driven by emissions from biomass burning, with null effects on emissions from all other anthropogenic sources. Together, these results strongly suggest the overall impact on pollution is likely to be driven by agricultural fires rather than other channels such as vehicular emissions.

Our work builds on important literature examining trade-offs and synergies between economic development and environmental quality. In particular, our findings complement recent work suggesting that increases in rural wages due to India's large public works program prompted farmers to switch to mechanized harvesting technologies that leave more crop residue, thereby increasing agricultural fires.  We fail to find evidence that rural roads increase the local stock of or household use of hired mechanized agricultural equipment such as tractors, combine harvesters, or threshers. Instead, our results suggest rural roads induced movement of workers out of agriculture and increased use of crop fires – a labor-saving technology.

The persistence of a labor productivity gap across agriculture and non-agricultural sectors has generated considerable interest amongst governments and international agencies to devise policies that reduce frictions in labor reallocation across sectors. Our research underscores the need to complement these policies with strategies to mitigate their potential adverse environmental externalities. In our context, future research could investigate the design and implementation of monetary and non-monetary incentives to alter farmers' decisions to engage in using fire in agriculture in the face of soaring labor costs.

Hemant Pullabhotla is a postdoctoral fellow at Stanford University. More details on his research can be found on his webpage.