What is Spatial Regression Discontinuity?
For reasons frequently discussed on this blog, simply comparing outcomes before and after the construction of infrastructure (which could be correlated with pre-existing trends), or comparing outcomes in communities receiving the new infrastructure to those not (which could be correlated with productivity, or other targeting criteria) is not going to convincingly capture the causal impact of these investments. Further complicating this, the infrastructure development is often coupled with other government interventions to protect and enhance the returns to these investments.
An alternative is to use a spatial discontinuity in the coverage of an infrastructure, or a sharp change in access to a policy across a border. In an application we discuss at the end of the post, hillside irrigation schemes in Rwanda are gravity-fed, meaning canals carry water through these schemes. For two reasons, this allows us to identify the causal impact of irrigation access. First, this creates a discontinuity in access to irrigation: plots just below the canal receive access to irrigation, while plots just above the canal do not. Second, this requires the canals follow a constant gradient (not too steep, not too shallow); within the irrigation site, relative elevation can’t be manipulated, so we can consider whether plots lie just above the canal or just below the canal “as good as random”. 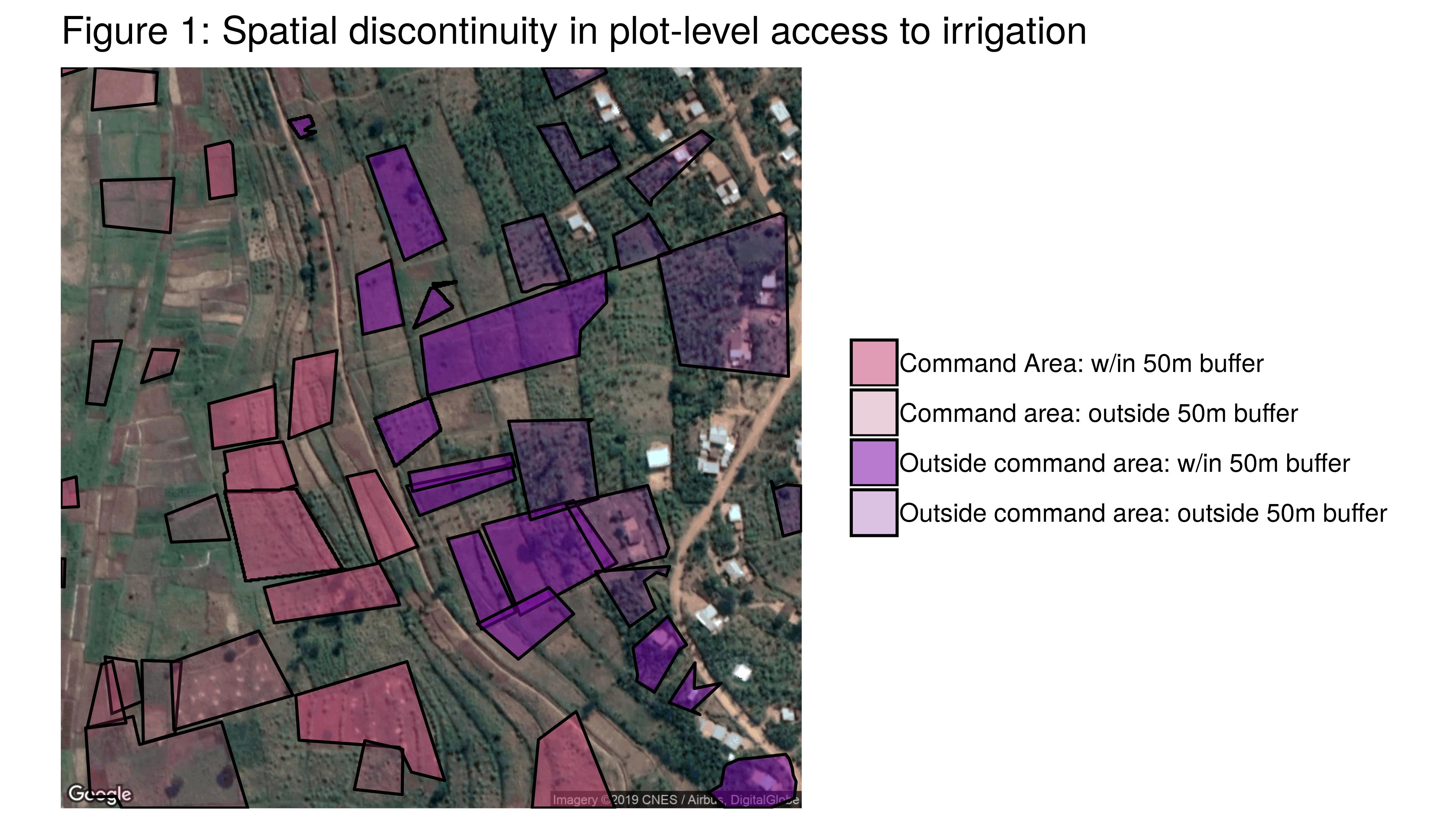 The essence of this research design is captured in the image above. The canal cuts through the hillside, dividing plots into two sets: the pink and the purple. The pink plots are below the canal, and they receive access to irrigation from the system. The purple plots are above the canal, and they do not receive any access. In practice, we focus our analysis on plots just above and just below (within 50m of) the boundary created by the canal: these plots are shaded darker pink and darker purple in the figure. The close proximity of these plots, but difference in access to irrigation, allows us to assume that any differences in agricultural outcomes and investment on these plots are caused by access to irrigation.

How does SRD compare to RDD?
So yes, this is similar to a regression discontinuity design (RDD; see a great curated list of posts on the technical details on this, and other research designs, here). When using a RDD, researchers seek to estimate the effects of a policy with a sharp eligibility threshold by comparing individuals who are just barely eligible for a policy to individuals who are just barely ineligible. Although RDD and spatial regression discontinuity (SRD) are similar in spirit, here are a number of crucial differences in implementing SRD vs. standard RDD (these differences are reviewed at length by Keele and Titiunik and Cattaneo et al., and our discussion follows theirs closely):


Implementation of Spatial RD
So now that we have highlighted the key differences between SRD and RDD (cutoffs are multidimensional, spatial units are frequently discrete), what tools can we use to measure causal impacts through a SRD approach, and how do they actually work? 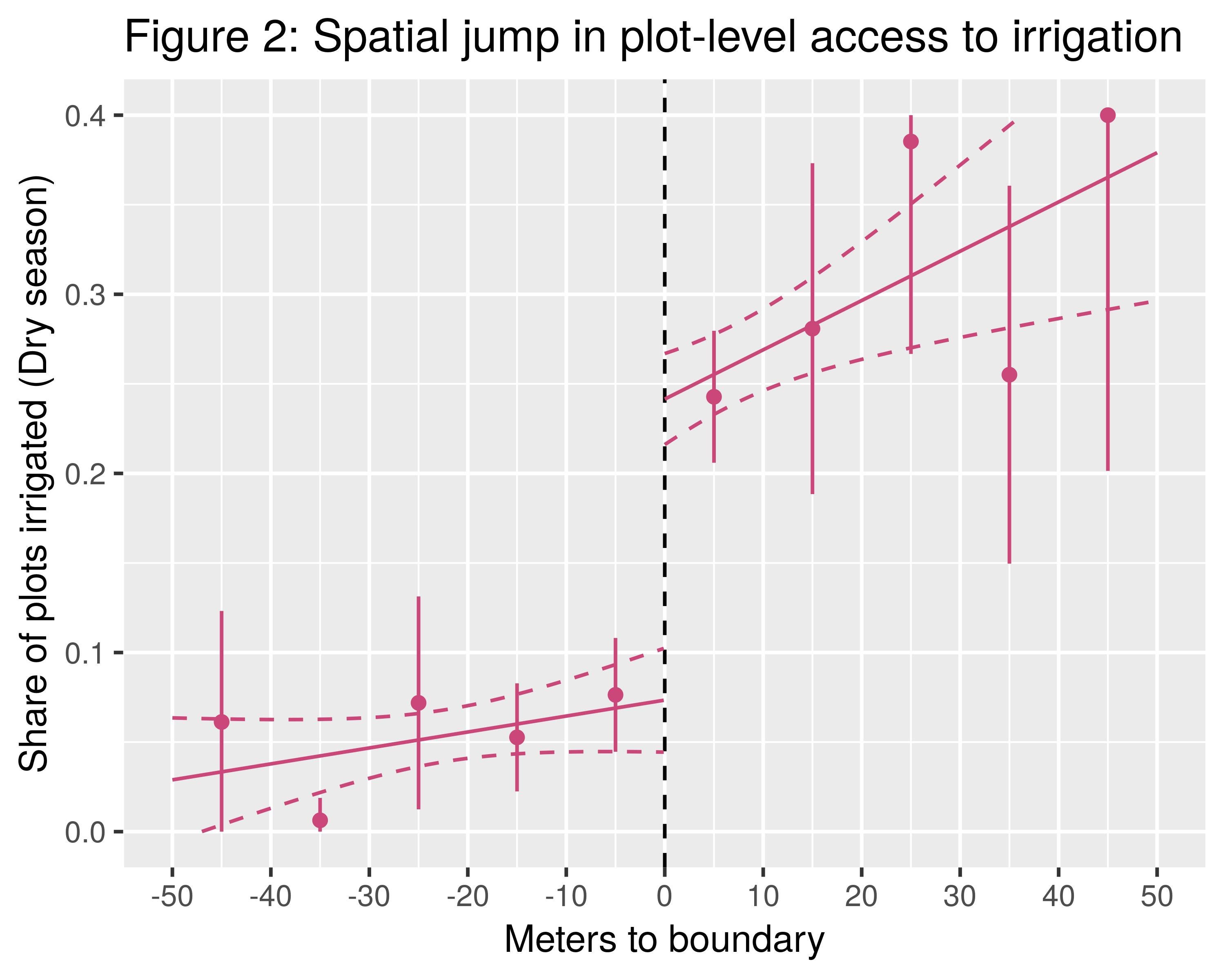 An application of SRD in Rwanda
As mentioned, we use spatial jumps to evaluate recently constructed hillside irrigation schemes in rural Rwanda (with co-authors Maria Jones and Jeremy Magruder).
These irrigation investments are considered an important component of closing agricultural productivity gaps between sub-Saharan Africa and the rest of the world — particularly so since, as of 2015, only 3.3% of arable land in Africa was irrigated, compared to 50.5% and 63.2% in South and East Asia, respectively. It is important for policy is to figure out whether this productivity gap exists because of fundamentally lower returns to irrigation, or whether there are constraints that affect farmers’ decisions to adopt irrigation.
In our paper, we implement both (for robustness) RD and Spatial Fixed Effects approaches. We test the validity of each approach by showing key plot and cultivator characteristics that should not be affected by access to irrigation are balanced across the boundary. For inference, we cluster our standard errors by water user group (the set of plots that use the same pipe for access to water, and their neighbors above the canal).
The figure above shows the implementation of RD: we see that during the dry season, 7% of plots just above the canal are irrigated, while 24% of plots just below the canal are irrigated. That adoption of irrigation jumps 17pp at the boundary is what allows us to estimate the impacts of irrigation. At the same time, the small share of plots with access to irrigation that make use of the irrigation infrastructure is a puzzle, and we spend much of the paper investigating potential constraints to adoption. Very interesting post !
I would really highlight "manipulation" as the main limit of spatial RD as this would typically ruins the basis for identification in "standard" RDD. As for other well-known, constant and forseable types of "discontinuities" (such as the age of majority for example) people are well aware of their existence and act accordingly. Farmers typically know about which plot is well irrigated or not for example and act or sort accordingly around the threshold(s).
This being said, as you mentioned in the post, there are a number of robustness tests that can be performed and complementary approaches that allow to check the consistency of estimates. And it might well be totally valid in your article.
Thanks for the post
Adrien

Thanks! Berk discusses this in a past post on this blog on RDD more generally (including on manipulation) here. As that post points out, common solutions include density checks and to have a baseline before the policy is implemented in order to test for balance before selection can plausibly occur (particularly for balance on variables indicative of manipulation, e.g. transaction history in agriculture).

However, key to evaluating the impacts of such infrastructure developments on geography rather than individuals (plot vs household outcomes) is documenting the selection of individuals across plot types. This is likely an important mechanism through which the policy has impacts, as clearly land itself is not moving!
Florence & John

Very clear and useful post for people (like me) using (or who want to use) RDD in a geographical context. I'm trying to estimate the effect of forest taxation on deforestation in Central Africa, so I was wondering if you have papers in mind that use the same procedure as describe here (if it as accompanied by code examples, that would be phenomenal :D).
Thanks in advance !