Thank you for your patronage? Discretionary appointments and the performance of bureaucrats: Guest post by Guo Xu

This is the sixth in our series of posts by Ph.D. students on the job market this year
A growing concern among policy makers is that patronage – the discretionary appointment to public office – undermines government effectiveness.  Patronage appointments, however, remain ubiquitous across the world (Grindle 2012): from chiefdoms, royal courts to modern-day presidents, discretionary appointments remain pervasive both in developing and developed countries today.

Despite the ubiquity of patronage as an allocation mechanism, we have little empirical evidence on how this practice affects public sector performance.  In theory, the impact of patronage is ambiguous (Aghion and Tirole 1997, Prendergast and Topel 1996): on the one hand, patronage may mitigate moral hazard through better information and the appointment of loyal subordinates. On the other hand, the discretionary power can also be abused by biasing the allocation of positions in favor of socially connected subordinates. Understanding how patronage affects performance, however, is critical as bureaucrats –responsible for raising revenue, providing public services and implementing reforms – make up a key element of state capacity.

In my job market paper “The Costs of Patronage: Evidence from the British Empire”, I study patronage through the lens of a historical bureaucracy that spanned the globe: the Colonial Office. The Colonial Office was a ministry in charge of administering the British Empire through its colonial governors. Governors were senior bureaucrats that headed up colonies.  At its peak, governors were responsible for administering a territory that covered a fifth of the earth’s land mass.

A major barrier to studying bureaucracies is the lack of data available to researchers. To overcome this, I undertook a large-scale digitization of historical administrative reports to combine colonial and public finance data. Over the course of three years I digitized over 3,000 administrative reports, photographing more than 135,000 pages of historical documents from the National Archives. This is the first time colonial personnel and public finance data have been combined into a single dataset covering the entire period of the British Colonial Office 1854-1966, the universe of all colonial governors and the 70 colonial territories under the control of the ministry.

To measure social connections, I collected data on family trees and biographies. This allows me to measure connections by shared ancestry and membership in the British aristocracy, attendance of same elite school and university. To measure performance, I exploit the fact that revenue generation was a key performance dimension of the Colonial Office.  Similar to the study of CEOs and leaders (Bertrand and Schoar 2003, Jones and Olken 2008), the seniority of governors allows me to map colony-level performance to individual  governors. This allows me to relate aggregate fiscal performance to individual connectedness, again before and after removal of patronage.

My findings are fourfold:

First, I find that governors when connected receive higher salaries during the period of patronage.  As wages are fixed across positions, this increase is driven by the allocation to higher salaried colonies. These colonies are more desirable positions that are larger, lie closer to London and enjoy lower settler mortality rates. Importantly, the salary gap vanishes after the removal of patronage (see Figure). 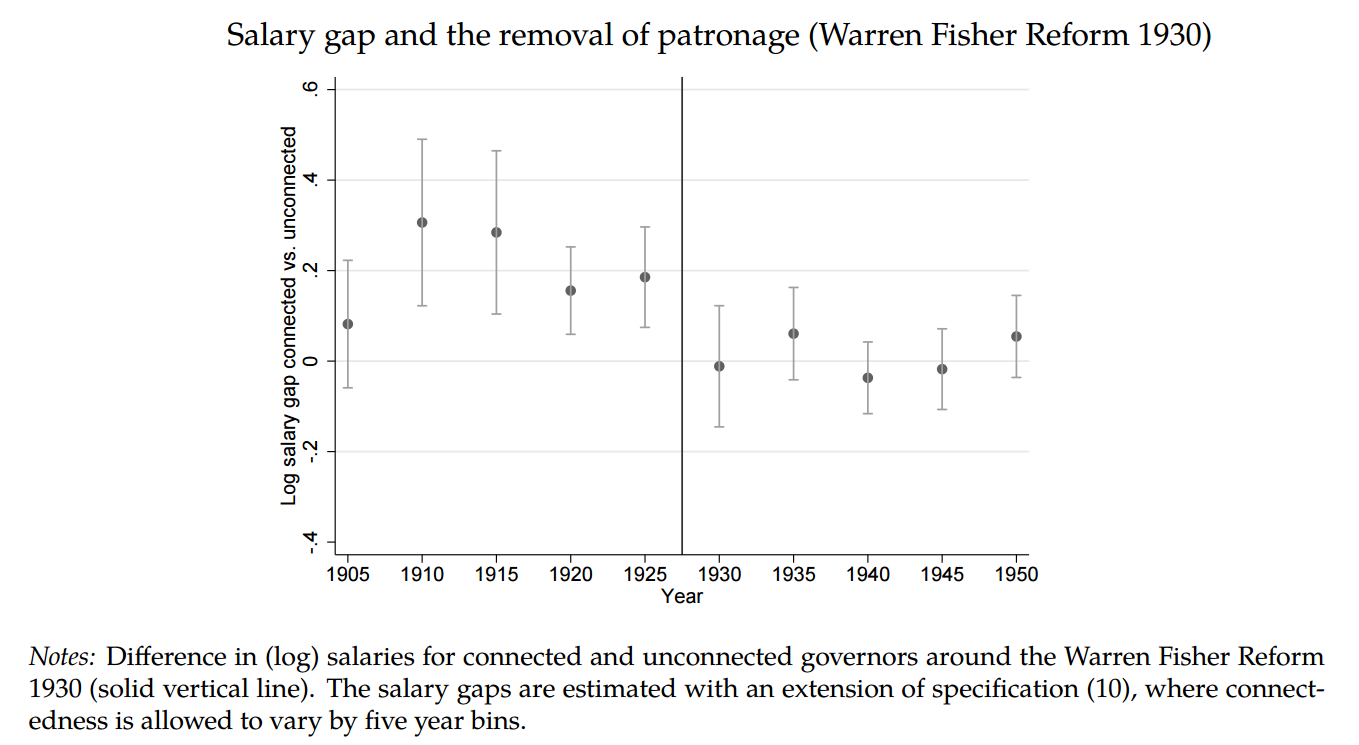 Second, I find that connected governors, once allocated to serve their six year terms, perform worse in their job. Governors during years connected to their superior generate less revenue, invest less in public goods, provide more tax exemptions (which primarily benefit the settler elite) and experience more social unrest in their colonies. Again, these negative performance differences disappear after the removal of patronage.

Third, patronage induces misallocation. Using a bureaucratic rule to predict the appointment of governors unrelated to fixed colony-level characteristics, I find that revenue and investments grow less under governors that were appointed connected.  The removal of patronage mitigates this negative gap and the allocation of governors to colonies becomes assortative, indicating an improved match quality.

Finally,  I find that modern day countries exposed longer to connected governors during the period of patronage exhibit lower fiscal capacity today. Consistent with policy persistence and the tax exemptions granted in the colonial period, these countries have lower quality tax systems today. As before, the exposure to connected governors after the removal of patronage has no long-run impact.

Taken together, my results provide evidence that there are large costs of patronage, both for the British Empire but also for the independent countries that emerged from the Empire following decolonization. While providing evidence from a historical ministry, the key lesson for modern day bureaucracies is that incremental reforms aimed at curtailing discretion in the appointment of bureaucrats  may improve government effectiveness and economic performance. This is particularly so for the case of senior bureaucrats who have purchase over decisions with potentially aggregate consequences. Incidentally, it is exactly these senior positions that still remain under patronage today.

Guo Xu is a PhD student at the London School of Economics.
Topics
Governance
Jobs & Development