Was de Soto wrong? Impacts of a formalization experiment in Sri Lanka

“There is nothing in this book that needs to be confirmed by complex laboratory experiments. You have only to open the window or step into the street”, Hernando de Soto, The Other Path, p14., 1989.

Hernando de Soto famously argued that informality is costly for firms, and that informal firms would desperately like to formalize, but are hampered in doing so by the maze of red tape and complicated regulations they must go through in order to be formal.  The result has been the influential Doing Business agenda, which has made it easier for firms to start businesses around the world. Certainly such efforts have been welcome to many people seeking to start a business, with data from both macro and micro studies suggested more formal firms are created when entry is easier. But is this enough to get most informal firms to formalize?

I have a new paper with Suresh de Mel and Chris Woodruff which tries to experimentally measure the demand for formalization among informal firms in Sri Lanka, and then measure the consequences of formalizing on these firms. We took a sample of 520 informal firms around Kandy and Colombo, and randomly allocated them to the following groups:

·         Information and free cost group: provided information about how to register, along with reimbursement for the small cost of registering

A new 2-page Finance & PSD Impact note summarizes the results here, along with some discussion of policy implications. I’ll highlight some key results, and then focus on a couple of issues for impact evaluation.

·         Three rounds of follow-up surveys at 15, 22 and 31 months after the start of the intervention were taken in order to measure what impact, if any, formalizing was having on the firms. We find increases in mean profits, which appears to come from the upper tail, with most firms not experiencing a profits increase; we find little evidence for most of the channels through which proponents of formalization claim it benefits firms – firms were no more likely to obtain credit, participate in government programs, or get government contracts. However, we do find formalizing led to firms doing more advertising, keeping receipt books, and having more trust in local government.

One obvious thing about informal firms is that you won’t find them on any standard firm list, making coming up with a sample frame challenging. Our solution was to draw geographic blocks, and then do full listings within these blocks to come up with a sample. One concern you might have is whether firms are willing or not to admit they are informal. We actually experienced the opposite problem, with some firms saying they were informal at baseline, only for us to discover later that they were really formal, or at least quasi-formal (with the registration in perhaps their father’s name, or for a different location, etc.).   In a follow-up survey we gave firms small incentives to prove their formality status, by e.g. paying them for showing us their business registration certificate – something it would have been good to have thought of at baseline.

Here is a plot of the CDFs of final round profits for the treatment and control groups. You see that the distributions look very similar to one another write up to about the 90th or 95th percentile, and then there are a few treatment firms that had much higher final round profits than the control firms. This is what leads to a significant treatment effect on mean profits, but as soon as we truncate profits this impact falls and becomes insignificant. 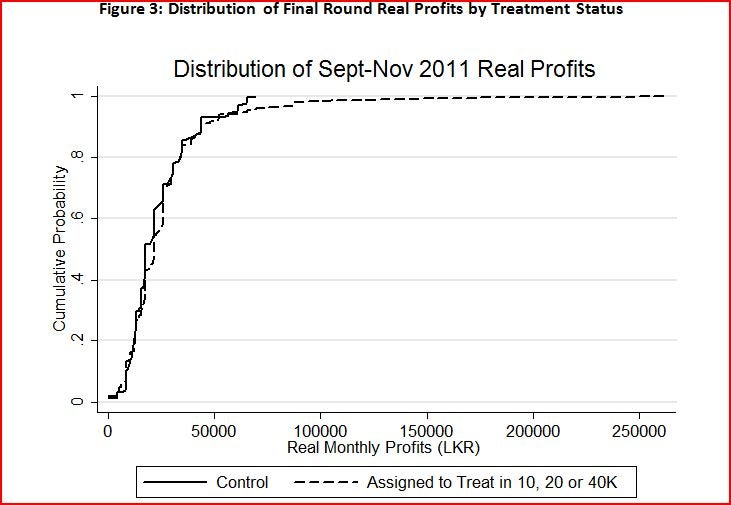 The obvious question is then whether these few firms driving the results represent genuine change, or just measurement error. To address this issue we went to each firm with large changes in profits and conducted case studies to see whether this change seemed genuine. Although small in number, these more detailed case studies provide support for the idea that a few firms had benefited substantially from formalizing. For example, two of the firms were in the vehicle repair business—one automobiles and one autorickshaws. Both said that an important consequence of registration was the ability to become an official parts distributor for an auto parts manufacturer. Previously, they had purchased parts from another dealer, i.e., at higher than the wholesale price. Both had also undertaken expansions of the physical facilities, with one adding an auto lift and a customer waiting room, while increasing employment from 2 to 8 workers. A saw mill which registered said the key was to be able to put the forest service stamp on the receipts which he issued. The stamp allows customers to transport the wood across municipal boundaries without obtaining further permissions. His estimate was that he had previously lost 25 percent of sales to other mills which could provide this stamp. Finally, a grocery store and tea (snack) shop had used the license to obtain a loan to purchase a delivery truck. The truck was used in the business, but also leased out. On his own, he had gone to the health department to request a health inspection for his tea shop. He was intent on improving his score so that he would obtain a health sticker he could display, and so that he could open a bakery and wholesale bread.

These types of cases of rapid firm growth are rare – and perhaps put us in the world of studies of rare diseases where initial studies identify some effect, and then follow-up trials try and explore this effect more by either having massive samples, or screening to get a sample of at-risk individuals. The problem with doing this with firms is that it is much harder to identify ex ante which firms are at-risk of potential fast growth – something several ongoing studies are looking at.

One response we have received to the paper is that it is disappointing it finds only limited effects on economic outcomes or mediating channels – and that the paper would perhaps have better publication prospects if we found large effects. However, as the CDF above shows, on profits we not only find not much effect for the average firm, but we have pretty good data to show this; while for mediating channels many of the zero effects we find are quite precise zeros. This then raises the issue of publication bias. We think in our case the fact that there don’t seem to be large positive effects of formalizing on most firms that formalize is an interesting result.

Disclaimer: I have not read your entire post in details - I am only sharing some general thoughts on de Soto's book.

What I learned from 'the Other Path' the first time I read it, was not that all informal business would prosper or have a future in a system without red-tape, but rather that the red-tape and corruption were in place to serve insiders in the system, and prevent outsiders from entering the system and gain economic or political influence.

Of course, the outsiders, as a response, would organize in various ways to increase their bargaining power and increase their economic prospects. Bureaucrats, would take bribes to benefit from the bureaucratic power they were granted. As a result, you would have a formal economy and a semi-formal economy. And the skill-set that would determine the failure or success of a businessman could be expected to be quite different between these two spheres. Hence, removing the red-tape may not benefit small business in the semi-formal economy, even if it would benefit the future prospects of small businesses in general.

Furthermore, the red-tape system described by de Soto would lead to the failure of most people to meet their aspirations, it would lead to a failure in securing property rights, and in a general failure to enforce rule of law and proper contracting between businesses. In other words; creating waste and discontent. And in the end; creating terrorism.

Thanks for posting this summary, and I look forward to reviewing the 2 page summary/paper! As a disciple of de Soto's theories in grad school, I found your research worthwhile and of personal interest. Perhaps you can consider this one episode of your economic theory "Myth Busters" series!

- I found it interesting that "rewarding" the subjects for showing you proof of formality made such a difference! Interesting example of incentives!

- the highlighted case study illustrated the benefit of formality that especially comes from becoming an "official partner" of a major firm (domestic, regional, or multinational). We have seen similar impacts in the agri sector -- both as official suppliers and and official distributors/retailers, or service providers like the dealer.

The findings are interesting but they don't mean that being formal is not better than being informal. Your results mean that in the short time following registration you considered, registered businesses did not benefit from their action but it is still possible that in the long-run (5 year or more) these firms will be able to benefit through the same channels we suspect.

It is certainly possible that there may be benefits in the longer-term, which is why we have followed these enterprises multiple times since registration. When owners of small firms are considering whether or not to take the time and money to register today, they have to be very patient or forward-looking if this will only benefit them in 5 years time - so even if such effects may be present, they may come too late to make firms want to formalize.

Very interesting article and, as Duncan Green on his Oxfam blog says, clearly another big nail in the coffin of De Soto’s ‘big idea’ about property rights. However, I’m surprised you said very little about the issue of growth or turnover in individual microenterprises since, in my experience at least, this is the major real life factor that determines formality.

Most informal microenterprises fervently hope to reach a level of turnover that would justify them formalising. However, the exact opposite dynamic is at work in most poor communities, surely including in Sri Lanka. This is that more and more informal microenterprises are being established as part of a desperate ‘poverty-push’ process, often aided by various poverty reduction and job creation schemes funded by the international donors. This ultimately succeeds only in dividing up local markets for the simple products and services produced by informal microenterprises between a larger number of informal competitors, and so makes it much more unlikely that any incumbent firm would seek to formalise because their turnover/profits are likely to be reduced. If things are tight you don’t need the additional costs of formality, while the benefits are often few and far between. The policy recommendation here would be to somehow temper (say, through CCT programs) the massive inflow of new informal microenterprises into the local economy, thus allowing at least incumbents to grow to the point where they might consider formalising (and also adopting some technologies and so on, but that’s another argument). Not sure thats what the international donors want to hear though.

De Soto was silly to argue in favour of very much more microenterprise development in his first book, but then to push the idea that formalising was so good, as in his second book, since the two trends he effectively built his 'troubleshooting' career upon are pretty much incompatible. Also, did you not think to try the opposite to your experiment - paying formal firms to deregister? This might have succeeded in creating a new raft of informal microenterprises. So what would have been the conclusion then?