What happens when you give $50,000 to an aspiring Nigerian entrepreneur?

Most firms in developing countries have no paid workers, and hardly any reach the size of 10 workers or more. For example, Hsieh and Olken (2014, p.93) report that in India and Indonesia “the fraction of firms with less than 10 workers is almost visually indistinguishable from 100 percent”, and in Nigeria, survey data indicate that 99.6 percent of firms have fewer than 10 workers. Are there constrained entrepreneurs in developing countries with the ability to grow a firm beyond this 10-worker threshold? If so, this raises the questions of whether such individuals can be identified in advance, and of whether public policy can help them overcome these constraints to firm growth?
I address these questions in a new working paper that evaluates a nationwide business plan competition called YouWiN! in Nigeria.

The Business Plan Competition
The YouWiN! competition was launched in late 2011 by the President of Nigeria, and in its first year attracted almost 24,000 applications aiming to start a new business or expand an existing one. The top 6,000 applications were selected for a 4-day business plan training course, and then 1,200 winners were chosen to receive awards averaging US$50,000 each. 729 of the 1,200 winners were randomly selected from a group of 1,841 semi-finalists, providing experimental variation from US$36 million in grants that enables causal estimation of the program’s impact. Three annual follow-up surveys enable tracking the trajectory of impacts.

What do these awards do?
If applicants are not credit-constrained, then receiving a cash grant should not change the optimal investment decisions of their businesses, and we should not expect to see any change in business outcomes as a result of the grant (the paper discusses this more formally). But in fact the grants result in large impacts in business performance: 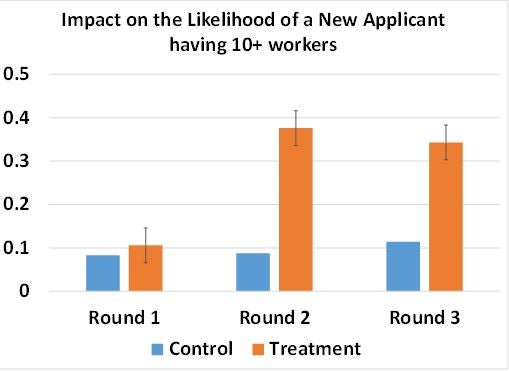 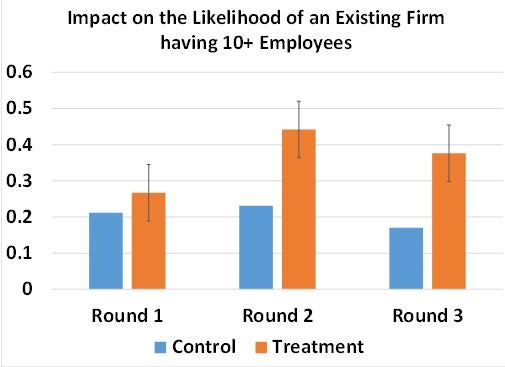 Broader points of interest from an Impact Evaluation/Measurement Perspective
Those are the headline results. I thought I’d note a few points that may be of broader interest to our readers – for readers more interested in the policy implications or more details on the results, see the paper or a 2-page impact note.
Topics
Jobs & Development
Competitiveness
Countries
Nigeria

Despite the fact on this issue it seem critical for some one to make a great emphasis which is not so, i believe they are going to come up with good frame work that will yield profit and create employment opportunities without sentiment

Fascinating study, and agree with Tim's comment above. That finding could have important implications for the way entrepreneurship programs are currently run, with a strong emphasis on selection.

This sentence from the paper, "Nevertheless, conditional on getting to the stage of submitting a full business plan, we find that personal, business, and business plan characteristics have low predictive power for identifying which entrepreneurs will grow faster, and which will respond best to treatment." deserves it's very own blog post. Maybe it's very own paper.

Thanks, it is an important issue that I hope to delve into more deeply going forward.

Profound write-up.However, i am also wondering if adequate training is given to aspiring entrepreneurs before submitting the business plan(how to go about it).A badly presented plan is detrimental.Although 'illiteracy' is commonly associated with low income segments of the population,it is also possible that some other segments might experience challenges when it comes to writing a business plan.I think, training should be offered to interested candidates before inviting submission of business plans.Cheers.

I find the study interesting as an entrepreneur resident in the UK/US and from a developing country. The selection process next time should filter all forms of favoritism. Genuine Idea banks should be created from the pool of problems besetting Nigeria and Africa. This can be achieved by the entrepreneurs through Televised business competitions and consultants hired by the world bank and the government. With this foundation laid, appropriate training should be given to the selected few, on how to effectively write a business plan and implement it. I am hopeful with the proper foundation, genuine and profitable businesses will evolve and employee figures will rise to 10 and above.

If I understand correctly, every entrepreneur that received a grant also completed the 4-day business plan training. Do you know how important this training is to the end results? Would we have seen similar results if the grant recipients did not receive the training? I ask, because other research shows that when this type of training is coupled with grants...there is significantly better results than if the grants (or) training are applied independently.
"men with access to loans-with-training report 54% greater profits. This
effect increases slightly over time and is driven by men with higher baseline profits and higherability. Men have an initial impact from the loans without training, but this effect is gone by nine months..."
http://www.ilo.org/wcmsp5/groups/public/---ed_emp/---emp_ent/---ifp_see…

Its of great importance to see the world bank being proactive too
What is wrong with a world bank developing huge database of samples of businesses and business plans that can be tweaked by prospective entrepreneurs for use in their various countries?
Knowledge-based empowerment matters and is key to greater success in a systemic integration of all to the empowerment train
So if this is done , then it is possible to have a large number of would-be entrepreneurs who are knowledgeable in what they want to venture into
This is my take