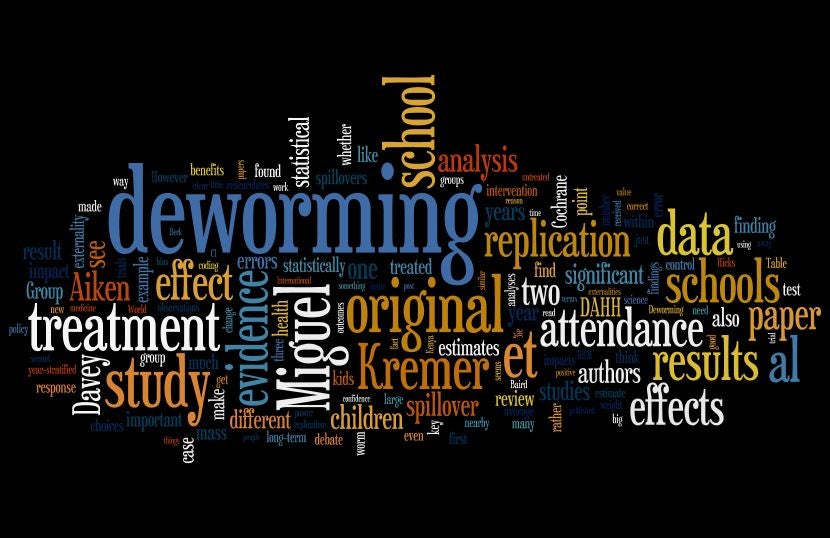 Over the last several weeks, tens of thousands of words have been published about a study on the benefits of deworming for Kenyan schoolchildren, about the benefits of deworming more generally, about replication in science and social science, and about the evidence base for development programs. More will surely be written. As you’ll see below, several blog posts seek to make sense of the hubbub.

For those engaged or interested in the debate, I provide links to the primary research documents as well as many of the responses.

The key research documents for the current round of the Worm Wars (there were earlier versions of the replication and responses to those, which I list below) The media articles that prompted a host of current responses Responses, interpretation, and making sense of the responses and interpretation (and it’s worth scanning the comments below the posts; much of discussion is there)
Key research documents for the last round of the Worm Wars (i.e., when the draft replications emerged, in 2014) The Data (in case you would like to replicate some or all of these papers yourself) More research papers (mentioned in some of the above) And for the deep dive, there’s always the Twitter firestorm.

Let me know what I’m missing; I am updating this post.


Note: The image at the top of this blog post was created by me using Wordle.net, using the content of many of the articles linked to above.
Topics
Education
Health
Countries
Kenya

Good suggestion; I have added the video link.

Thank you! I spent all day going through the links... also, it was very useful to get my hands on the STATA dataset.

Hi, David! Happy to read your article here.
All the best to you.
Figueiró.

The replication team has posted their data/code: http://datacompass.lshtm.ac.uk/32/

Thanks!  I added the data links for both the original paper and the replication papers on Friday. It's great that they are both available.

Hi there - I notice that you're missing the replication authors' response to HHKM's response: 'Authors’ Response to: Deworming externalities and school impacts in Kenya' http://ije.oxfordjournals.org/content/early/2015/07/25/ije.dyv130.full?…
Quite an important addition, I think.

Agreed and added. Thank you!

Thanks for this comprehensive review. If after going through all this material someone still wanted more Worm War I recommend going back to one of the most entertaining videogames ever published (back in 1995...) http://www.gog.com/game/worms_united
The title of this post would be perfect for a new release:)

The dataset and code for the Worms (2004) are available for download
doi:10.7910/DVN/28038
The code for 2015 replication studies are not available. Are the authors planning on placing it in the public domain?

The data are available and I've added links to the post above.

That's a great question for the authors of the study. I'd love to know the answer.

Angus Deaton writing in his 'Instruments of development: Randomization in the tropics'(2009) had an interesting tidbit that foreshadows the Worm fracas:
"the point of the RCT is less to show that deworming medicines are effective, but because children infect one another, that school-based treatment is more effective than individual treatment. As befits a paper that aims to change methods as well as practice, there is emphasis on the virtues of randomization, and the word “random” or its derivatives appears some 60 times in the paper. But the actual method of randomization is not precisely described in the paper, and private communication with Michael Kremer has confirmed that, in fact, the LOCAL PARTNERS WOULD NOT PERMIT THE USE OF RANDOM NUMBERS for assignment, so that the assignment of schools to three groups was done in alphabetical order, as in Albert to group 1, Alfred to group 2, Bob to group 3, Charles to group 1 again, David to group 2, and so on. ALPHABETIZATION, NOT RANDOMIZATION, was also used in the experiment"
Should this Alphabetization matter? Deaton elaborates on this as well:
"“Resources are often allocated alphabetically, because that is how many lists are presented, and it is easy to imagine that the Kenyan government or local NGOs, like Miguel and Kremer, used the alphabetical list to prioritize projects or funding. If so, schools higher in the alphabet are systematically different, and this difference will be inherited in an attenuated form by the three groups. Indeed, this sort of contamination is described by Cox (1958, 74–5) who explicitly warns against this sort of convenient design.”