Since the concept of the “informal sector” was coined half a century ago, countries all over the world have promoted the formalization of small- and medium-size enterprises. The perceived benefits of formalization include better access to credit, justice, large formal clients, and, for the government, higher tax revenues. But according to recent literature, most formalization efforts resulted in modest and short term increases in formality rates.

In a recent paper we study pathways to formalization in Peru, and we argue that formalization policies are often based on “informality myths” that affect expectations about the impact of policy and the ability to design effective programs. Three myths seem to be particularly widespread in the policy world:

MYTH #1:  There is only one type of informality. Informality has many facets as recent data shows. Yet many formalization programs operate as if there were only one type of formality, and promote either business formality (registering with the tax authority; acquiring licenses) or labor formality (registering workers with social security) – but rarely both at the same time, although a few programs have begun doing so. However, such a vision could not be further from reality. Firms may pay taxes and have the required licenses, but may fail to register their workers with social security, and vice-versa. Figure 1 shows both labor and business formality pathways by business size in Peru. Firm formality (registration with the tax authority) grows faster with firm size, and reaches almost 100% if the business has 20 or more workers.  In contrast, the formalization of labor grows more slowly with firm size, reaching 80% in very large firms that have more than 100 workers. In our paper, we also find that business formality can induce labor formality, but not necessarily the other way around. 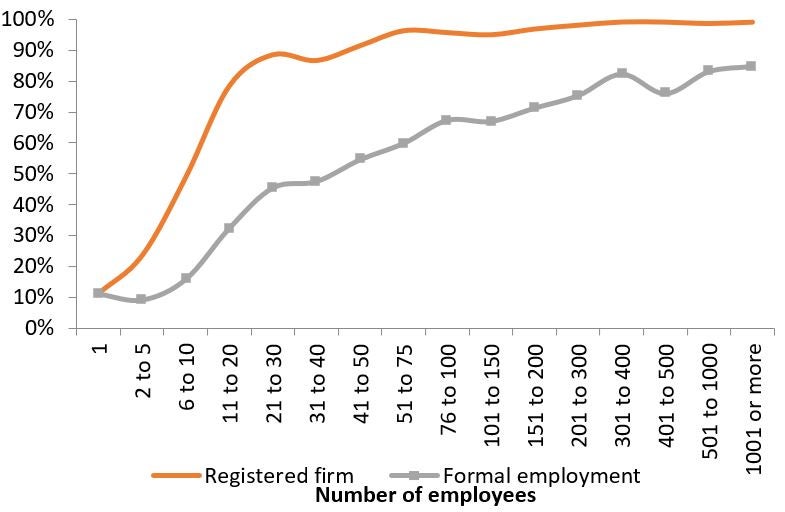 MYTH #2: Firms are either formal or informal. The simplistic vision of informality being a clear, dual concept leads to program designs that miss the way in which small firms experiment with formality. Informality has many dimensions, and firms may experiment with some aspects of formalization (possibly those that deliver the most immediate benefits) while choosing to remain informal along some other dimensions. In our paper we investigate the formality status of 888 Peruvian micro and small enterprises that are registered with the tax authority. Despite being tax-registered, 25% of them did not have the municipal licenses required to operate; 9% did not register their workers with social security; and 12% did not have either the licenses, nor did they register they workers.

MYTH #3: Formality is a permanent status. Too often formalization is perceived as a one-way process: Once firms become formal, they stay formal forever. Yet, as the benefits of formality are not necessarily evident for entrepreneurs, many are likely to experiment with some aspects of formality, learn about the realized benefits, and then choose whether to pursue further formalization or return to informality. 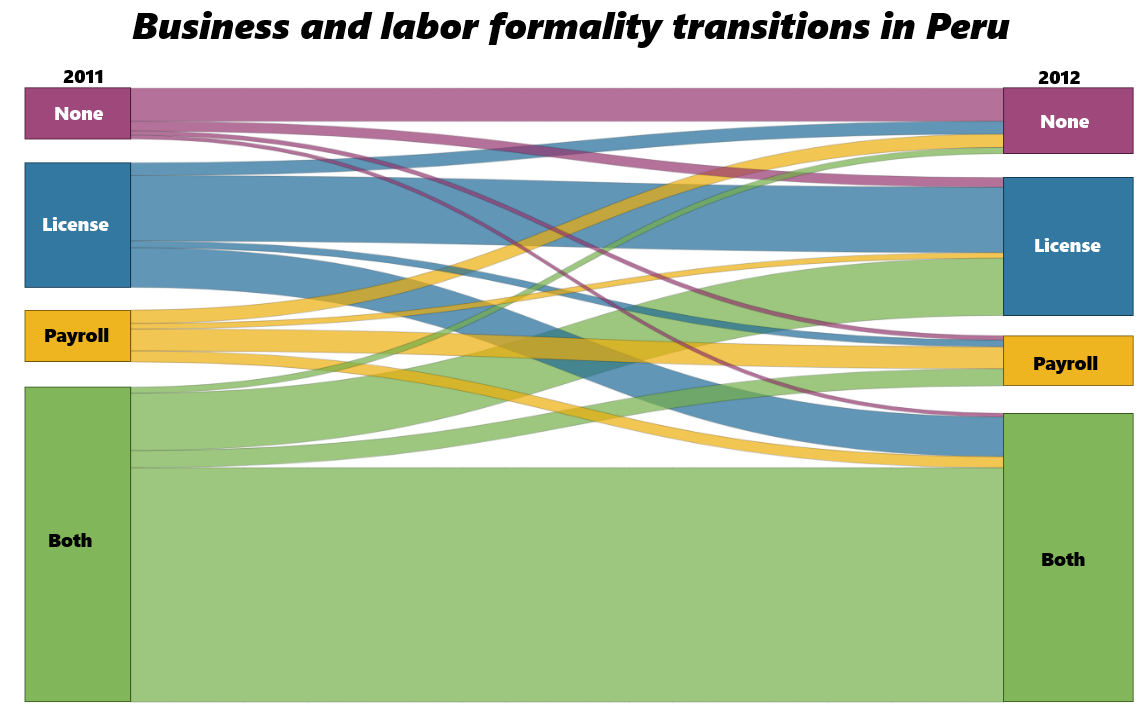 Our research shows that the design of effective formalization strategies requires going beyond the simple formal/informal dichotomy and gaining a better understanding of the nuances of the formalization process. Given the propensity of small entrepreneurs to experiment with formalization (and revert to informality if they perceive the benefits of formalization to be low), and to formalize gradually taking a diversity of pathways, cookie-cutter approaches tackling only one side of formalization are prone to failure. Also, not all informal entrepreneurs are equal, and policies need to understand the specific constraints of entrepreneurs and develop better-tailored solutions. Last but not least, programs take time to produce results: even the most successful policies will not get rid of informality immediately. As the ILO recommends, an integrated and consistent approach is needed.

This blog is based on a paper authored by Juan Jose Diaz, Juan Chacaltana, Jamele Rigolini, and Claudia Ruiz.
Follow the World Bank Jobs blog on Twitter @wbg_Jobs.