Louise Fox is a Visiting Professor at the University of California at Berkeley and Deon Filmer is a Lead Economist in the World Bank's Research Group.

As the world's youngest and poorest region, Sub-Saharan Africa faces a major jobs challenge. Half of the population is under 25, and every year 11 million people enter the labor force — mostly youth looking for work. After more than a decade of rapid growth and expansion of educational opportunities, youth have high aspirations and expectations, and African policy makers are concerned about how to meet them. Jobs and opportunity are at the top of the development agenda. 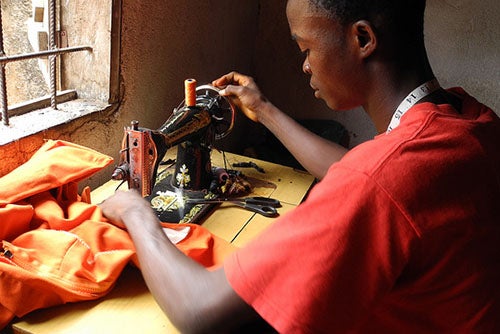 Most African governments are unprepared to meet this challenge, both because they don't have good data and analysis showing what the challenge actually is in their country and because they tend to focus on the complaints of urban, well-educated young males, who may be the most vocal but are actually a very small minority. The overwhelming majority of Africa's young people live in rural areas and towns. Rather than developing expensive enclave youth projects in capital cities, countries need national strategies focusing on all youth and all employment segments — family farming, household enterprises in rural and urban areas, and wage jobs created in labor-intensive private sector firms. Strategies need to focus on raising productivity in each of these segments and helping youth find and grab the opportunities that exist.

To help governments and stakeholders create customized national strategies, we worked with a team from across the World Bank to assemble evidence on how and where countries are creating jobs and how policy makers can help youth to find sustainable economic opportunities (see "Youth Employment in Sub-Saharan Africa"). We found a lot of innovation and some success, but we also uncovered a number of myths that hold countries back from effectively addressing the youth employment challenge. Until the discussion moves beyond these myths and faces up to reality, effective strategies will be illusive.

Myth 1: Urban unemployment is the central problem. Unemployment in low- and lower-middle-income countries in Africa is actually very low because people can't afford to be unemployed. African youth work, often in the same activities as their parents — in household farms and firms. But they may be underemployed, meaning that they can't find enough hours of remunerative activity. In rural areas, they can't find off-season work, and in urban areas, they may spend too much time waiting for customers or for someone to hire them for the day or week. The challenge is to address this underemployment — to enable these working young people to be more productive so their earnings will increase (and they can therefore be more independent and, in time, support a family).

Myth 2: Past growth has been jobless, creating the youth employment problem. Not only was Africa's economic growth high over the past 15 years — averaging 5 percent per annum for the region as a whole — it also created lots of new jobs, with many in the higher productivity industrial and service sectors. Private sector wage employment expanded two to three times faster than the growth of the labor force. But the labor force has been growing so rapidly — over 3 percent per annum — that there was no way for a sector that started the decade employing less than 5 percent of the labor force to expand rapidly enough to absorb a substantial share of the new entrants. The biggest job creator in the past was the household enterprise sector (which includes very small businesses run by one person or their family, out of their home, on the streets, or in a simple marketplace), followed by agriculture (see Figure 1).

Figure 1: Where Africa works
(Estimated structure of employment in Africa by country type, 2010)

Source: "Africa's Got Work to Do: Employment Prospects in the New Century," IMF, WP/13/201.
Note: HE stands for household enterprises. 183 m stands for 183 million people.

Myth 3: Effective industrial policy will solve the youth employment challenge. One way East Asian tiger economies created new, more productive jobs was through expanding the manufacturing sectors. African countries haven't been able to duplicate this success, leading some to call for new industrial policies. As important as it is for African countries to transform their economies, even under the most optimistic policy scenarios, only about 25 percent of African youth can expect to get any kind of wage job in the near future — casual or formal — and most of these won't be in manufacturing (see Figure 2). The other 75 percent will have to make their own jobs in agriculture and household enterprises. These youth are the ones needing the most support to find a sustainable and rewarding livelihood. This is a particular challenge in the poorest countries, for youth growing up in the poorest families, and for young women.

Figure 2: Where the new jobs will be


Myth 4: The problem is a lack of vocational training. Despite being the most educated generation of Africans ever, young people emerge from school lacking basic cognitive skills. In rural areas, 60 percent of African youth are entering the labor force without even completing primary education, and 50 percent of all females aged 15-24 don't complete primary education. Moreover, alarming proportions of those who complete primary school don't get beyond the most basic levels of numeracy and literacy (see Figure 3). Even the most effective vocational training program can't make up for missing cognitive skills, and African public vocational training programs don't have a track record of being highly effective. Public resources and attention need to focus on ensuring that basic education provides a solid foundation for skills development.

Figure 3: A low report card in math
(Percent of test-takers who do no better than "basic numeracy" on a math test)


Myth 5: Agriculture offers no hope for youth. Despite current low levels of productivity and earnings, Africa's family farm sector offers opportunities for young people. Africa still imports a lot of food, and prices are high. With the right policies and programs, Africa's agriculture sector can meet regional and global demand, as well as provide the inputs to a growing agribusiness sector. Youth can be part of this agriculture renaissance, but they need access to land, to inputs and know-how, to markets, and to finance. Customary land tenure systems tend to exclude youth, and this has to change for youth to be interested in farming.

Myth 6: The household enterprise sector is a dead-end; policies should focus on small- and medium-sized enterprises. In most low- and lower-middle-income countries outside of Africa, governments and society recognize that household enterprises supply affordable goods and services for low- and middle-class households and are an important source of income. These informal vendors, hairdressers, tailors, brickmakers, and small-scale manufacturers of custom items almost always stay small and informal, but they are often the best livelihood choice for many people without the education or skills to either run a larger business or get a wage job. Youth's entry into this sector by creating new independent businesses should be supported by national and local governments. But in Africa, governments too often do the opposite — they undermine household enterprises, by not providing the infrastructure, support, and security that would allow them to operate productively. I have been looking for succinct responses like these, around which we can build the structures required for sustainable mass employment.
The only myth on which my agreement is not complete is No 2.
However, I don’t think past growth was created with employment in mind, and it should not be blamed. Investments are not necessarily social enterprises.
But, having said that, social enterprise is what we need, with a quadruple social, spiritual, ecological and economic bottomline.

Sub Saharan Africa is loosing out on addressing youth unemployment because of down playing Myth 5. Our leaders have ignored the Maputo Declaration and allocate a dismal share of the national budget to this sector. Many countries have failed to understand why youth do not desire agriculture but agribusiness (what many now in Uganda call, "Cool Agriculture.").
In my last 3 years of engagement with youth, I noticed that many youth who venture into farming as a business have higher potential to exit extreme poverty compared to their counterparts in low wage formal employment largely driven by vocational skilling. This is because these youth target ache markets especially of horticultural crops and small ruminants with high market potentials and very short gestation period.
Until our policy makers wake up to the truth that our jobs, wealth, and inclusive development inheres in agriculture, many wrong choices as are indicated in the various myth will continue to persists unfortunately to a bulging unemployed youth population whose delayed transition (or increased wait hood) will only increase household dependency ratio, widen economic inequalities, and frustrate SDG.