Customs Union between Guatemala and Honduras, from 10 hours to 15 minutes! 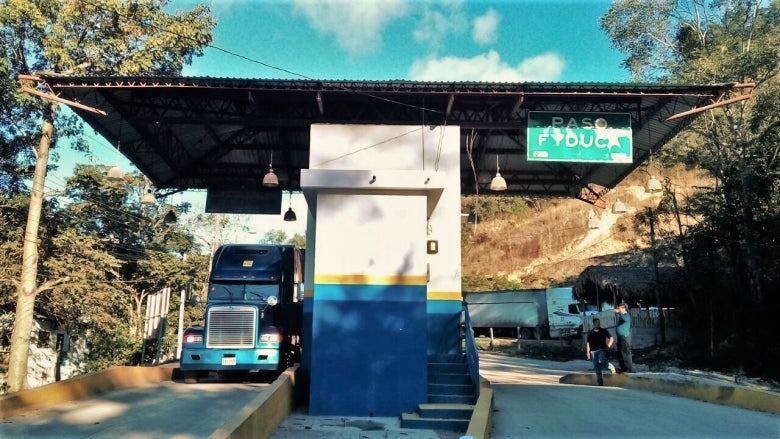 Trading across borders in Central America has been a severe problem for many years. In 2017, cargo trucks used to spend 10 hours to travel less than one kilometer across the borders between Guatemala and Honduras. Such delays at border crossings made trade throughout the region slow and expensive.

The region has made concrete progress toward integrating its national economies and expanding its global markets, but regulatory and procedural constraints, the quality of secondary roads, and transport and logistics barriers have limited the gains.

The most significant regulatory and procedural bottlenecks are outdated regulations, duplicate documents and manual procedures. For example, Guatemala and Honduras have for many years required identical paperwork and duplicate processes on both sides of the border.

The Customs Union aims to facilitate trade between Guatemala and Honduras, speeding it up and lowering its cost. The two countries have integrated their trade procedures at three common land borders: Agua Caliente, El Florido, and Corinto.

Instead of duplicate procedures and paperwork on both sides of the border, trade between Honduras and Guatemala now requires only a single online instrument called “FYDUCA” (Factura y Declaración Única Centroamericana – Central American Invoice and Declaration).

At the border, a reader device instantly scans a FYDUCA Quick Response Code (QR code) and quickly certifies—online—whether the buyer (importer) already paid the value-added tax on the goods in the destination country. In other words, FYDUCA eliminates customs procedures at the borders.

Starting March 1, 2018, both countries made the use of FYDUCA mandatory. The private sector can now trade 80% of products of free circulation between both countries faster. There is every reason to expect that faster and cheaper trade will increase the volume of trade, leading to a greater variety of more affordable goods on the market, and thereby contributing to the economic growth of both countries.

The World Bank Group (WBG) has supported the joint Customs Union effort under the “Regional Central American Project to support the implementation of the World Trade Organization-Trade Facilitation Agreement”. The WBG provided technical assistance to the Government of Guatemala, the Government of Honduras, and SIECA on the development of FYDUCA, helped train more than 150 companies how to use it, and supported pilot exercises with three regional companies.

In January 2018, “Grupo BIMBO Centroamérica” became the first company to pilot trading between Guatemala and Honduras using FYDUCA and the integrated processes. The company’s General Manager, Arturo García Castro, recognized the WBG’s support and mentioned that, with the new system, it took only 15 minutes to cross the border.

He also described how, under the Customs Union, his company only had to go to a single customs post and carry out a single procedure to trade across the border.

He told me that the unification of customs represents less time and costs, which leads to more business opportunities with our clients and an increase in trade. Colgate Palmolive and Unilever also took part in the pilot and achieved similar results.

There are still many challenges to overcome: companies that need training, issues with infrastructure, problems with the systems of both countries, insufficient knowledge of the new procedures, and so on.