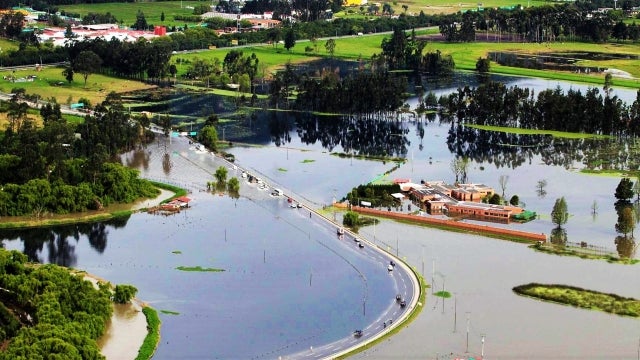 Colombia has been frequently hit by disasters. In 2016 alone, nearly a million Colombians were affected by disasters associated with adverse natural events, mainly caused by floods and droughts. In a region such as Latin America, where the number of recorded disasters tripled between 1970 and 2014, strengthening policies for disaster risk management and climate change adaptation is crucial and increasingly urgent.

Damages to property, infrastructure and livelihoods have continued to multiply in Colombia, largely due to increased vulnerability resulting from a variety of factors, including unplanned and often uncontrolled urban growth, inadequate environmental management and land use planning, as well as the limited application of construction standards and codes.

Disasters have a major and direct impact on the sustainability of the country’s growth. An IDB-ECLAC study found that the 2010-2011 La Niña Phenomenon, besides affecting 2 million people, led to some US$ 11.2 billion in losses, or the equivalent of 2% of Colombia’s GDP that year.

The Mocoa landslide occurred in April 2017 when the Mulato Sancoyaco and Mocoa rivers burst their banks, destroying 17 neighborhoods and killing more than 320 people. It demonstrated that disasters can be localized and brutally punish the population and infrastructure of mid-size and small cities, especially impacting the poorest households.

Unplanned urban growth of small cities generally occurs in marginal neighborhoods and irregular settlements outside the utility service area. Small cities have less capacity to adequately manage disaster risk and to mainstream it in the design and implementation of urban planning and land use and management policies. In this context, there is an evident need for the national government to provide specific technical assistance to local government on these issues.

In Latin America, Colombia has become a leader in developing a comprehensive approach to manage disaster and climate-related risks that is explicitly incorporated in each National Development Plan. Advances in hazard monitoring, implementation of early warning systems, and organization of emergency response and management have significantly reduced the loss of life due to disasters in the recent years.

Nevertheless, the country faces the major challenge of strengthening the implementation of land use policies that incorporate disaster risk management and climate change adaptation measures. There is a legal and institutional framework that creates the necessary planning tools and mechanisms, but municipal governments have limited capacity for including risk reduction measures in Land Use Plans (POT) that can be effectively implemented. Additionally, there is a clear lack of linkages and alignment of the different land use planning instruments in the country.

Successful implementation of disaster risk management policies generally go unnoticed and underappreciated.  It is the lack of headlines for the disasters that do not occur, or with their magnitude  drastically reduced, when risk reduction criteria are incorporated in public sector investments, as well as in the design and implementation of policies and instruments of urban and land development. A key requirement is to produce and then widely and transparently disseminate the information on hazards and risks required by different national sectors, as well as robust information to be used at the local level. Technical capacity exists at the national level; what is needed is the coordination and definition of a clear route with clear short-, medium- and long-term objectives. Efforts should concentrate on building local government capacity to implement these challenging tasks.

Agencies responsible for disaster risk management should be highly technical and operationally savvy.  They should be able to lead inter-institutional coordination efforts to facilitate the implementation of risk reduction measures and guide the design of public policies that incorporate those criteria at the territorial and sector levels, which correspond to a medium- and long-term agenda. The response to and management of emergencies should be the responsibility of an institution that can manage day-to-day efforts and that has an immediate capacity for mobilization and action to lead coordination at all levels of government.

Disaster risk management is not a specific sector and should not be considered as such. Integrating disaster risk management and climate change adaptation considerations should be carried out with those responsible for sectoral and territorial planning, which are both implementers and affected in the event of a disaster.