Do rich and poor countries have different approaches to counter-cyclical spending?

Why? It’s more than just the short-term effect of lower government purchases.  Talvi and Végh found in a 2005 study that lower expenditures on infrastructure, public health and education can result in less human capital development and lower productivity, increasing an overall downturn.

You can see that in the chart below: OECD countries (in red) are concentrated in the lower left quadrant, which represents fiscal policy that’s counter-cyclical both in boom and recession times. Many of the world’s poorest countries, meanwhile, are in the upper right quadrant, meaning their fiscal policy is pro-cyclical in both times. It’s a complicated trend to measure, however, with some countries being counter- or pro-cyclical in one situation but not the other. Nonetheless, it’s clear that counter-cyclical fiscal policy is far more common in the developed world. 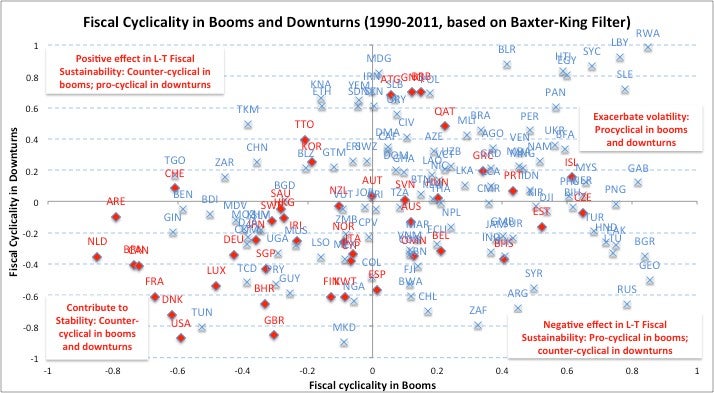 Thank you for this concise blog on an important issue. Two observations. One, there is a need to learn more about the other half of macroeconomic policy: countercyclical monetary and financial regulatory policies. Two, the three explanations above are plausible but there are really only two: external and internal/political. Most delays in executing fiscal policies, in particular public investments, have deeply political roots even after accounting for capacity constraints.