From Japan to Panama: Drawing your ideal city

Have you ever invited representatives from different sectors to imagine their dream city? All around the table, designing their neighborhoods with wide public spaces and green areas, accessible platforms for cultural activities and even spaces that retain water to prevent flooding. There is an urban planning exercise that is just for that, and it is showcased by the experience of the Río Abajo basin in Panama City.

The metropolitan area of Panama City has around two million inhabitants and, according to the 2010 census, approximately 130,000 live around the Río Abajo basin. This basin has an approximate extension of 23 km2 and has three large and diverse sections. The medium-high section of the basin is characterized by modern urbanizations, a public transport hub at the San Miguelito metro station and an industrial area. In the lower-middle section is the Río Abajo community, characterized by its Afro-Antillean population, while the lower basin integrates the neighborhoods of Panamá Viejo and Puente del Rey, the archaeological site of Panamá Viejo and its surrounding wetlands.

How do we imagine a new Río Abajo basin?

Japanese experts from the Tokyo Development Learning Center and local experts from Florida State University's Urban Risk Center got together to build a joint vision using the Japanese Cityscape Sketchbook methodology for the three areas of the basin. We invited officials of the Municipality of Panama, community representatives, cultural heritage specialists, NGOs, professors and university students.

This methodology uses sketches to engage citizens in the exchange of ideas on the design of their territory.  The premise is simple: design begins with the vision of one’s ideal lifestyle. With this method, participants discovered the opportunities offered by the river by enabling more contact with nature within the city, in addition to connecting the different communities located throughout the basin.

Seven principles of urban design from the Cityscape Sketchbook methodology:
1.    Ensuring safe and comfortable walking spaces
2.    Taking into consideration natural characteristics such as topography and vegetation
3.    Placing value on waterfront spaces of the sea and rivers
4.    Increasing and expanding open spaces and green areas
5.    Placing value on the historical and cultural assets
6.    Increasing places for people’s interaction and communication
7.    Seeking morphological and visual beauty

Three visions for a more resilient basin
Through drawing, the Cityscape Sketchbook method facilitated the appropriation of urban design by all the participants, in a context where the technical language is difficult to understand.  The three proposals are reflected in the following sketches:

1. Mi Ecociudad Soñada, in the upper middle basin, visualizes a community that actively participates in the recycling and care of its public spaces, generating a green corridor along the river with wide open spaces for the population's enjoyment. 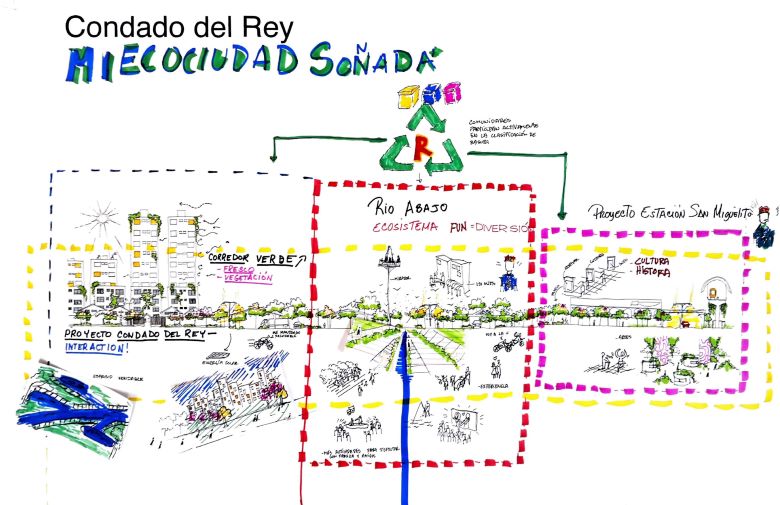 2. Reviving proposes a Río Abajo community that uses water sustainably, for example, through rainwater harvesting. It also envisions a strong leadership and commitment in the community to preserve its rich culture and history. 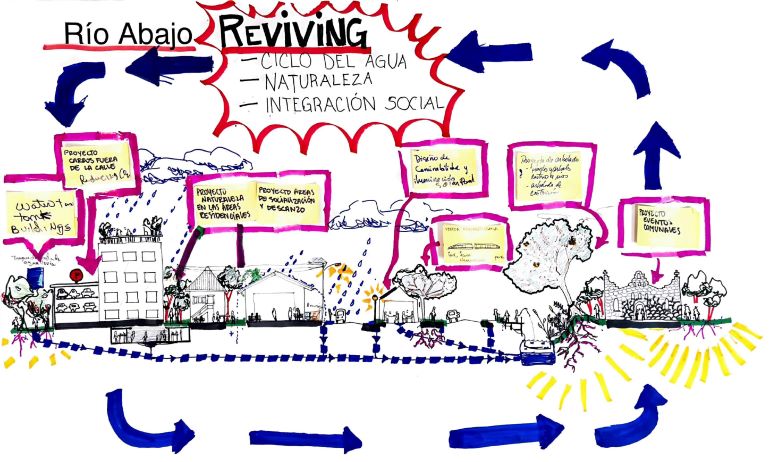 3. Conexión focuses on generating better communication between the river, the city and the Panama Viejo historic site through a waterfront path that connects the Panama Viejo visitor center with the surrounding wetlands. 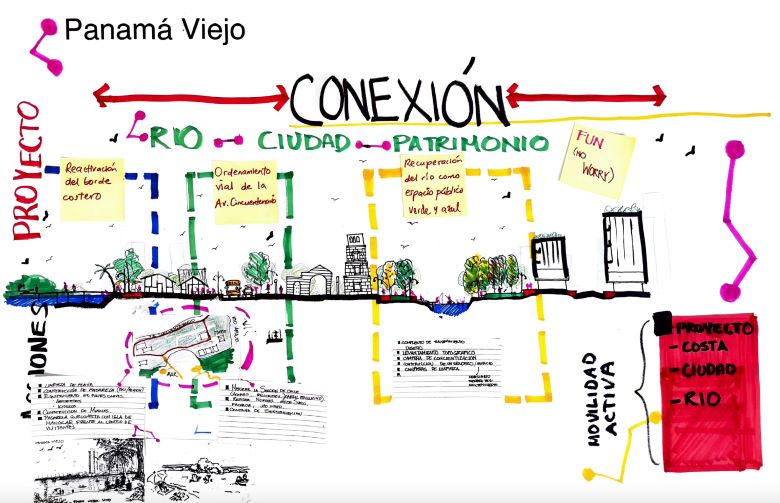 The workshop allowed all participants to recognize themselves as part of the same project: the Rio Abajo basin. Representatives from the Panama Viejo historic site, river and wetland advocates, and residents came together to work on the design of a more resilient urban basin. The results generated great interest from the Municipality of Panama’s new Directorate of Ethnic Groups, which, with the workshop’s contributions, is promoting the renovation of the Vereda Afroantillana or West Indian Walkway in Río Abajo. This is an example of a bridge generated between citizens and authorities informing the city’s urban design.

Given the current COVID-19 (coronavirus) pandemic, the principles of the methodology along with several of the proposals that were generated in the Río Abajo workshop are even more relevant for increasing resilience in cities. Open spaces become more essential than ever in a context of physical distancing. In this sense, urban coasts and rivers offer us opportunities to generate these healthy environments for circulation, recreation and other activities within cities.

The authors of this article wish to dedicate it to the memory of Camilo Villa, who passed away a few months after facilitating this workshop in Panama. Get to know him through this video. Hello! Im Jon and I am a big fan of your work and the Open Gov project. Myself, I was in the US Army for 7 years. I recently received my BSci degree in Homeland Security (A,A in Psychology). I am in microwave radio engineering and CloudSysAdmin programming now.
I will be travelling to Panama this year and was wondering if anyone there would be interesting in collaborating. There are some great and affordable tools that would absolutely make water chemical testing and other sensor systems on a scalable level. Hope you stay well and safe!