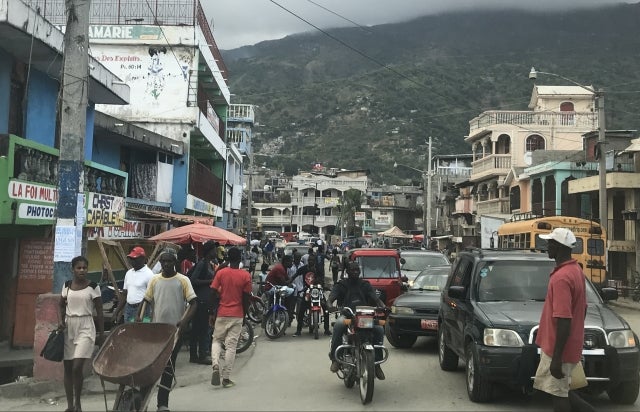 Landing in Port-au-Prince awakens your senses. Exiting the airplane, you are re-energized by the explosion of colors, the welcoming smiles, and the warm weather – particularly when coming from a cold January in Washington, D.C.  Loud honking, a high density of houses and buildings, and streets bustling with pedestrians and small informal businesses are all evidence of the rapid urbanization process in Haiti.
As soon as you land, the challenges of the city are evident; Port-au-Prince expands to the ocean on flat plains exposed to flooding and quickly rises on steep hills with challenging access and risks of landslides and flash floods.  The reconstruction efforts after the earthquake in 2010 are still ongoing, and many of the houses seem to be hanging from the sky, perched on steep slopes. If you look at the houses from afar they appear as a single skyscraper, as distance makes the houses seem as if they are built on top of the one another. These false skyscrapers are highly exposed to landslides, flooding and earthquakes.

[Read: Five Reasons Why Haiti Should Invest in Resilient Cities]

“Haitian Cities: Actions for Today with an Eye on Tomorrow” – launched in January 2018 in Port-au-Prince and Cap Haitien, the second largest city in Haiti, provides evidence of the challenges of urbanization in Haiti and puts forward actions for changes along three lines:

The vibrant discussion in the two cities and the extensive media coverage showed how these issues resonate across all levels of government and private and public sectors and are at the heart of citizens’ thirst for information. There was a sense of optimism and urgency to have inclusive and efficient urbanization of Haiti’s cities.

[Download: Investing in Urban Resilience: Protecting and Promoting Development in a Changing World]

In the past decade, Haiti has experienced natural hazards, including the devastating 2010 earthquake that claimed some 220,000 lives and cost 120 percent of GDP in damages and losses; and hurricanes, including the 2016 hurricane Matthew which affected over two million people and inflicted damages equivalent to 29 percent of GDP.
Still, there is a growing urgency for all stakeholders to work together and build Haiti’s long-term resilience to disasters  and at the same time create jobs and improve service delivery. As the proverb goes in Creole “Nou Se Wozo, Pliye Nou Se Pa Kase”, which translates as “We are like a reed, we bend but we don’t break!”