Wage Inequality in Latin America: Understanding the Past to Prepare for the Future 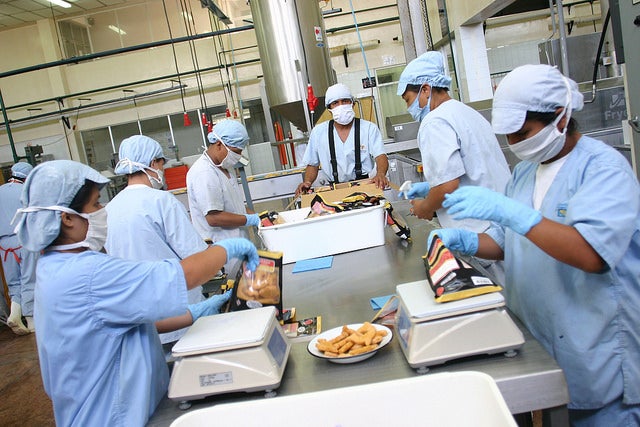 In the early 1800s, the Prussian scientist and explorer Alexander von Humboldt wandered the streets of Mexico City and Lima and wrote of his astonishment at the misery and wealth, the "nakedness" and the “luxury", the "immense inequality of fortune."  This image endures. The region, along with Sub-Saharan Africa, is the most unequal in the world today.

But things are changing. Since the start of the new millennium, inequality fell significantly in virtually every Latin American country and continues to drop. Millions benefitted from more education and rising wages, especially for unskilled workers.

Julian Messina of the Inter-American Development Bank and I explain this remarkable trend in our report "Wage Inequality in Latin America".

Our key finding is that reductions in wage inequalities-- rather than capital or rents -- were central to the big push forward. In 16 of the 17 countries studied, wage inequality fell significantly since the turn of the millennium.

In Latin America, wage differences narrowed between workers with similar education and work experiences who were employed by different firms. The differences also narrowed between high and low skilled workers. Each accounted for about half of the overall wage gap decline.  This stands in stark contrast to the struggle with constant or rising wage inequality seen in the rest of the world.  This figure shows such trend: 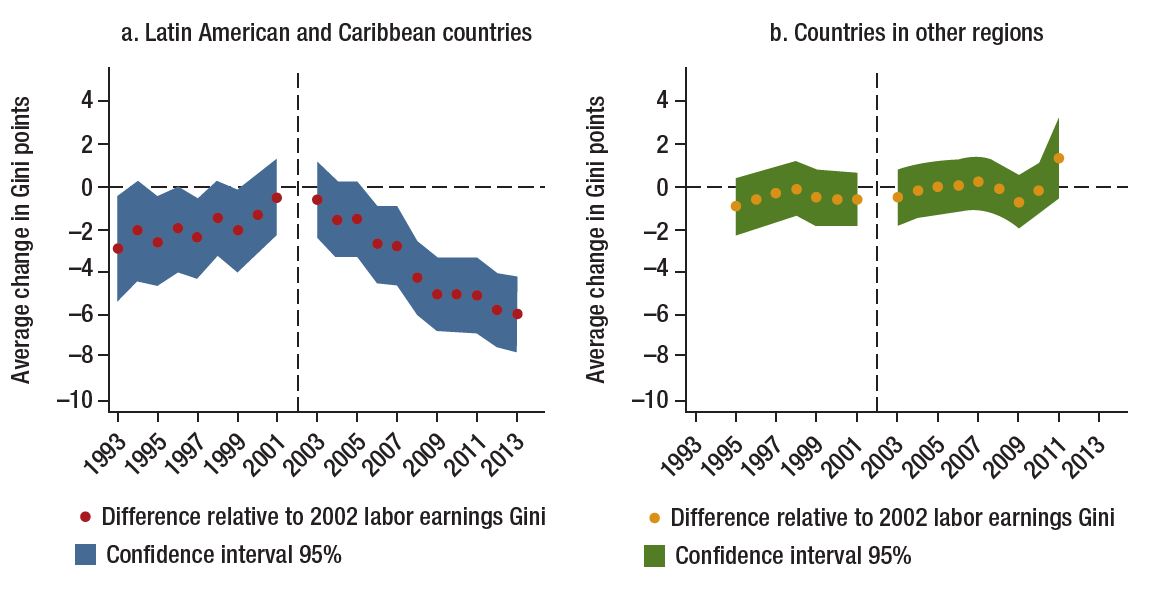 The commodities boom of the 2000s was fundamental to the inequality reduction in South America. Money poured into countries across the region. Individuals, businesses and governments went on a spending spree, splurging in non-tradable sectors like services, and currencies appreciated.

Growth led to more equal wages through two channels. First, since it was associated with real exchange rate appreciations in South America, it boosted the non-tradable sector where wages are more equal across firms (for workers with similar skills) than in the tradable sector. Second, it reduced the number of exporting firms. Exporters demand high skill labor. Hence, as their numbers decline, the demand for skill fell.

An education boom
This economic boomtime also coincided with an immense education transformation. High school attendance shot up. Millions more went to college for the first time. But this also meant that the wage premium for education declined as more Latin Americans with degrees entered the workforce. Wages for low-skilled workers were driven up because less of them were available for hire. In addition, the wage premium for well-educated older workers fell, perhaps due to their inability to adapt to rapidly-changing technology.

Of course, other factors were at play. Informality fell during the 2000s as firms hired more low-skilled laborers and compliance improved, giving workers greater bargaining power when it came to benefits and wages. New laws dramatically boosted minimum wages in several countries, including Brazil and Argentina. Redistributive policies like conditional cash transfers also played a role. But in terms of falling wage inequality, these factors were secondary to growth and rising education.

A future with lower growth
While inequality continues to decrease, the pace has slowed since mid-2011. Inequality reduction in countries in South America now looks more similar to that of Mexico and Central America.

In the future, education expansion is likely to continue, fueling equalization. However, the new pattern of slower growth post-2011, associated with real exchange rate depreciations, will slowdown wage inequality reduction. In addition, there is less space for minimum wage hikes now. While minimum wage can help to ensure the poor aren’t left behind during boom times, minimum wages hikes may depress formal employment during periods of weaker growth. For example, economic growth was low between 1995-2003 in Brazil. Minimum wage hikes during that period actually drove up wage inequality as the higher salaries dampened hiring by companies and many workers ended up in informal, low-paying jobs or earning less than the minimum wage.

As we argue in the book, there are two areas where governments can support the growth with equality: education and productivity.

Efforts should focus on continuing to expand the coverage and quality of education and training. Quality, not just access, is key. This means improving education for children from disadvantaged households through better public schools. It also means investing in the skills of the working age population.

The new pattern of growth can lead to the expansion of more productive firms. This can be beneficial for long-run growth. Policies should not hinder productivity growth. Removing policies that protect inefficient firms (e.g. reforming corporate subsidies), or reforming antitrust and competition policies can be important steps. Technological change should be embraced, not feared.

Yes, we are in a slowdown. But we needn't be passive observers. We should celebrate the recent, large declines in inequality and redouble efforts to ensure the progress continues.

If you want to know more about this topic, don´t miss the presentation of the report at The Wilson Center. You can see the webcast here