When a police officer, an ex-gang member, a government official, and an academic walked into a room… 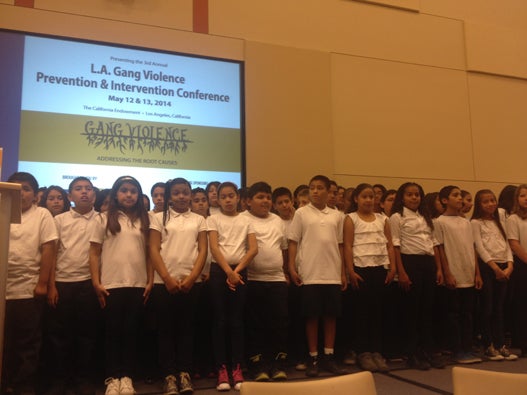 As we walked into the offices of the California for Endowment, in Los Angeles, some friendly faces greeted us with a big smile: “Welcome to the L.A. Gang Violence Prevention and Intervention Conference!” Most of them were former gang members, who were also welcoming police officers, government officials, academics, representatives from non-governmental organizations, and US and international local authorities for two days of dialogue to strengthen a collaborative and integrated approach to violence prevention.

This past May, the Violence Prevention Coalition of the Greater Los Angeles (VPCGLA) hosted its third conference of this kind, in a continuous knowledge exchange effort to discuss lessons learned by some of the most successful gang prevention and intervention programs in the US, which have contributed for the past eleven consecutive years of falling crime rates in the L.A.

This year, the World Bank-led RESOL-V – Solutions to Violence Network and TheHive supported the conference, also bringing a group of more than 20 local governments and civil society organizations from Colombia, El Salvador, Guatemala, Honduras, Mexico and Brazil. The activity included a two day study tour, which was joined by another delegation of officials from Latin America and the Caribbean brought by USAID, a RESOLV partner.

“When you ask what causes violence, it stops being someone’s problem”, was the sentence that set the tone for the discussions. The main objective of the conference was to examine the root causes of gang violence and potential solutions to address them, and exchange with different people experiences dealing with these issues, from their own professional and personal perspectives.

We then heard stories of victims of violence who survived and decided to help others who had been through the same; listened to former gang members who had second and third chances, and were able to turn their lives around to now help others follow the same path; and learned about how cities were able to come together in unique collaborative efforts to rehabilitate ex-offenders and prevent youth from joining gangs, departing from a “mano dura” approach to an integrated one, that included a blend of prevention, intervention, and enforcement, with strong community engagement and political leadership.

We had the opportunity to hear from former gang members what they consider the main causes of gang violence, and reasons why they had once been a part of it. They shared stories of broken homes that led to a search for a sense of belonging and acceptance; talked about exclusion and lack of opportunities, about growing up where violence was part of the relationship with and between family members and neighbors; and shared stories about traumatic events that would later influence their behavior and impact their lives.

As different speakers simply put, repeatedly: “hurt people, hurt people”. Panelists highlighted the importance of integrating trauma-informed approaches to prevention interventions.  They also made it clear that we need to go beyond our focus on youth, who compose the majority of victims and perpetrators of violence, and on strengthening institutions, to work with families as well.

This was one the key messages taken, for example, by Suzana Flores, from Honduras. “We need to keep reinforcing parents’ social skills, protection, and health and positive reinforcement with the adequate and non abusive discipline to build relationships of trust at home”, said Suzana after one of the plenary sessions.

The study tour exposed us to an array of violence prevention policies, programs, and strategies that have proven to work in LA. "Imagine if every survivor of violence turned into an activist", said Vice Minister of Public Safety from El Salvador, Mr. Javier Martinez, inspired by our visit to L.A.U.R.A (Life After Uncivil Ruthless Acts), a non-profit focused on empowering and supporting youth, victim-survivors, and their families, and made up by people whose loved ones have been murdered.

This was the same thought many of us had when coming out of Homeboy Industries, the largest gang intervention program in the US, where formerly gang and previously incarcerated men and women receive training, job skills, psychological and judicial support, tattoo removal and other services.  “Change is possible no matter how hard the context will be”, explained Duc Ta, a former gang member who was sentenced for 35 years.

The LA Gang Reduction and Youth Development (GRYD) program former director, Guillermo Cespedes, told us the story of how the city realized that, unless it aimed at reducing risk factors, and not only violence, the cycle of violence at its roots would never be disrupted.

So the program brought prevention workers to work together with police, schools and community organizations in areas with the highest rates of gang-related crime, which also had extremely high truancy and school drop-out rates, poverty levels, and unemployment, to provide services to young people and prevent their recruitment into gangs.

“The most successful projects are not necessarily the ones that have more resources, but rather those that have stronger community participation”, said Gonzalo Suárez, who joined us from Mexico, after visiting one of GRYD grantee organizations.

It was also clear to us that all of these efforts were able to succeed because there was a strong joint, multi-sector, multi-agency collaborative framework in place, in which political will and community engagement were also crucial. The VPCGLA and the California Cities Gang Prevention Network are good examples of that.

These types of initiatives helped LA to move from a “program perspective” to a “strategy perspective” in dealing with violence prevention. The key for success for these types of partnerships implemented in LA, said Annie Lyles, program manager at the Prevention Institute, is that “they are not just about sharing practices, but rather about thinking together of how to do it”. And that’s exactly what happened during those days, when a police officer, an ex-gang member, a government official, and an researcher walked into a room…

The next RESOL-V knowledge exchange activity will take place in Guatemala in November, and will focus on Youth Violence. If you would like to know more about RESOL-V or become part of it, please contact Andres Villaveces – [email protected]. Click here to watch some of the LA Gang conference’s sessions.
Topics
Fragility Conflict and Violence
Social Sustainability and Inclusion
Countries
Brazil
Colombia
El Salvador
Guatemala
Honduras
Mexico
Regions
Latin America & Caribbean