From crisis response to building resilience in Madagascar’s Great South

Severe droughts are regular, cyclical events in the ‘Great South’ of Madagascar. In this beautiful, but arid region the country’s poorest people have become accustomed to bracing for the onset of droughts, then coping with the crisis by pulling children out of school, selling off assets, cutting down on food and waiting for humanitarian assistance.

What is being done to break this cycle and build resilience? The Ministry of Social Protection’s Fiavota (rescue in Malagasy) program was introduced in 2016 as an emergency response to a particularly severe drought, exacerbated by El Niño. Led by the Social Fund for Development, Fiavota partnered with the National Nutrition Office to extend cash transfers and nutrition services to the most vulnerable households in the Anosy and Androy districts.

However, beyond simply responding to the crisis, the Government of Madagascar has used Fiavota to build resilience. The program’s focus on households with young children recognizes the value of accumulating and protecting human capital. Not only does the program monitor the nutritional status of the youngest children and provide supplementation and referral services, but it also promotes investments in children’s human capital by encouraging exclusive breastfeeding, family planning, early childhood stimulation and school attendance. These synergies across education, health, nutrition and social protection are at the heart of Madagascar’s human development work, including the Human Capital Development Policy Operation under preparation to support a series of foundational reforms and increase the national resources allocated to social protection. In Madagascar, only 0.3 percent of GDP is invested in social protection compared to an average of 0.75 percent in other countries in the region such as Mali, Chad, Malawi and Niger.

The results from Fiavota have been notable. After 15 months, food security, dietary diversity and overall consumption have improved significantly; 87% of households have acquired assets in the form of livestock, compared to 21% of the control group. Among children, global acute malnutrition and child labor have been reduced by almost 50% while primary school enrollment is up 20%.

In our recent field visit to the Great South with Marie Chantal Uwanyiligira, the new Country Manager for Madagascar, Robert Chase, Social Protection and Jobs Practice Manager, the Mother Leaders stood proudly in their blue vests, introducing us to their groups and encouraging Fiavota program participants to share testimonies of how they have been able to send children back to school, accumulate assets and rebuild their own confidence. It was inspiring to witness what the impact evaluations have revealed – that these mother leaders’ work and the behavioral interventions have translated into improved assets for the households, greater engagement by women’s in making household decisions, and improved school attendance and even cognitive performance among children–above and beyond the delivery of cash alone.

The basis for this work is centered in communities where small groups of beneficiaries are headed by elected Mother Leaders who serve as coaches within their groups and support the other mothers in managing their resources and planning for their future.  They received and pass on training on managing finances, parenting, nutrition and hygiene.  They have also received training in behavioral interventions and work with the other mothers to plan how to spend their transfers, invest in their children’s future and link intentions and actions.

We also met Lucky Rasoamanana, a disabled mother with three children. She was abandoned by her husband many years ago and could not even produce daily meals for her household. She benefitted from Fiavota and can now send her youngest daughter to school: “Not only does Fiavota gives me funds, enabling me to bring food to my children, it also gives me hope for a better future for my youngest girl because she now goes to school.  It has also given me a sense of being valued. I am a disabled woman. I have always lived as someone that has hardly been noticed, but now I am fully recognized as a member of my community.” 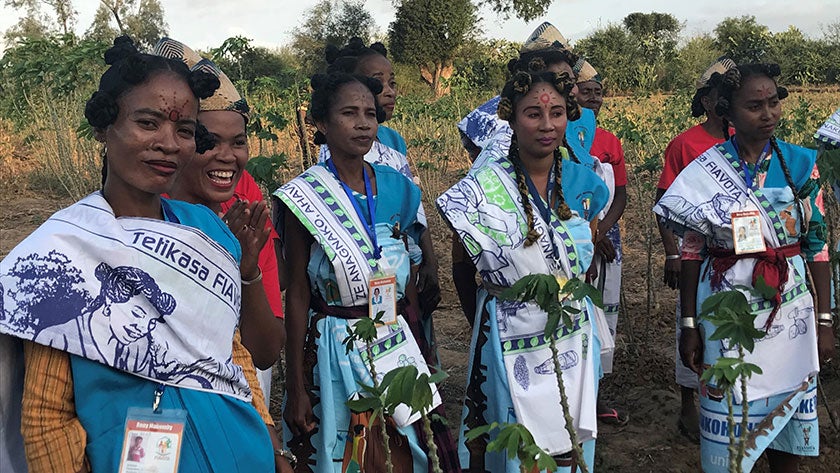 On an institutional level the program is also allowing for a rapprochement between the government’s safety net program and humanitarian assistance. In the Beloha district, for the first time in Madagascar, the World Food Program used the national safety net to top up and expand cash transfers in response to the most recent drought. This positive experience bodes well for the future, including through the support of a CAT DDO operation that will strengthen the role of the Ministry of Social Protection in managing crises and working with humanitarian agencies.

These investments in human capital and women’s empowerment are often accompanied by investments in productive enterprises, usually in agriculture and livestock.  These community-based bottom-up income generating activities are key to migrating people from assistance but need to be completed by infrastructure investments in roads, water and the software of good governance. This is part of the full plan for the Great South which includes a CDD program under preparation as well as IFC investments in export-led growth.

From institutional coordination, to community development, to working with mothers and the youngest children, the Bank is supporting scalable solutions for the Great South and working with the government to move from crisis response to resilience.