Making Progress Towards Polio Eradication in Nigeria, Despite Boko Haram

Many people were bitterly disappointed when four cases of wild polio were discovered in August 2016 in insecure areas of Borno State in the northeast of Nigeria. Nigeria had gone for almost two years without any cases of wild polio being detected, and was just a year away from being able to declare polio eradicated. (Wild polio is the type of the virus found in nature, as opposed to in a vaccine.)

The government’s response to the new cases was rapid, relentless, and effective. It made dramatic progress in controlling the outbreak, with support from the World Bank and other partners. There have been no wild polio cases since.

These efforts against polio are impressive given the fact that they were actively resisted by Boko Haram insurgents. In the past, Boko Haram has targeted vaccinators, killing nine of them in 2009 and three more in 2012. It has warned members of the population against accepting vaccination against polio. It has also destroyed roughly 35% of health facilities and damaged a further 10% in Borno, and more facilities in the bordering states of Yobe and Adamawa.

The insurgents have captured local government areas (LGAs), rendering them inaccessible to vaccinators and disease surveillance teams. But progress towards polio eradication was made despite the obstacles (see figure). 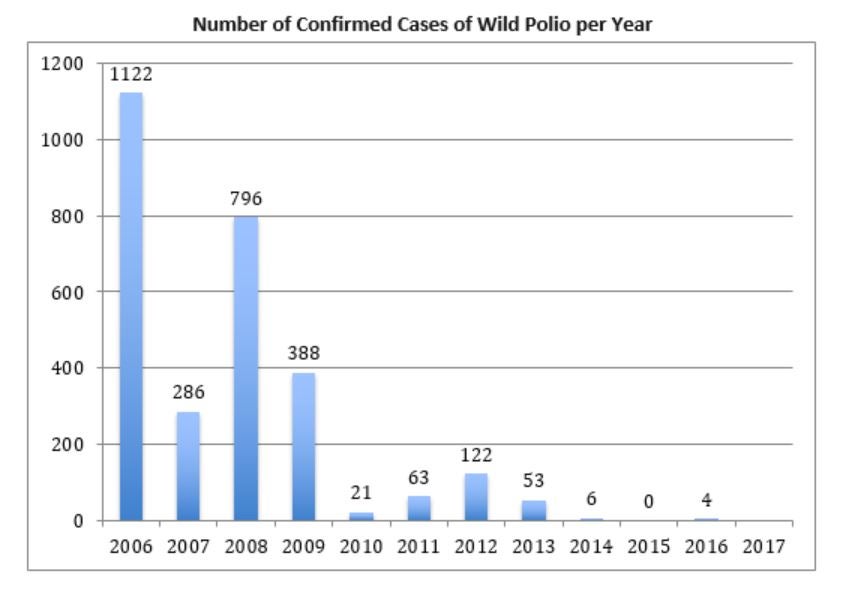 Response: The government’s response to the 2016 outbreak in Boko Haram-affected LGAs in Borno was swift and well-coordinated. The Minister of Health declared a public health emergency, and a multi-national, Lake Chad Basin Polio Task team—comprising Nigeria, Cameroon, Chad and Niger—was formed to coordinate its response.

Part of this response was a form of strategic stabilization; between January and December 2016, a mixture of civilians and a Nigerian Joint Military Task Force reduced the proportion of rural settlements that had been inaccessible to the Health Ministry from 61% to 39% in Borno State.

The government and its partners used other strategies, too, including:

The use of these techniques resulted in measurable improvements in vaccination coverage. A series of rapid and small sample household surveys based on lot quality assurance sampling (LQAS) demonstrated that more than 80% of the LGAs in Borno and Yobe states achieved greater than 80% polio coverage in 2016.

The disease surveillance system has also improved. The number of reported Acute Flaccid Paralysis  cases (that could be polio) increased by 71% and 46% between 2016 and 2015 in Borno and Yobe states respectively. Environmental sampling testing for the presence of wild polio virus has also demonstrated significantly less circulating polio virus.

In late 2015, the Government of Nigeria requested additional financing of US$125 million to support the polio eradication campaign. It was approved in less than 6 months and came at a critical time. Funds earmarked for procuring vaccine for 2017/2018 were used on an emergency basis to buy oral polio vaccine for the outbreak. If Bank funds had not been available, vaccines would have been nearly completely out of stock in Quarter 1 of 2017. This would have had a dreadful impact on the outbreak response and would have also impeded routine immunization.

Lessons can be learned for other conflict-affected areas and for strengthening the health system: Senior Health Specialist in the Africa Region at the World Bank