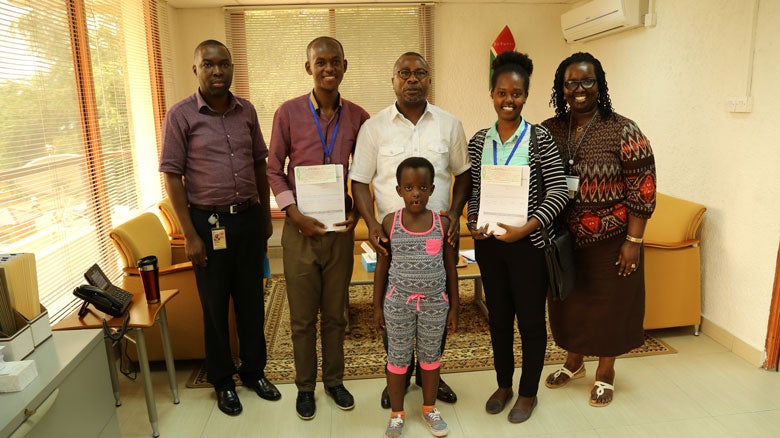 My name is Christian Niyomwungere and I will soon graduate from the University of Burundi. It was there, during my years of study, that I became aware of the issue of unemployment.

I was a newly arrived university student, one day in June 2013, passionate about the field I had just chosen: economics and management. For me, it was a personal, objective choice, although some would have preferred that I study medicine. “In medicine, jobs are guaranteed!” they tried to convince me. Others told me: “Why management? There’s nothing left to manage!”

And I would reply naïvely, or shall we say, confidently: “I will create things to manage!”

But from my first weeks of class, I had begun to observe the scope of the problem. First and foremost, the problem of numbers. We were a class of 473 students. Not to mention the other university students, high school students, and primary school children in the entire country.

In a country measuring barely 28,000 km2, with a continually growing population of whom almost 64% are poor, “Where will all these people end up?” I asked myself.

It is estimated that between 25,000 and 30,000 young Burundians graduate from secondary and higher education every year, whereas the civil service, which is everyone’s dream career, can only accept 8,000 new civil servants per year.

But that wasn’t the most frightening part for me. There was something else. Something that was even more serious in my eyes: the flagrant lack of passion in several of my friends. Where were the CEOs of tomorrow among these young people?

Our elders were, generally, trained to “look for and not create a job” and, hence, they pass on this perspective to us.

Therefore, fostering entrepreneurship requires more than theoretical courses. It also requires a certain environment and frame of mind from childhood.

Entrepreneurship requires passion, determination, and a certain ability to transcend one’s own limitations. And on this subject, a teacher who has never taken the risk of creating a business is likely to be viewed as a proponent of the impossible in students’ eyes.

However, our country has no shortage of audacious individuals who have succeeded! Why not incorporate them into teaching programs and give them the opportunity to share their experiences with students?

We, who are already the product of the education system of “theoreticians” do not persist in blaming the past. The past cannot be changed, but the future can be.

Let us accept our humble beginnings and be determined to grow!

But here also, I was unpleasantly surprised, during the conference on “Promoting investment through bilateral and multilateral cooperation” organized by the investment promotion agency (Agence de promotion des investissements), to observe that very few of the companies present had a website.

The initiatives and proposals for potential solutions are numerous, particularly in agriculture, tourism, exploitation of mineral resources, and construction, in addition to regional integration. Just from consulting the national documentation on employment, the potential is undeniable. As an example, according to the Human Development Report for Burundi, published in 2013 by the United Nations Development Programme (UNDP), when a tourist spends four nights in Burundi, he generates a year’s worth of income.

But above all, let us stimulate entrepreneurship among young people; let us encourage them to pursue their passions. They will create their own jobs, but they will also create jobs for others.

Let us also come to grips with the new driver of the economy: technology! "We, who are already the product of the education system of “theoreticians” do not persist in blaming the past. The past cannot be changed, but the future can be".

I really enjoyed reading this article. Ofcorse, I share the same sentiments. But I just like how you put everything into perspective about youth focusing on entrepreneurship driven by passion.