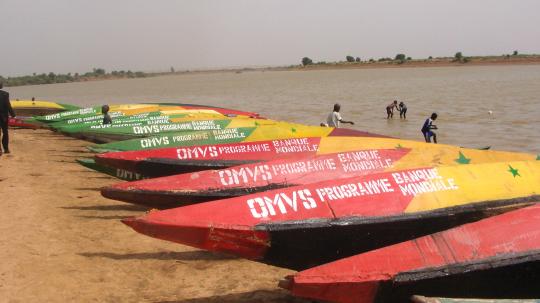 Stretching for more than 1,800 kilometers across Guinea, Mali, Senegal and Mauritania, the Senegal River is the third longest river in Africa. In a region such as the Sahel, which is plagued by drought, poverty, and underdevelopment, access to a water resource such as the Senegal River is critical to local populations who rely on it for energy production, land irrigation, and potable water.

As precipitation projections in the Sahel increasingly forecast drier years, countries in the region look towards this water resource as a means to provide for its people in the years to come, raising the question:  “To whom does this river belong?”

The answer lies in the Senegal River Basin Development Organization (OMVS), a regional cooperative management body of the Senegal River which currently includes Guinea, Mali, Mauritania, and Senegal. Created in 1972, following several years of severe drought, the OMVS is the only African river management entity that has systematically implemented the principle of equitable sharing among member states when it comes to ownership of infrastructure constructed in the river basin or water resource benefits.

For example, 60% of the potable water in Dakar comes from OMVS implemented infrastructure.  This percentage increases to 100% in the cities of Nouakchott (Mauritania) and Saint Louis (Senegal). In addition, infrastructure that has been built and is managed by the OMVS generates 800 GWh per year of clean affordable energy, and provides 375,000 hectares of potential irrigable lands.

Today, the OMVS is a robust regional organization whose financial stability allows it to focus on pursuing technically feasible and politically supported projects agreed upon by its member countries. The OMVS has the full support of its member countries as its regional mission goals of increasing food security, producing energy, reducing poverty, and promoting the free movement of goods and services are in perfect alignment with the policies of its member countries.

Despite geopolitical turmoil in the subregion, the OMVS has always managed to assert its role as a cooperative management organization that facilitates benefits sharing of this important resource to all it members.

In the 1980s, a dynamic partnership was established between the OMVS and the World Bank. The latter contributed in particular to strengthening subregional integration by supporting Guinea’s inclusion. The Bank also supported the modernization and adaptation of OMVS entities and promoted the sustainable management of water resources with the goal of reducing endemic poverty in the basin.

Through programs such as the Senegal River Basin Multi-Purpose Water Resources Development Project (PGIRE), the World Bank has helped the OMVS enhance the development of transboundary waters, cross-border malaria prevention, and the development of hydroelectric generation. Activities during the first phase of the project helped improve communities’ livelihoods through irrigation, fishing development, and agroforestry, helping to create over 18,000 new jobs and boosting considerably the revenue for stakeholders in the fishing and agriculture subsectors.

It is with great pleasure that we welcome the Cooperation in International Waters in Africa (CIWA) program, which will begin operations in the Sahel and West Africa. With its wealth of experience, the CIWA program will support our organization’s efforts in the basin to improve the quality and accessibility of information systems, strengthen institutional management capacities, and share best practices.

The CIWA program will also help promote the cooperative management of transboundary waters and will improve conditions for the populations of the countries sharing these waters. We eagerly look forward to receiving feedback from CIWA to promote knowledge sharing, in particular with respect to the other river basins in Africa.
Topics
Climate Change
Water
Environment
Energy
Governance
Countries
Guinea
Guinea
Mali
Mali
Mauritania
Mauritania
Senegal
Senegal
Regions
Africa
Africa The rivers which pass through more than one country are usually controlled by treaty. Senegal River Basin Development Organization (OMVS) is good example, where World Bank facilitated. The experience may be used by India and Pakistan where Indus Basin Treaty exist between two countries, but still problem continue. Can WB help these countries?