“Sexual Violence is a Weapon of Mass Destruction”

Chemical, biological and nuclear weapons make the list of weapons of mass destruction, but Dr. Denis Mukwege, a gynecologist in the Democratic Republic of the Congo (DRC) and one of this year’s Nobel Peace Prize nominees, wants to add one more: sexual violence. Every year, Panzi Hospital, which he founded in 2008 in the strife-torn Kivu Province in eastern DR Congo, treats 3,000 survivors of sexual violence. Then, through the Panzi Foundation, Dr. Mukwege works with equal fervor to reintegrate them into society. As part of our profile of news makers, we caught up with Dr. Mukwege while he was visiting the World Bank to speak at a seminar on the sexual violence in Kivu Province. “The Man Who Repairs Women,” the title of Mukwege’s biography by journalist Colette Braeckman, speaks about his fight. 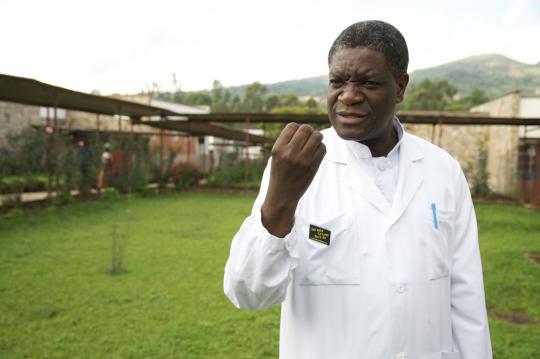 During this seminar, we heard again that Africa’s economy rests on the shoulders of its women. However, if they are broken, physically or psychologically, this perpetuates the cycle of poverty. Why, in your view, do the fight against sexual violence and the struggle for economic development go hand in hand?

I do think that women bear Africa’s economic future on their shoulders, because women fight for their children’s education. I took part in a high-level U.N. panel on reparations in DRC. When we interviewed survivors of sexual violence, we noticed that the first thing requested by these women, who had just been subjected to horrific trauma, was that their children be able to go to school. They know that education is a tool to combat poverty. Women also fight to make sure their families have enough to eat. Their struggle is entirely focused on the family. Without a good education, without good nutrition, you’re of no use to the community. If you destroy a woman physically and psychologically, that woman, who has always worked to have her children healthy and go to school, is broken. And with her, an average of six more people are affected. If you want to rebuild Africa, women have to be part of the equation.

This is not feminism on my part; it’s simply recognizing that women are the backbone of society. This is why we try to give women the means to take charge of their lives. The effect expands in a circle around them, because they will bring in other women. When it comes to community movements, women are a century ahead of men. Women in villages also set up informal banking systems. Women are actors in development, and they fight for human rights. I’ve seen survivors who came to us in Panzi after learning to read, write and count, who start with a tiny savings of $30 and come back later to tell me they managed to buy a parcel of land for $1,000.

You recently launched the program “A Roof for Survivors” whose objective is to give women who have survived sexual violence the material and resources with which to build their own homes. Can you speak to us about the importance of this program?

When a woman has her own home, she has autonomy. In a society where all property belongs to men, even if a woman takes part in the economy, she is not considered a full-fledged actor. It’s as though her labor is credited to her husband. Once a woman builds her own house, her husband can come there, but he no longer controls her. A woman who starts with $30 in savings and manages to buy a plot of land represents potential that should be encouraged. A society’s success can be built on women, because their vision is from the standpoint of community.

How can the World Bank help you concretely in your day-to-day work toward this goal?

I would like the World Bank to help us replicate the Panzi model everywhere that sexual violence has been used as a strategy of war and a weapon of mass destruction, and to work to integrate mental health treatment into basic health care. I hope the World Bank and the Congo government can come together and agree to establish this plan. The World Bank can also be of help in demobilizing former combatants. These people must absolutely not go back into the army, because many of them have been psychologically ruined. They are strong men, they can be of use repairing roads, health centers and schools, they can form agricultural brigades and their crops can be sold on the market to benefit community development. We need health centers that integrate this aspect of mental health into their treatment. The Congo’s experience can be of use as an example. One cannot change society for the better if the society is sick.