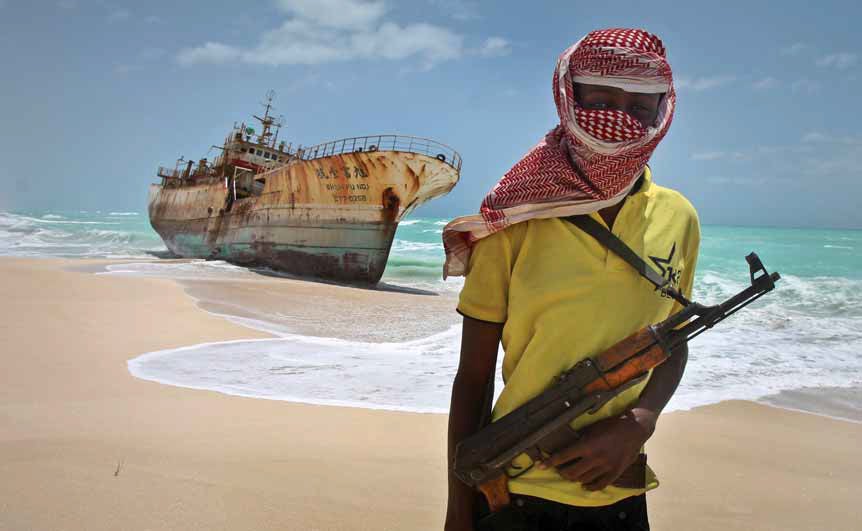 Ninety minutes after leaving Nairobi, UN flight 13W banks sharply over the Somali coastline in a series of steep turns that line it up for final approach into Mogadishu airport. The sharp turns are standard security measures to minimize exposure to fire from would-be attackers on the ground. Out of the starboard window, a number of small boats cut a slow, languid path through the ocean, while closer to the airport, large merchant ships sit anchored just off the end of the runway waiting to be unloaded in the nearby port which is the city’s economic lifeline. As we land, the tarmac shimmers in the 100 degree heat that now envelopes the city.

We’ve come to Mogadishu to present the findings of a new Bank study called The Pirates of Somalia: Ending the Threat: Rebuilding a Nation to senior ministers from the Somali government. The report concludes that Somalia cannot ‘buy’ its way out of piracy, and neither can the international community rely solely on its navies and law enforcement agencies to defeat the pirates, whether at sea or on land. The solution to Somali piracy is first and foremost political.

In a fresh look at ending piracy off the Horn of Africa, the Bank suggests that a sustained solution to ending piracy will only come with the recreation of a viable Somali state that can deliver essential health, education, nutrition, and other services throughout the entire country, especially in those areas where piracy flourishes.

In his presentation to the Somali Ministers and by now a room of 60 Somali journalists, World Bank lead author and Senior Economist, Dr. Quy-Toan Do says that piracy off the Horn of Africa costs the global economy roughly US$18 billion a year in increased trade costs— an amount that dwarfs the estimated US$53 million average annual ransom paid since 2005.

Not only has piracy imposed a hidden tax on world trade generally, it has severely affected the economic activities of neighboring countries. Since 2006 East African countries have seen a marked decline in tourist arrivals and fishing yields. In the booming tourism sector, spending in East Africa since the surge in pirate activities has grown 25 percent more slowly than in other sub-Saharan African countries. Somalia itself has also suffered considerably from the impact of piracy. Increased trade costs are estimated to cost the country US$6 million annually; and this figure does not take into account that Somalia cannot develop and expand its maritime trade and fisheries as long as pirates are allowed to operate in its waters.

As the World Bank’s Country Director for Somalia, Bella Bird has been a frequent visitor to Mogadishu over the 18 months. She and her team are now working on a new interim strategy note which will guide the evolving Bank’s development program here over the next 2-3 years. Bird suggests to the Somali ministers and journalists that the new piracy report is part of the Bank’s commitment to helping Somalia get back on its feet and rebuild; and that there are reasons for guarded optimism that Somalia may finally have an opportunity to move forward.

She notes that the election of President Hassan Sheikh in August last year and the formation of the government have revived hopes in the country’s ability to move from fragility towards sustainable stability and improved governance. For the first time since the collapse of the Siad Barre regime in 1991, Somalia has a federal government and a provisional constitution.

Promising events in the political sphere have converged with an 18-month period of important military gains in southern Somalia - although these gains are fragile.

Economic activity has revived in Mogadishu, and the return of Somalis living abroad is bringing desperately needed new investment and skills. Some 63,000 expatriate Somalis returned here to live in 2012 alone, according to the UN. Another promising sign is that airline flights to and from the city have gone up with Turkish Airlines now opening a new route to and from the city.

“So right now is a historic time for the country and people of Somalia,” says Bird. “The World Bank has pledged its strong support to the President and the new government. I’ve made this promise to President Mohamud personally on a number of occasions now.”

The Somali Minister for National Resources, Abdirizak Omar Mohamed, thanks Bird and Do for coming to Mogadishu to present their findings and acknowledges that Somali piracy has caused “great pain to Somalia” for the harm done to the rest of East Africa and the global community. The Minister also throws his support behind the report’s main finding that the rebuilding of a viable Somali state is the best long-term solution to ending piracy once and for all. Looking down the table at representatives from the European Union and the Unites States who have joined us for our piracy briefing, Minister Abdirizak Omar makes a pitch for their strong international support in this effort.

The Justice Minister, Abdullahi Abyan Nur, who is also acting Prime Minister today, thanks the Bank for coming to Somalia to talk directly to the government about the report which he describes as now being the definitive source of information on Somali piracy. The Minister says it’s not surprising that after his country’s last 20 years of crisis, during which time Somalis had no functioning government, that piracy had flourished as a result. But the situation now had to end he says and he too looks to the international community for the help Somalia needs to recover from years of paralysis.

The good news this year is that piracy episodes have fallen dramatically. Heavily-armed naval patrols and better security onboard commercial shipping vessels are believed to explain why piracy plunged in 2011 and 2012. However these measures are only effective as long as they stay in force. In the absence of a long-term Somali political solution onshore, the high costs of these countermeasures may simply become too expensive to keep up, and the threat of resurgent piracy will not be far behind.

At the end of the day, the pirates are poor, unemployed young Somali men who take to their boats on the open seas because they have no other prospects to earn a living. 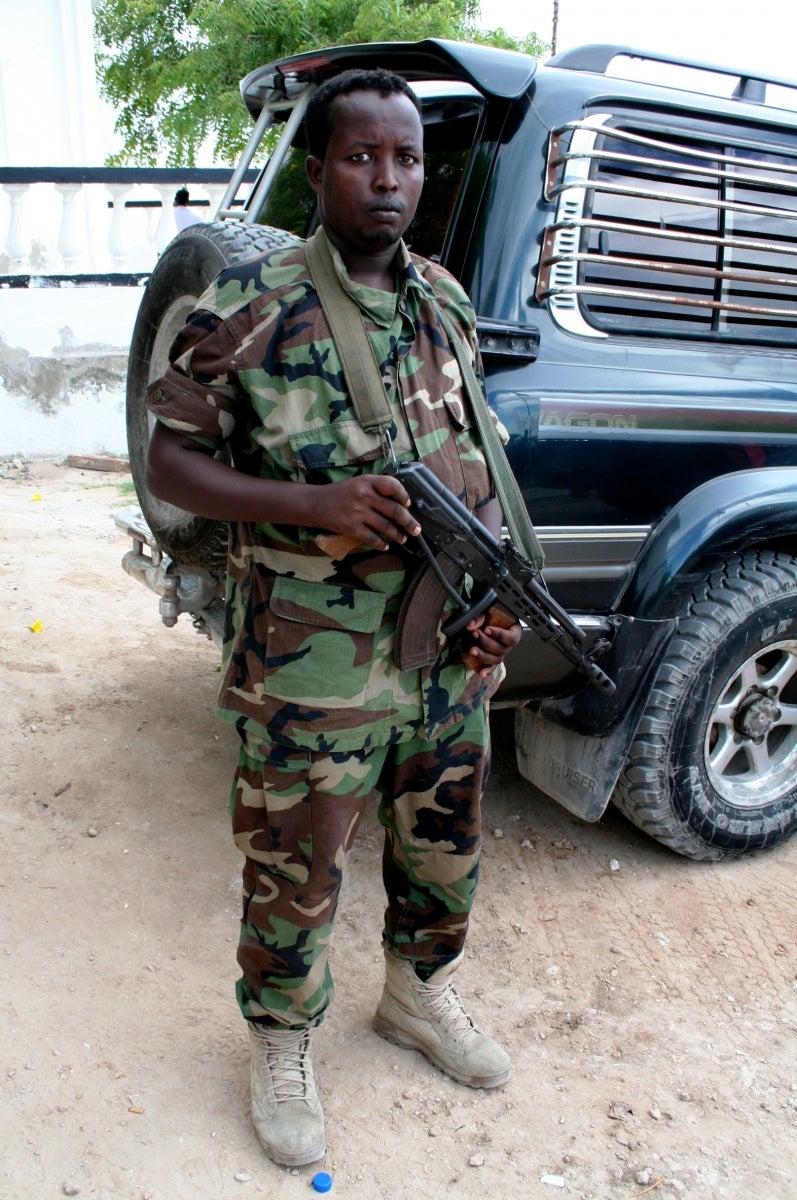 Mogadishu and the international community a much better idea of the development policies and alliances that will be needed to end piracy in these hotspots and to re-establish a thriving new Somali state in East Africa.

By late afternoon, a nearby mosque in Mogadishu calls the faithful to prayers with a loudspeaker announcement that echoes around the blast walls that flank the airport terminal. The heat of the day has given way to an off-shore breeze as we board the UN flight back to Kenya. Just across the Somali border we land in the Kenyan desert town of Wajir where the Kenyan government makes a security sweep of the aircraft looking for weapons, contraband, and illegal immigrants who may have stowed away. It’s a reminder of the high stakes involved for Kenya which has supplied soldiers and other support to the new government in Mogadishu to help keep Al-Shabaab at bay and to give peace a chance.

“I hear things are much better in Somalia now,” a Kenyan customs officer tells me as he X-rays my bags in Wajir. “It’s time to bring our Kenyan soldiers back home now that it’s more peaceful.”

I certainly hope so I tell him before boarding the flight back to Nairobi’s Jomo Kenyatta airport.

But two days later, a series of car bombs kill dozens of people in Mogadishu for which Al Shabaab claims responsibility.

Many Somalis and their next-door neighbors in East Africa will be hoping that the country’s President Hasan Mohamud is right when he says “Our country is moving and will keep moving forward and will not be prevented to achieve the ultimate noble goal of a peaceful and stable Somalia by a few desperate terrorists.” I think its time to surpport somalia to eastablish proper goverment structure that will address the internal and external issues that effect the country and Global partners so that the country can learn from the western countries way of goverment .

Somalia is on the road to recovery after several reforms into the Government and its financial institutions have been made. The poverty rates has dropped since the stabilisation of the federal government have been put into place and this goes to show how to government transformed