Mamadou Faye was patiently waiting for us at the edge of his field when we arrived early evening at Pointe-Sarene, about 100 kilometers south of Dakar. His pointed hat shaded his face, and I feared he was upset given that we were arriving later than scheduled due to difficult roads conditions. But as I strode towards him, he tilted his hat back and revealed a big smile, reaching out his hand to shake mine.

In the light of a waning sun, Mamadou proudly showed me his healthy stalks of sorghum, a local variety of grain. As they swayed in the evening breeze, he explained how these certified sorghum seeds saved his livelihood. Before planting sorghum, he used to plant maize. However irregular rainfall and poor seed quality produced paltry yields and low revenue. When he signed a contract with a cooperative run by Senegal’s Pastoral and Farmers Organizations' Network (Réseau des organisations paysannes et pastorales du Sénégal  or RESOPP), he was provided with seeds of new varieties of sorghum developed by the West Africa Agricultural Productivity Program (WAAPP). These seeds promised to be drought resistant and have shorter cycles. According to Mamadou, they kept their promise.

“I work from 7am to 6pm in this field every day, fighting off monkeys and birds to save my crops because the sorghum is worth it. It’s an advantageous crop for me. If I had more land, I would definitely plant more,” explained Mr. Faye.


Under the seed production contract, Mamadou is bound to sell the sorghum seeds back to the cooperative for 300 FCFA the kilo, a price higher than that of the market (150 FCA). According to the local WAAPP agricultural advisor, Diegane Faye, farmers using these WAAPP certified seeds obtained a yield of 1.5 to 2 tons per hectare against 0.5 ton per hectare from local non-certified varieties. With the region receiving half the normal amount of rainfall (250mm instead of the usual 500mm) for this past harvest (2014), the aforementioned yield is remarkable – and lifesaving.

With agriculture becoming an increasingly risky business in Senegal and many other Sub-Saharan African countries, there is an urgent need to protect farmers from the ever increasing risks linked to weather variability, pests, diseases, drought, inundation, frost, hurricanes, and more. These environmental risks not only have a severe impact on agricultural households, but also impact the economy as a whole, as evidenced by the graph below. In Senegal for example, erratic, insufficient or late rainy seasons observed in 2002, 2006, 2007 and 2011 resulted in a subsequent decrease in agricultural and economic growth. 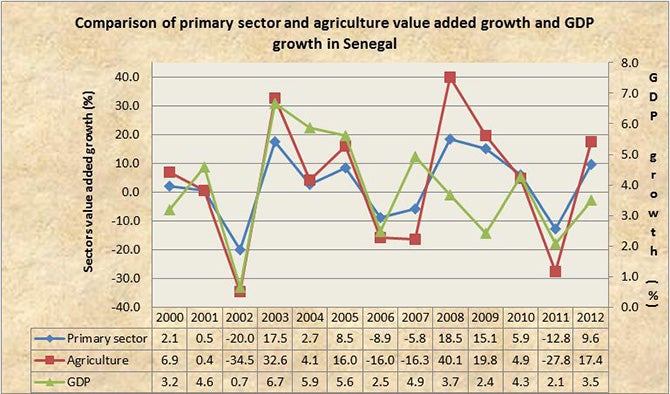 Given these conditions, the World Bank’s WAAPP program is developing and implementing climate smart agriculture to sustain agricultural growth and subsequently, pave the way for poverty alleviation and economic growth, especially in agricultural-based countries where the correlation is high.

In Senegal alone, WAAPP along with its partners, the Regional Study Center for the Improvement of Drought Adaptation (known by the French acronym CERAAS)  and the Senegalese Agricultural Research Institute (ISRA), have developed seven new high-yielding, early-maturing, drought resistant varieties of sorghum (4) and millet (3). Released in 2012, these varieties are now being largely diffused to farmers - Mamadou Faye being one of them - and are resulting in positive yields. An early maturing variety of sorghum with a high sugar content stalk is set to be released this year.

With these improved varieties, farmers are achieving high yields even during years where there is a rainfall deficit such as 2011 and 2014. These varieties are helping famers build resilience to climate shocks and protect them against the negative consequences of crop failure that they were previously exposed to.

For me, each field visit confirms the importance and the impact of the work the WAAPP is carrying out. Our next challenge will now be the speed at which we can scale up the diffusion and the adoption of these improved varieties. My hopes are that the program can get thousands of farmers like Mamadou to benefit from certified seeds, providing a major boost to agricultural production and driving sustainable pro-poor growth in my home country. I am interested in Agriculture, especially the WAAP. I am an Liberian living in the states, really want to move back home and get into farming. This something my grandmother use to do. My sister and I have a huge amount of farming land. This is an opportunity to develop the village and provide jobs for the community. Can someone please reach out to me and help. Thanks