The 2018 Atlas of Sustainable Development Goals: an all-new visual guide to data and development

“The World Bank is one of the world’s largest producers of development data and research. But our responsibility does not stop with making these global public goods available; we need to make them understandable to a general audience.

When both the public and policy makers share an evidence-based view of the world, real advances in social and economic development, such as achieving the Sustainable Development Goals (SDGs), become possible.” - Shanta Devarajan

We’re pleased to release the 2018 Atlas of Sustainable Development Goals. With over 180 maps and charts, the new publication shows the progress societies are making towards the 17 SDGs.

It’s filled with annotated data visualizations, which can be reproducibly built from source code and data. You can view the SDG Atlas online, download the PDF publication (30Mb), and access the data and source code behind the figures.

This Atlas would not be possible without the efforts of statisticians and data scientists working in national and international agencies around the world. It is produced in collaboration with the professionals across the World Bank’s data and research groups, and our sectoral global practices.

Trends and analysis for the 17 SDGs

The Atlas draws on World Development Indicators, a database of over 1,400 indicators for more than 220 economies, many going back over 50 years. For example, the chapter on SDG4 includes data from the UNESCO Institute for Statistics on education and its impact around the world.

Throughout the Atlas, data are presented by country, region and income group and often disaggregated by sex, wealth and geography. 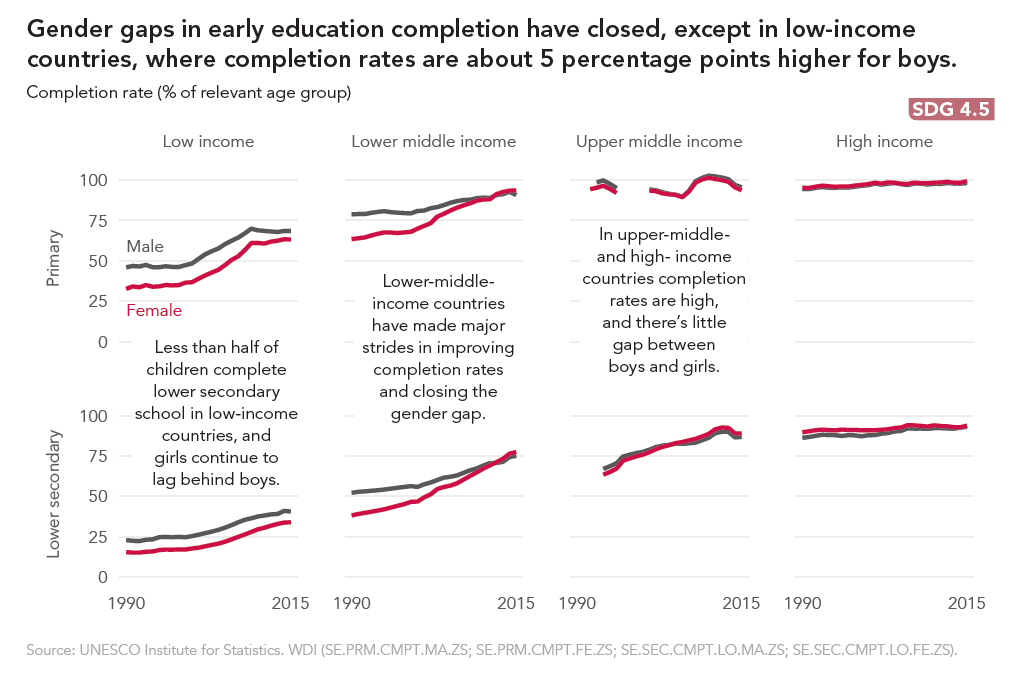 The Atlas also explores new data from scientists and researchers where standards for measuring SDG targets are still being developed. For example, the chapter on SDG14 features research led by Global Fishing Watch, published this year in Science. Their team has tracked over 70,000 industrial fishing vessels from 2012 to 2016, processed 22 billion automatic identification system messages to map and quantify fishing around the world. 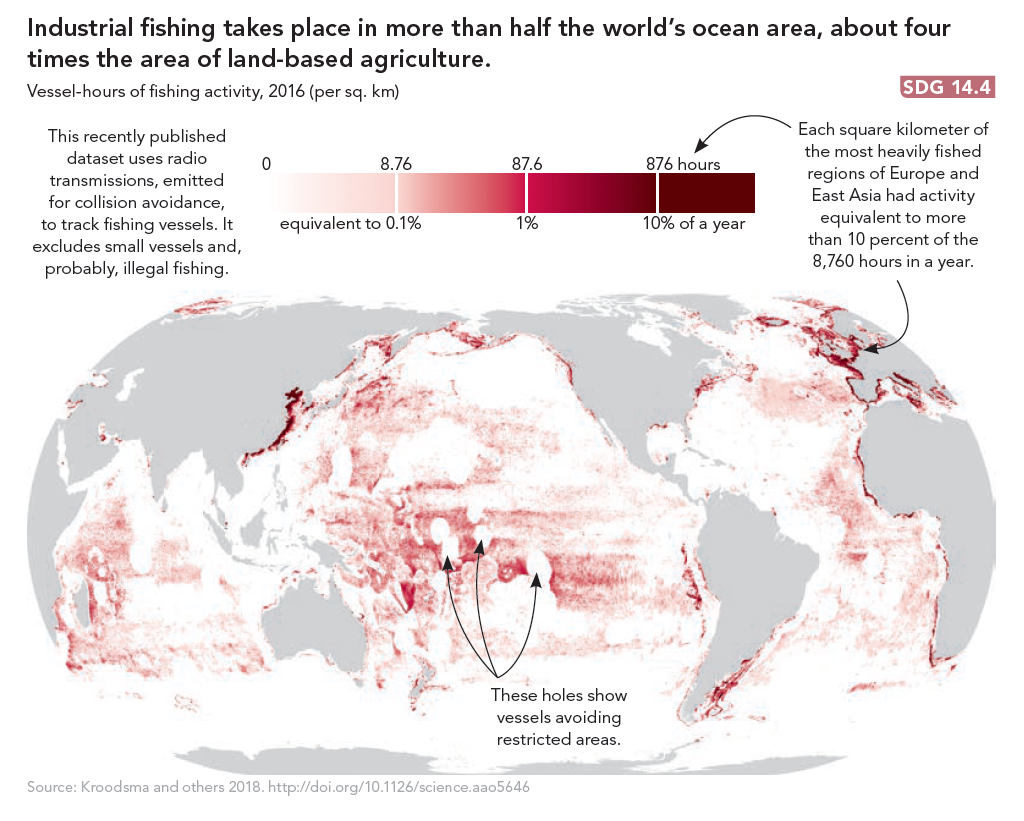 In addition to trends, the Atlas discusses measurement issues. For example new, more granular definitions of access to water and sanitation presented in SDG6 show that while almost 90 percent of the world has access to “at least basic” water - only 71 percent of access water that’s considered “safely managed”, being both readily available and free from contamination. 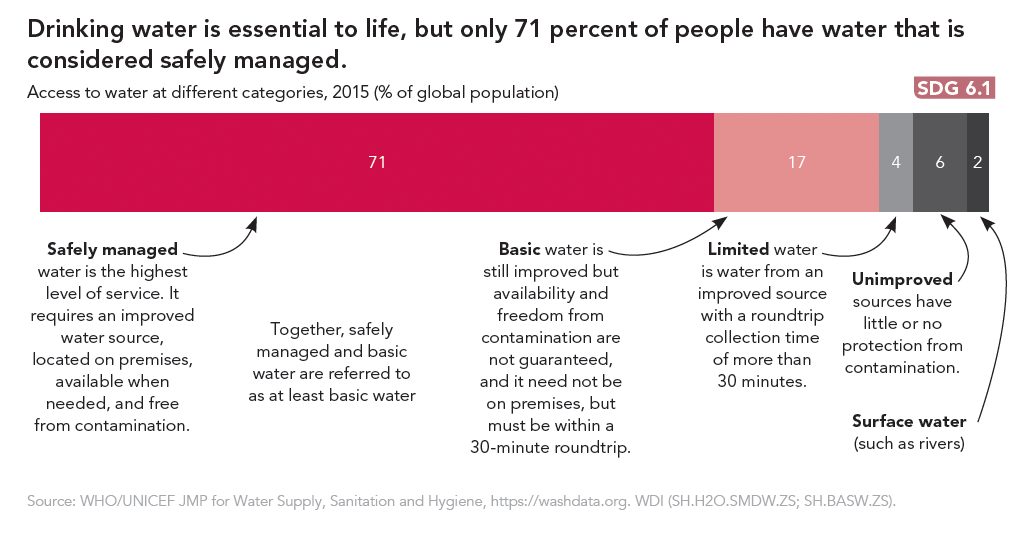 In SDG8, new data from the Global Findex Database shows that 69 percent of adults around the world have an account at a financial institution or with a mobile money provider. But some 1.7 billion people still lack an account, and access to accounts varies widely by region, and by age, education, sex and wealth. 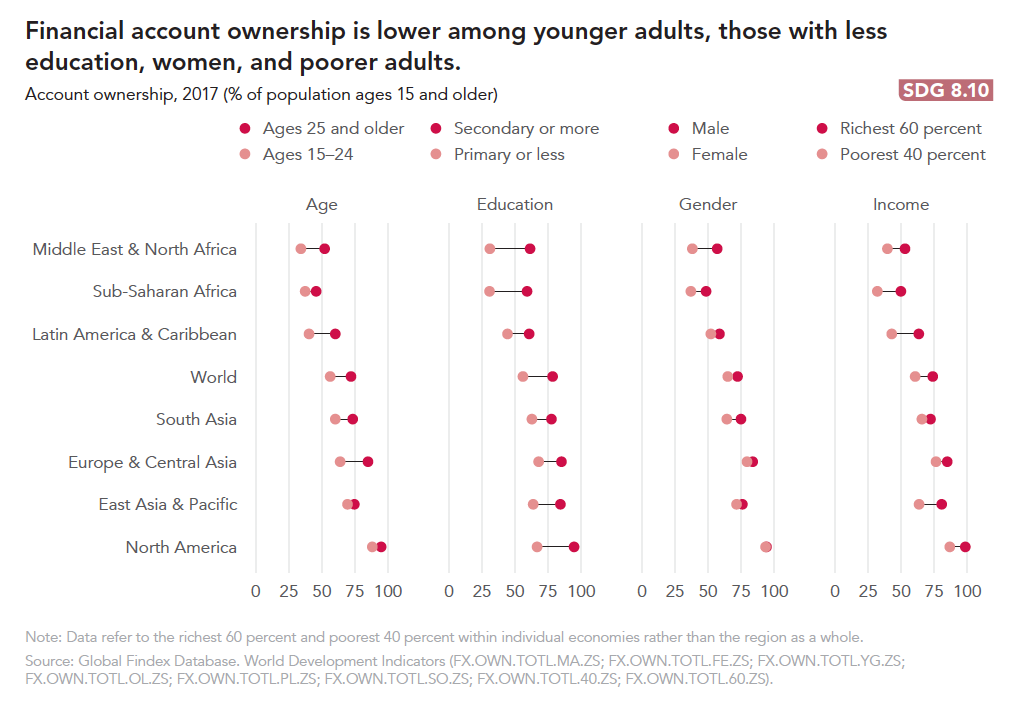 SDG3  features recently released data on Universal Health Coverage which shows that globally, in 2010, over 800 million people spent more than 10 percent of their household budgets on healthcare. The majority of the Atlas is produced using the statistical programming language R and the ggplot graphics library. The code used to produce each graphic is available on github and you can view source code for individual figures such as the one below.

Working this way helps users to understand how a particular figure was derived, what transformations were made to the data and with what assumptions. It also allows figures to be easily maintained and updated, and for others to take our code and data and adapt it to their needs.

Much of the data comes from the World Bank Data API, and a snapshot of the API data used in the publication, as well as data from other sources is included in the Bank’s Data Catalog.

Stay tuned for a separate blog post on what the team learned by setting out to make a fully reproducible publication, and how we’ve addressed the challenges inherent to the process.

Would like to use the open data in my teaching and research.
Raaz
Department of Mathematics
Uppsala University
Uppsala Sweden

it's good to focus on suistanability in our country and I will be very happy to participate in this activities.

I want to know much about sustainability of my country Nigeria.

You may know more about sustainability by checking UN-Related Private Sector Organizations such as CSR-IN-ACTION. You may also get access to first hand data from organisation like BudgIT.

Great article. Putting the SDG numbers into topics that can be worked on is a great way to organize work crews...

Amazing and important work making data understandable and usable in such brilliant and cool graphs. Thanks.

Thanks for all the information. I and some of my colleagues are currently working on SDG8.

Great work which will help us to do rigorous analysis. The Bank move to be a knowledge Bank has added significant value and credibility than the skeptics of lending.

Thanks for the Atlas. I use it for my MBA II Year required course on Environmental Management and Sustainable Development.

Thanks for issuing the Atlas which is very valuable to monitor SD and increases the transparency of the promises, actions and impacts

The data was very understandable. And very educative.Its an eye opener to what is going on around the world.

Amazing information ! Thank you very much for sharing these with us :-)

This information renders the opportunities that can be explored for economic growth and development more realistic.

Great analysis from the maps for better projections. If well exploited will bring great outcomes!

Thanks for the information