Developers, analysts and researchers often use our data through the APIs we provide. We’ve written about accessing World Bank data in Stata in the past, but I’m going to take a moment to survey the other language-specific libraries that I know of. From now on, unless I state otherwise, by “API”, I’m referring to our development indicators API.

I’ll list the libraries first, and then show some examples with a couple of them:

In case you’re not familiar with them, Python and Ruby are popular general-purpose programming languages, and Stata and R are programming environments optimised for statistics. They’re all widely used in the business and academic worlds, and the modules above help users working with those languages to connect to the World Bank Development Indicators API and access our latest data.

What are these modules doing?

Our indicators API provides a RESTful interface onto our data, and it supports basic querying using selection parameters. The API calls return data or metadata in either XML or JSON formats. All the modules above are “wrappers” for this simple interface. They provide language-specific functions for the searching and querying our API supports, and in some cases, the modules load our data into specific data structures the languages support - DataFrames in the case of R and both dicts and pandas DataFrames in the case of Python.

You can read more about our APIs in the developer documentation. I’ll write more about the APIs another time, for now, let’s try out some of these modules.

The wbdata module has very good documentation. As it’s on PyPi, assuming you already have a Python environment set up, you can just install it with “pip install wbdata”.

Now we’re ready to grab some data and plot it. I want to see how the GNI per capita of Chile, Hungary and Uruguay has changed over time. I’ll include some code and explanation below but you can see the whole thing more easily in this IPython Notebook.
Python + wbdata + matplotlib

Which runs and produces this plot: 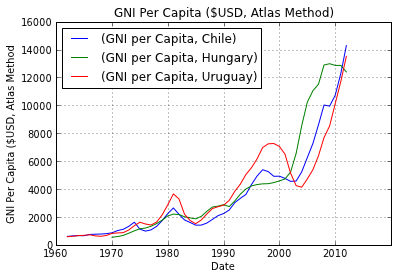 This is just a simple example, but once your data are in the pandas DataFrame (“df” above) you can subject them to any analyses and transformations that you can think of.

As an aside, if you’re a Python user and haven’t tried IPython and notebooks yet, you really should! I find it’s a great way to share code, analysis and results, and plan to use it much more as a communications tool in the future.

OK, let’s do the same thing with R. Fortunately, it’s even easier. To install the WDI module, just run “install.packages('WDI')” from the R prompt. Again you should read the documentation on github for information on how to search and filter for data but since we want the same as above, the code to get the data and produce the plot is:

Which runs and produces this plot: 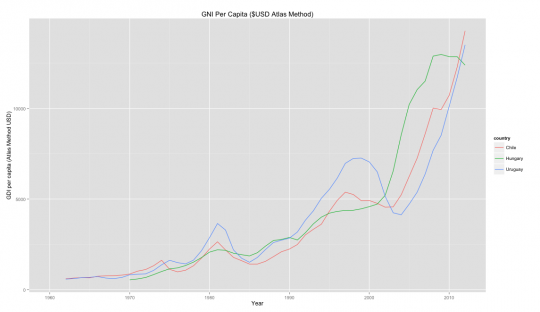 Again, this is just a simple example using the default options, but once your data are in R, there’s a world of analysis you can do, but I’ll leave that for now.

Plotting with Ruby and Stata

I won’t do the same examples with Ruby and Stata, largely because they’re pretty similar, I’ve never plotted a chart in Ruby(!), and I don’t have Stata installed on my machine. You should be able to figure it out from the documentation above. If not - leave a comment or give  @worldbankdata  a shout and we’ll see what we can do.

Getting data in other languages

If you’re not using any of the languages above (we don’t have as many libraries as treasury.io...) it’s still pretty easy to use the raw API calls listed above and then deal with the JSON or XML you get back. I’ll do a little tour of the API from this perspective in the future, but for now, the documentation should get you started.

I hope you found this to be a useful intro. If you know of any other libraries that connect to our APIs, let me know, and if you have any other thoughts, leave them in the comments!

I need some data from world bank for learing data mining!

Hi,
Thanks for the post and the nod! FYI, I ported my R package to python and it is now integrated directly in the Pandas library as an I/O module. Examples are in the Pandas docs:
http://pandas.pydata.org/pandas-docs/dev/remote_data.html#world-bank
Best,
Vincent Arel-Bundock

Accessing the world bank data in APIS in python, ruby and state.You have really helped the developers,analyst and reserchers. Most of them use your data through APIS thanks for that great support.

I downloaded the wbdata package from the Python site and installed. When I do import wbdata in Python it says there is no such module. I tried using conda from Continuum Analytics to install directly and still it says no such package exists. . .any ideas?

On the first point, it sounds like an installation problem with the Python distribution you're using. I've found it most reliable to install packages with pip, ideally in a virtualenv for the project you're working on. So "pip install wbdata" from the command line should make sure the package is installed and available for use.
As an alternative, if you get the latest version of Pandas, you can use the built in wb io functions instead. Good luck!

Hey, is it possible to import data such as remittances into R as well which do not directly belong to the WDI database?
http://econ.worldbank.org/WBSITE/EXTERNAL/EXTDEC/EXTDECPROSPECTS/0,,con…

As far as I know, the only things that the WDI R package can import are the indicators from databases listed in the sources at: http://api.worldbank.org/sources/.
Unfortunately, these data aren't currently available via another API. You can just download and re-format the data as a CSV and read it in, or try the gdata package which generally does a good job importing Excel files.

Hello world!
I'm trying to recreate this in STATA, but unfortunately I'm not yet too well versed in coding (hopefully that will change soon). Can anyone post the STATA script for this?
Thanks!
- Louis

Hi
Could you please add an example of how to access your data using SDMX. As far as I know, the World Bank supports this standard. OECD already provides SDMX links to their data sources, so it is easy to remotely grab the information. I see I can uses the above R package, but I think we should migrate to an open standard as soon as possible.
Best,
Pascal

Nice post. The information you provide was really useful. Keep sharing this information.