How do the 2017 PPPs change our understanding of global and regional poverty?

In May 2020, the International Comparison Program (ICP) published new purchasing power parities (PPPs) for the 2017 reference year. PPPs are the principal data used in the measurement of global poverty to convert household income or consumption expenditure into a common currency, while accounting for price differences across countries.

But how do the new PPPs change our understanding of global and regional poverty profiles?

In general, the 2017 PPPs do not substantially change the regional distribution of people living in extreme poverty.  Table 1 summarizes the main findings for poverty in 2017, the year of the PPP data. Extreme poverty decreases slightly by 0.2 percentage points to 9.1%, reducing the global count of the extreme poor by 15 million.  You may wonder how the international poverty line can increase by a quarter of a dollar and yet the global number of poor can decrease. The reason is that in some poor countries, individuals’ purchasing power has risen marginally.

The limited change in the global poverty count is largely driven by a decline in the number of people living on less than $2.15 a day in Sub-Saharan Africa — a region that still accounts for more than half of the extreme poor in the world. About 62% of the world’s poorest people in 2017 lived in Sub-Saharan Africa as measured with the 2011 PPPs. With the 2017 PPPs, this number will decline slightly to 58%. 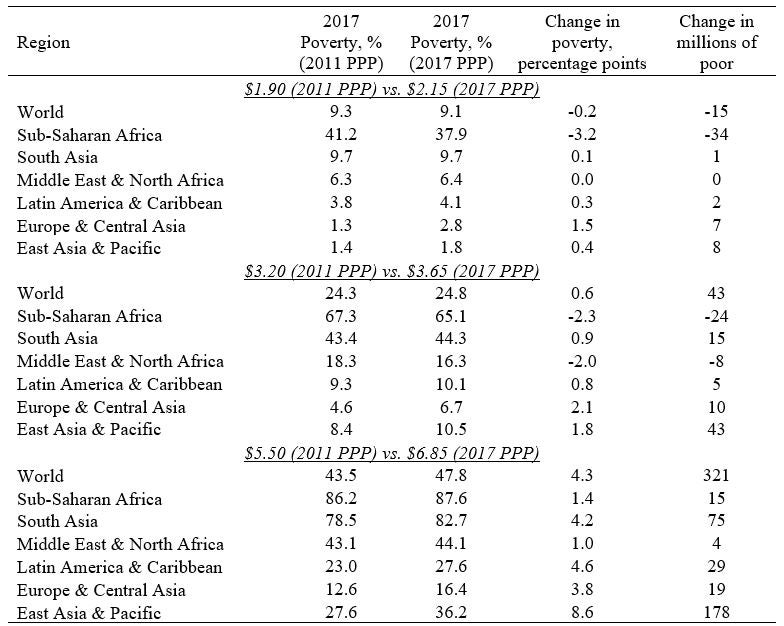 At the $3.20-line (for lower-middle-income countries), poverty increases at the global level by 0.6 percentage points, or by 43 million poor people. This change at the global level hides offsetting changes at the regional level: Poverty increases in East Asia and Pacific, Europe and Central Asia, Latin America and the Caribbean, and South Asia, while poverty decreases in the Middle East and North Africa and Sub-Saharan Africa.

When applied retroactively, the 2017 PPPs slightly increase historical estimates of extreme poverty and slightly decrease extreme poverty since 2014.  But the general pattern of a rapid decline in global extreme poverty over the past decades with a slowdown in recent years remains very much the same. Figure 1 shows the changes in global and regional poverty trends at all three global poverty lines.

Figure 1: Changes in global and regional poverty trends with the 2017 PPPs

Our analysis suggests that the 2017 PPPs do not significantly alter our understanding of the historical trends and regional breakdown of extreme poverty. Whether 2011 PPPs or 2017 PPPs are used, global poverty has decreased substantially since 1990, extreme poverty is increasingly becoming concentrated in Sub-Saharan Africa, and just below 700 million people lived in extreme poverty in 2017.