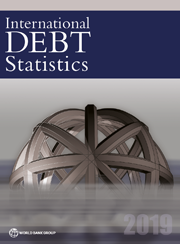 The 2019 edition of International Debt Statistics (IDS) has just been published.
International Debt Statistics 2019 presents statistics and analysis on the external debt and financial flows (debt and equity) for the world's economies for 2017. This publication provides more than 200 time series indicators from 1970 to 2017 for most reporting countries. To access the report and related products you can:

This year's edition is released just 10 months after the 2017 reference period, making comprehensive debt statistics available faster than ever before. It presents comprehensive stock and flow data for individual countries and for regional and analytical groupings.

In addition to the data published in multiple formats online, IDS includes a concise analysis of the global debt landscape, which will be expanded on in a series of Debt Bulletin over the next year.

These data are produced as part of the World Bank's own work to monitor the creditworthiness of its clients and are widely used by others for analytical and operational purposes. Recurrent debt crises, including the global financial crisis of 2008, highlight the importance of measuring and monitoring external debt stocks and flows, and managing them sustainably. Here are few highlights from the analysis presented in IDS 2019:

Net financial inflows (borrowing and equity) to low- and middle-income countries rose 61 percent in 2017 to the highest level in three years, driven by a rebound in net debt inflows.

Net financial flows climbed to $1.1 trillion in 2017, a level last seen in 2013. The rebound in aggregate net financial flows was driven by net borrowing which rose to $607 billion in 2017 from $181 billion in 2016, surpassing net equity inflows for the first time since 2013.  A sharp rise in both long-term and short-term debt inflows contributed to the increase. Foreign direct equity investment (FDI) inflows, long considered the most stable and resilient component of otherwise volatile financial flows, contracted for the second consecutive year, falling a further 3 percent in 2017.  In contrast, portfolio equity inflows rose to $57 billion, an increase of 29 percent over 2016.

You can look forward to more IDS 2019 content here on the Data Blog over the coming months, and on @worldbankdata on Twitter. If you have any questions related to IDS or our other data products, please visit our Data Helpdesk. thank you for world bank that to fill global community gaps

How can I get data for other graphs in the IDS2019 report? Could you please help me