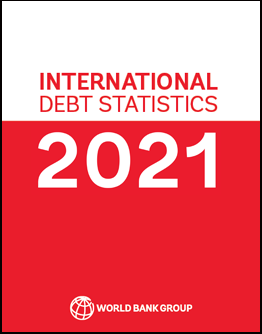 The International Debt Statistics 2021 report, published today, features external debt statistics and analysis for the 120 low- and middle-income countries that report to the World Bank Debt Reporting System (DRS). It is part of a series that supports the World Bank’s broader agenda to promote the comprehensive disclosure of public debt by borrowing countries. It has gone through continuous improvements in data quality, coverage and transparency in its 70-year history.

A year ago, International Debt Statistics 2020 provided users with new data on the borrower composition of the external debt obligations of low- and middle-income countries, with information on borrowing disaggregated by public corporations and guarantees provided by governments.

This year, the report presents, for the first time, an expanded data set that provides detailed information on lending by creditor countries and multilateral institutions to low- and middle-income countries, in addition to the disaggregation of countries’ external debt by type of creditor – a long-standing element of the external debt data disseminated by the World Bank.

The external debt stock of countries eligible for the Debt Service Suspension Initiative (DSSI) endorsed in April by the G20 climbed to $744 billion, nearly twice the rate of other low- and middle-income countries, equivalent on average to 33% of their combined GNI. The rise in public and publicly guaranteed long-term external debt of this group of countries over the past decade has doubled (to $523 billion in 2019). Official creditors accounted for the largest share of this debt stock at the end of 2019 (81%). G20 countries accounted for 91% of the bilateral debt of DSSI-eligible countries. China is by far the largest creditor for this group (63% at end-year 2019). In addition, there is fast-growing financing from private creditors (nearly a five-fold increase since end-2010).

Net long-term debt inflows ($353 billion) recorded in 2019 were 13% higher than the previous year, mostly sustained by net bond issuance of $234 billion. Inflows from bondholders rose 30% in 2019. The increase in overall bond issuance in 2019 was accompanied by a shift in borrower composition, with a 5% drop in new issues by sovereigns and public sector borrowers more than offset by a 42% rise in issuance by private sector entities. Inflows from official creditors slowed 17% in 2019. The World Bank (IBRD and IDA) was the mainstay of inflows from official creditors.

The report comes with the IDS-DSSI database, which supplements the International Debt Statistics database, and provides further disaggregation of projected debt service payments for 2020 -2022 presented on an annual and monthly basis. This new set of data sets a standard for greater debt data transparency that will better assist policymakers and analysts in assessing the potential impact of debt service suspension from the DSSI.

Tools to access, explore, and interact with the IDS2020 are available at http://data.worldbank.org/products/ids and include:

The report is welcoming and laudable, but I am eager and wishing to see World Bank to provide a lot of opportunities like debt waiver to poorer countries in order to help them recover from the negative economic impact left by the COVID-19.

kindly provide me with current statistics for Zambia concerning its debt

what exactly is Ghana's debt position?