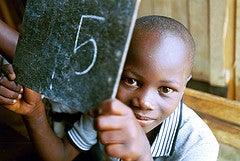 As countries all across Africa recognize International Day of the African Child today, I thought it would be a timely opportunity to blog about the progress of under-five child mortality rates over the past two decades.  But first, some data for us to understand the big picture:
​

As we stand a year away from the Millennium Development Goal (MDG) 4 – which aims to reduce the global under-five child mortality rate by two-thirds between 1990 and 2015 – the pace of reduction would have needed to quadruple in 2013-2015 to achieve this goal, according to the United Nations Children's Fund's (UNICEF's) Committed to Child Survival: A Promised Renewed – Progress Report 2013.

A closer look at regional rates
Now let's take a look at the regional and country level data by viewing the World Development Indicators (WDI) 2014 and the indicator under-five mortality rate. The WDI also features a short progress report on MDG 4, which complements the detailed analysis of the World Bank Group's Global Monitoring Report.  This report uses the same methodology to assess whether countries are on track or off track to meet the 2015 targets.

Sub-Saharan Africa (SSA), where one in ten children die before the age of five, faces the biggest challenges in achieving MDG 4, followed by South Asia.  The SSA region reduced its child mortality rate by 45% during 1990 to 2012, the only region to reduce its under-five mortality rate by less than half during this time.  SSA also lags behind other regions in its pace of decline in the total number of under-five deaths.

Where are the specific areas of progress? Some low-income SSA countries that recorded some of the highest child mortality rates during the early 1990s were able to significantly reduce their under-five mortality rate by two-thirds or more by 2012.  These countries include Malawi (71%), Liberia (70%), Tanzania (68%), and Ethiopia (67%).  What's insightful about their rates of reduction is that even low- income countries have been able to attain very ambitious targets in the MDG timeframe.

Other countries that made significant strides in reducing their children under-five mortality rates include Eritrea (65%), Niger (65%), Rwanda (64%), and Madagascar (63%).

The countries with the ten highest under-five mortality rates in the world are all located in SSA, mostly in West and Central Africa.  Although countries like Niger (65%) and Mali (50%) have made notable progress in reducing their under-five mortality rates, their levels remain drastically higher when compared to the global average.  On the other hand, the Democratic Republic of Congo (15%), Somalia (17%), Angola (23%), Central Africa Republic (25%), Chad (28%), and Sierra Leone (29%) have all made steady progress.

As the below chart shows, Sierra Leone has the world's highest child mortality rate, although the rate has fallen by more than a fifth over the last decade.

By 2050, according to the same UNICEF report, 37% of the world's children under age five will live in SSA and an estimated 40% of all live births will take place in that region.   By developing and launching child health campaigns aimed at providing quality health care, removing barriers to access, and establishing shared responsibility for child survival initiatives, SSA countries can continue to focus on sustaining and deepening their child mortality reduction goals.  Many SSA countries have already applied lessons learned from other regions, which all point to measurable, positive health outcomes.

Ongoing Efforts for More Quality Data
Producing accurate child mortality estimates is a major challenge due to the lack of high quality data for many countries.  Civil registration and vital statistics (CRVS) systems are the preferred source for child mortality data, but most countries with high child mortality rates do not have reliable systems, as noted in Sam Mills's recent blog post.   For these countries, household surveys and censuses are largely used to collect, monitor, and measure child mortality data. There are difficulties, however. Surveys are often infrequent, and subject to measurement error. For example, female respondents are often asked to recall child deaths over a multi-year period preceeding the survey, which can lead to recall bias.  Also, because these are sample surveys, the mortality estimates are with uncertainty intervals.

The UN Inter-Agency Group for Child Mortality Estimation (UN IGME) compiles all available nationally representative data relevant to the estimation of child mortality, including data from vital registration systems, population censuses, household surveys, and sample registration systems. To estimate the under-five mortality trend series for each country, a statistical model is fitted to data points that meet quality standards established by the UN IGME and then used to predict trend lines that are then extrapolated to a common reference year.  More detailed information on child mortality estimates can be found at childmortality.org. These child mortality estimates are also available in the World Development Indicators database and HealthStats, a comprehensive database featuring health, nutrition, and population statistics. Also, the charts used in this post are generated from a set of data dashboards that helps users understand progress towards the MDGs: http://data.worldbank.org/mdgs. Sommercy Heartfelt Foundation based in Nigeria , has done a research on reduction of Martanal mortality and morbidity in Nigeria .