Navigating the independence and relevance of national statistical offices

Imagine living in a country where prices doubled every 16 hours. How could an economy function in such a world where people lost faith in the value of their currency? During a period of hyperinflation in Hungary post-World War II, things got this bad. There were many factors leading to this, but one fact prevented fixing the problem—the Central Bank had no independence. Recognizing the importance of separating politics from monetary policy, there has been a strong push to make central banks independent over the past fifty years. Today, the majority of central banks across all income groups are independent and the notion that central banks ought to have some degree of independence is fairly uncontroversial. Without independence, governments might misuse their power over the money supply, cause disturbing rates of inflation, and damage long-run development outcomes.

A very similar argument can be made with respect to the independence of national statistical offices (NSOs). Whereas central banks control a country’s money supply, NSOs have traditionally controlled a large part of a country’s data supply. As pointed out in the 2021 World Development Report: Data for Better Lives, governments may have a vested interest in curtailing the production and dissemination of reliable data, fearing these could expose poor policy performance, dilute power, and increase public pressure. Without NSO independence, governments may misuse their power over the data supply that underlie official statistics and damage long-run development outcomes.

Despite the similarity of the arguments that can be made for NSO and central bank independence, a global movement towards NSO independence has not gained similar steam. An indicator in the Ibrahim Index of African Governance evaluates NSO independence based on NSOs’ autonomy to collect data of their choosing, their autonomy to publish data without prior clearance or approval from any branch of the government, and the sufficiency of their funding to collect and publish data of their choosing. A quarter of African countries satisfy zero of those conditions and only five countries satisfy more than half. Anecdotes of attacks on NSO independence around the world suggest that fragile NSO independence is not limited to the African continent. For example, Greece’s debt statistics appear to have deliberately misrepresented the country’s financial situation in the lead-up to the 2009 euro crisis.

So why has the movement for the independence of National Statistical Offices been much weaker than the push for central bank independence?  This question was one of the topics covered at a recent NSO-focused World Development Report launch event, as shown below:

Another reason why the movement for NSO independence has been weaker is that total NSO independence often risks reducing the relevance of the office. Achieving relevance for the NSO is harder when it is administratively separated from other parts of the government and does not maintain a close relationship with influential ministries such as the Ministry of Finance or Treasury or the Office of the President. Whereas no government would consider not funding an independent central bank or not using the money it supplies, governments frequently curtail funding to NSOs and refrain from using the data they supply. And without the use of its data, the NSO becomes irrelevant—incapable of informing public debate and policy.

For many NSOs, this creates a trade-off between relevance and independence, or as one prominent head of an NSO put it during interviews for the World Development Report, a struggle on “how to keep an arm’s length from the hand that feeds us.” Yet this trade-off is not inevitable, and a better understanding on the part of decision-makers of the role of high-quality data can break the negative link between the two. Here are three arguments to help foster such an understanding: 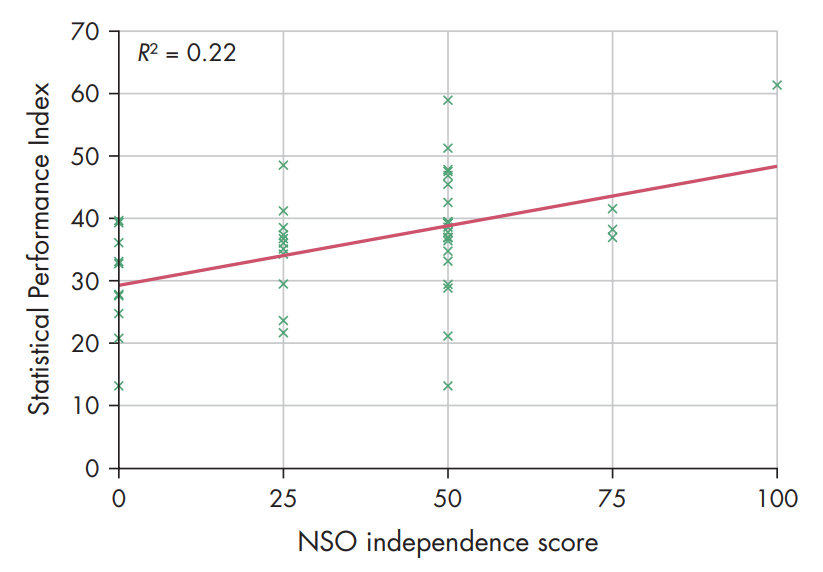 Sources: Ibrahim Index of African Governance, Statistical Performance Indicators.
The data behind the figure can be downloaded here.

Read more about Chapter 2 of the report here.