The International Comparison Program (ICP) released its 2017 purchasing power parity (PPP) exchange rates on May 19th 2020, enabling governments and others to compare the real level of economic activity among countries. In this blog post we demonstrate use of the ICP 2017 data to compare countries’ food prices and expenditures, focusing on the aggregate categories used in the UN system of national accounts. These aggregate PPP levels from ICP 2017 complement research using individual item prices from the last round of ICP 2011 data used to compute least-cost diets for nutrient adequacy (Allen 2017), the relative cost of items from each food group (Headey and Alderman 2019), and the affordability of healthy diets (Hirvonen, Bai, Headey and Masters 2020), as well as other sources of price data used to track diet costs over time (Masters et al. 2018, Dizon, Herforth and Wang 2019).

The ICP was created to assemble local prices for standardized goods and services in all UN member countries, averaging across similar items to construct PPP exchange rates to units of a reference currency that can buy the same quantity of things in each place. The first purpose of these exchange rates is to calculate the overall size of each economy and the number of people in poverty, using PPPs corresponding to each country’s entire Gross Domestic Product (GDP) or all household expenditure. Data from ICP 2017 are, in principle, directly comparable across countries within and between years, with limited differences in the sampling frame and item selection since the previous round in 2011.

In this post we focus on PPPs for specific sectors and categories of food, to compare price levels across countries at different levels of GDP per capita. Figure 1 below shows sectoral aggregate price levels at each level of national household expenditure per capita in 2011 and 2017, for key categories of spending relative to the overall average of all household expenditure. The horizontal line at 1.0 shows local prices in the reference currency, which is purchasing power in the United States. By definition, each line converges to 1.0 for the U.S., whose household expenditure per capita was 34,103 in 2011 and 40,908 in 2017. Since there are few observations at the highest income levels, confidence levels widen or become undefined. The red line in Figure 1 shows that average prices of all food and non-alcoholic beverage items collected by the ICP are higher in poorer countries, relative to the prices of other things in those countries. Relative prices for non-traded services such as housing, health care and education are lower in poorer countries. Data shown are sectoral averages over all items whose prices are collected in the countries at each level of GDP; item definitions are standardized but quality may differ. Lower prices for some items could be explained to lower quality, but the higher price of food in lower-income countries is unlikely to be explained by higher quality.

Figure 1. Average prices by sector, relative to prices for all consumer expenditure 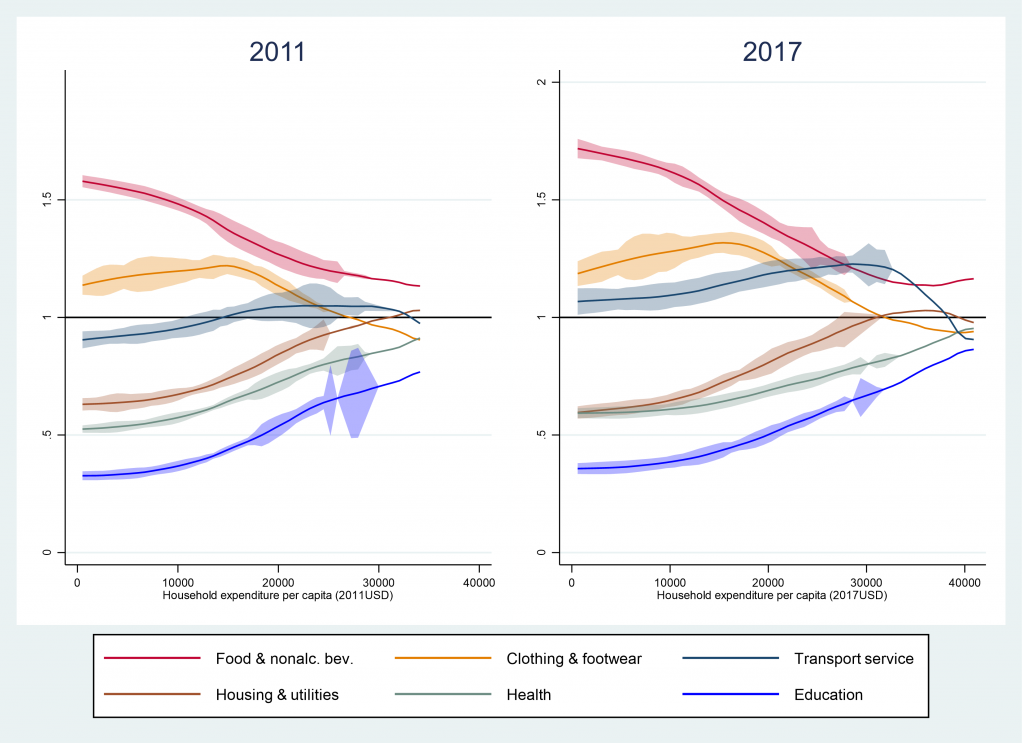 Note: Data shown are countries’ average price for all goods and services in each sector, relative to that country’s average price for goods and services in all household expenditure. Lines show local polynomial regressions that compute a smoothed global mean at each level of GDP per capita, with the 95% confidence interval around that mean. The width of that interval varies with the number of countries at each income level, and is omitted from the 2011 chart due to small sample sizes at the highest income levels. The horizontal line at 1.0 shows relative prices between sectors in the U.S., whose level of GDP per capita was about 50,000 in 2011 and about 60,000 in 2017.

The high price of food in lower-income countries revealed by ICP data is a particularly cruel aspect of the world economy, harming affordability in populations who have no choice but to devote a large fraction of their resources to food.  Figure 1 reveals that this headwind against the poor may have become even steeper from 2011 to 2017, as poor countries lacked the productivity growth needed for lower prices. One particularly interesting finding from Figure 1 is the contrast between average prices for food (shown in red) and clothing (shown in orange). Both are tradable goods whose prices here are measured at retail level, including the non-traded services associated with distribution, stockholding and sale. Both are relatively expensive in low-income countries, but in countries below about USD 15,000 per year in household expenditure per capita, higher income is associated with a higher price for clothing and a lower price for food. One possible explanation is that the quality of clothing being sold in the lowest-income countries is very low, whereas similarly lower-quality food items do not exist. Another explanation could be that productivity of non-traded services in the wholesale and retail sector is worse for food than for clothing at the lowest levels of income, for example due to perishability and bulk.

An important feature of ICP 2017 data is the release of aggregate averages by category of food. These provide exchange rates at which one could buy a given basket of each food group, using categories defined by the UN Classification of Individual Consumption According to Purpose (COICOP). These aggregate averages do not correspond exactly to nutritional food groups, but comparing average prices for a few COICOP categories reveals sharp differences by level of national income as shown in Figure 2. The red line in Figure 2 is identical to the red line in Figure 1, showing the average price of all food and non-alcoholic beverages relative to the price of all goods and services in household expenditure, at each level of GDP. Each of the other lines corresponds to a specific type of food, again priced relative to all goods and services in household expenditure, and again the reference value of 1.0 corresponds to relative prices in the United States.

Figure 2 reveals that dairy and eggs are much more expensive in poorer countries. Headey and Alderman (2019) documented that pattern in the 2011 ICP data using the prices per calorie from individual items, which for this food group is similar to the data shown here which are based on average prices per kilogram in each food category. The higher cost of dairy and eggs in lower-income countries did not improve and may have worsened from 2011 to 2017. The most dramatic change from 2011 to 2017 revealed in Figure 2 is higher relative prices for fish in poorer countries, which had been relatively low-cost in 2011 but was similar to fruits and vegetables in 2017. This could be due to differences in product quality, if the fish prices observed in 2011 include more of the small, dried and salted or other less expensive kinds of fish than were included in the data for 2017. Further research using detailed data on the nutritional value of individual items is needed to control for these quality differences, with other sources of price data used to address issues of item selection.

Figure 2. Average prices by food group, relative to prices for all consumer expenditure 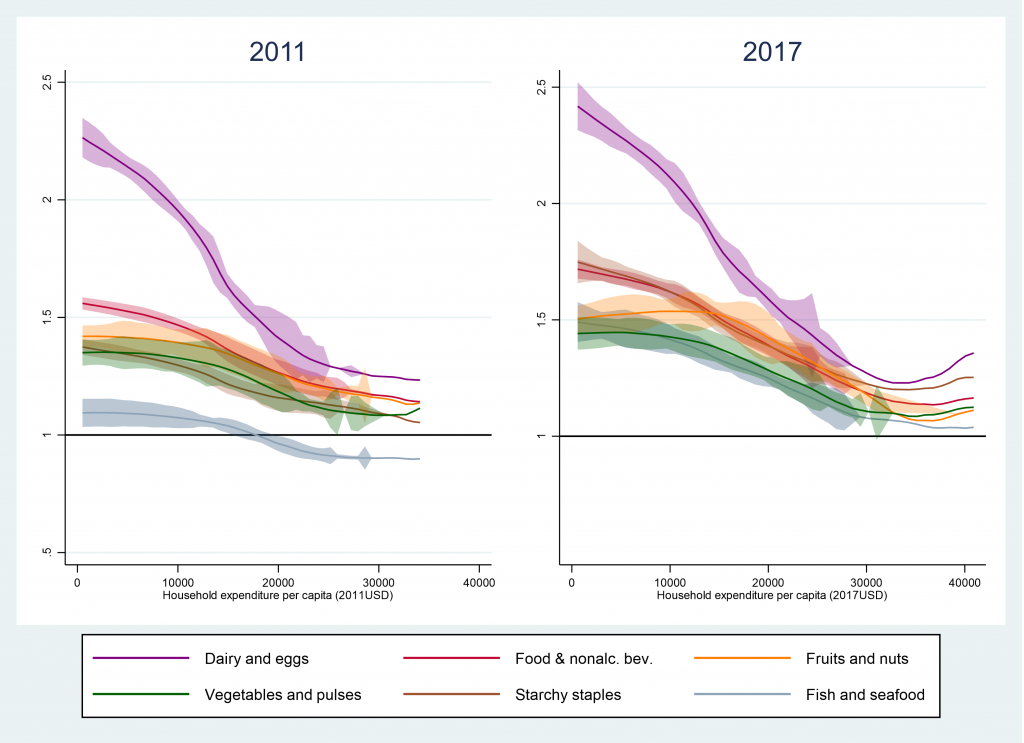 Beyond prices, the ICP 2017 data released on May 19th include each country’s estimated total expenditure by product category. Figures 3 and 4 show these expenditure shares by sector and by category of food. Consumption data from national accounts data include all goods and services used in the public and private sectors, and total expenditure per capita can differ greatly from the average values found in household survey data. Nonetheless, the aggregate expenditure shares shown in Figure 3 clearly follow Engel’s Law by which food accounts for a larger share of total spending at lower income levels, ranging here from above 20% to below 10% of total expenditure in countries’ national accounts. Expenditure shares on education are even higher than food but follow a similar path, whereas housing and health-care expenses account for a similar share of expenditure in the poorest and the richest countries, with a peak at income levels around 20,000 US dollars per year. 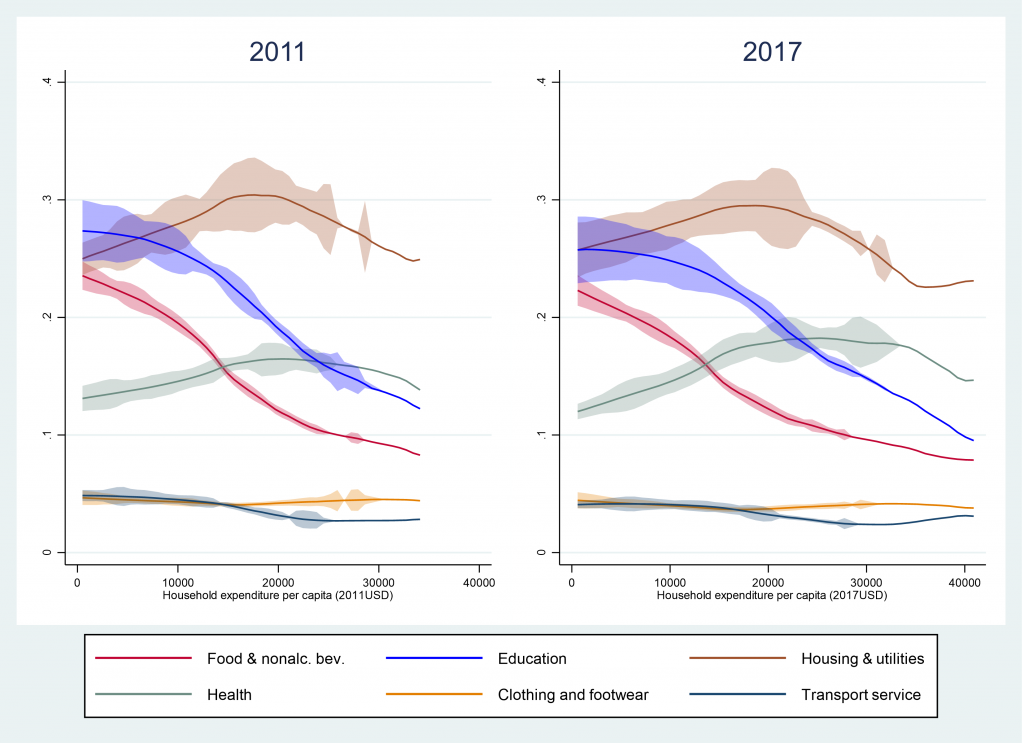 Note: Data shown are each country’s total expenditure in each sector, as a share of all goods and services consumed by households in national accounts. Other information is as for Figure 1.

Expenditure shares by food category are shown in Figure 4. Again, despite being national accounts data rather than survey results, these confirm the pattern known as Bennett’s Law by which starchy staples accounts for larger share of expenditure in lower-income countries. Expenditure on vegetables and pulses shows a similar pattern. In contrast, the expenditure share for meat has an inverted-U pattern, reaching its highest level at levels of GDP around 20,000 US dollars per person per year, other than the few observations of very high-income countries like the United States at the extreme right of this chart. 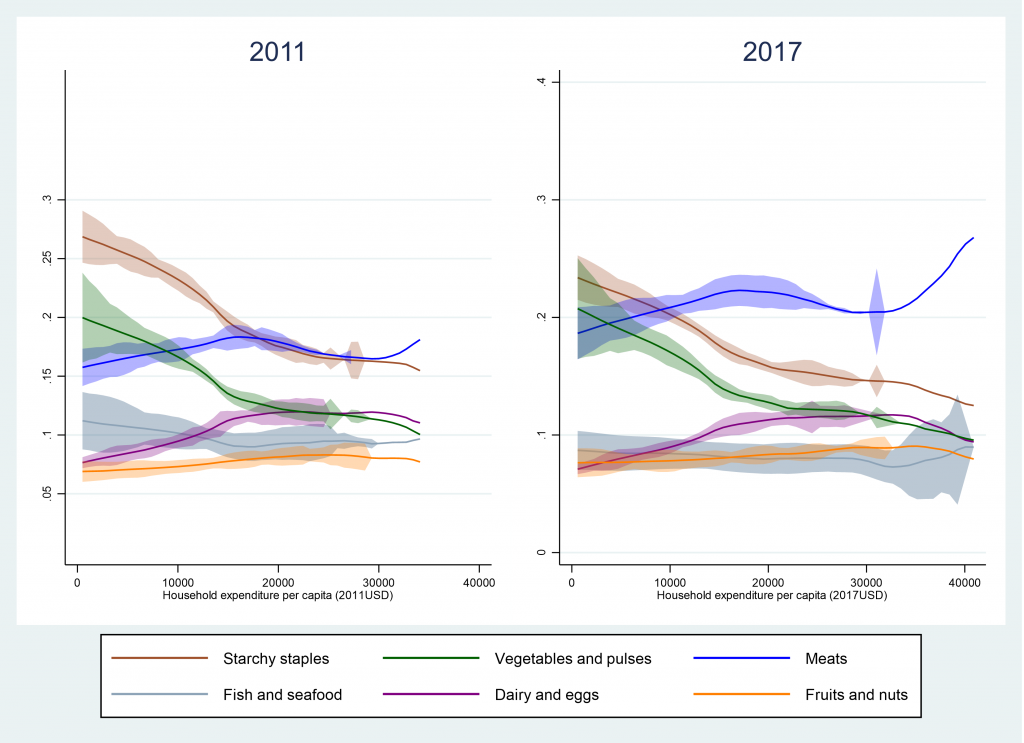 Note: Data shown are each country’s total expenditure in each food category, as a share of all goods and services consumed by households in national accounts. Other information is as for Figure 1.

The aggregate sectoral and food category prices described in this blog post are those publicly posted by the ICP as their primary data product, designed to inform poverty reduction and economic policy around the world. The preliminary analyses shown here reveal clear similarities and differences from 2011 to 2017 in food systems across countries at each income level, pointing to big opportunities for improvement to bring nutritious diets within reach of the poor in all countries. Future work in collaboration with the ICP, international agencies and national governments will use these PPP exchange rates to compare the cost and affordability of nutritious diets, including ongoing collection of new price data to track impacts of COVID-19 and other changes over time.

Headey, D and H Alderman (2019), “The relative caloric prices of healthy and unhealthy foods differ systematically across income levels and continents”, The Journal of Nutrition 149(11): 2020-2033.

Yan Bai ([email protected]) is a doctoral candidate at the Friedman School of Nutrition, and Will Masters ([email protected]) is a professor at the Friedman School of Nutrition and the Department of Economics, Tufts University. This work was supported by UKAid and the Bill & Melinda Gates Foundation under OPP1182628 for research on Changing Access to Nutritious Diets in Africa and South Asia (CANDASA): https://sites.tufts.edu/candasa. More Blogs By William A.