The September 2019 global poverty update published today includes revised survey data which lead to minor changes in the most recent global poverty estimates. The next major update of global and regional poverty estimates is scheduled for March 2020. As part of the September update, we are also releasing the Stata command povcalnet and the R package povcalnetR, which allow users to estimate poverty at any poverty line for the world, regions or sets of countries, by querying the World Bank’s database of household surveys directly from within Stata/R. The commands also retrieve inequality statistics provided by the database. Finally, the PovcalNet website now provides metadata on the comparability of poverty estimates within countries over time, compiled by the Country Poverty Economists in the World Bank’s Poverty and Equity Global Practice.

This update includes revisions to 18 surveys from four countries. As a result of the revised data, the estimate of the global $1.90 headcount ratio for 2015 increases slightly from 9.94% to 9.98%, whereas the number of poor increases from 731.0 million to 734.5 million people, which is a small change relative to past updates. The table below compares the new global poverty estimates for the reference year 2015 with the previous vintage of the data, released in March 2019. The increase of the estimated poor population by 3.5 million people (or 0.04 percentage points) at the global level can be largely explained by changes to the household survey of Ethiopia. A detailed description of all changes made can be found in Atamanov et al. (2019).

Table 1. Poverty headcount and number of poor in 2015, differences between March and September 2019 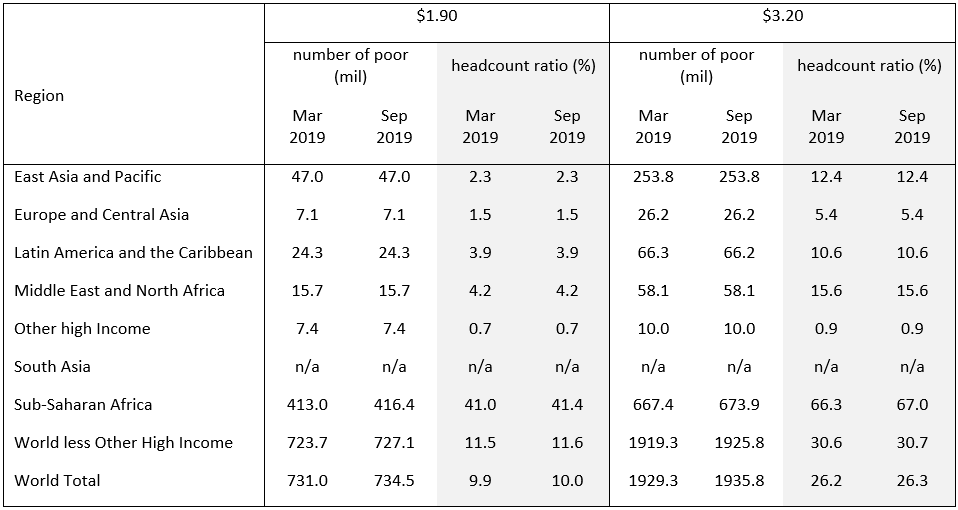 Using the Stata command povcalnet and the R package povcalnetR, the World Bank’s global poverty measures can now be accessed directly from within Stata/R, offering the same functionality as the PovcalNet website.

The povcalnet Stata command can be installed from SSC by typing:

The R package povcalnetR can be installed from github and will soon be available in CRAN.

We will illustrate the use of the commands with a series of blog posts over the next few months. A more detailed description with more examples can be found in the github pages (R and Stata), as well as Castaneda et al. (2019) for the Stata command. We encourage users to send us comments and suggestions, and to report any bugs in the github issues pages (R and Stata).

As countries frequently improve household surveys and measurement methodology, strict comparability of poverty estimates over time is often limited. Strictly comparable poverty estimates within a country require a consistent production process, including the sampling frame, questionnaires, the methodological construction of the welfare aggregates and poverty lines, a consistent deflation of prices in time and space, among many other considerations. Thus, the assessment of comparability is country-dependent and relies on the knowledge of the Country Poverty Economist and Regional Poverty Teams of the Poverty Global Practice, as well as close dialogue with national data producers with intimate knowledge of survey design and methodology. More details on the comparability metadata database can be found in Atamanov et al. (2019). The database can be downloaded here (csv, Stata).

The revised data can be accessed at PovcalNet and the Poverty and Equity Data Portal.