What the world’s poorest economies have in common

Eliminating extreme poverty by 2030 requires shifting attention to the places where poverty is most entrenched. What characterizes these places? According to a new report, Fragility and Conflict: On the Front Lines of the Fight against Poverty, the answer is that they are in fragile or conflict-affected situations (FCS) or are located in Sub-Saharan Africa.

In fact, the report reveals that we live in a highly demarcated planet. Based on 2019 “nowcasts” of poverty in all economies of the world, the 43 economies with the highest extreme poverty rate are either in FCS or in Sub-Saharan Africa—and of these 43, more than a third fall into both categories. In all of these economies, at least a fifth of the population lives in extreme poverty. 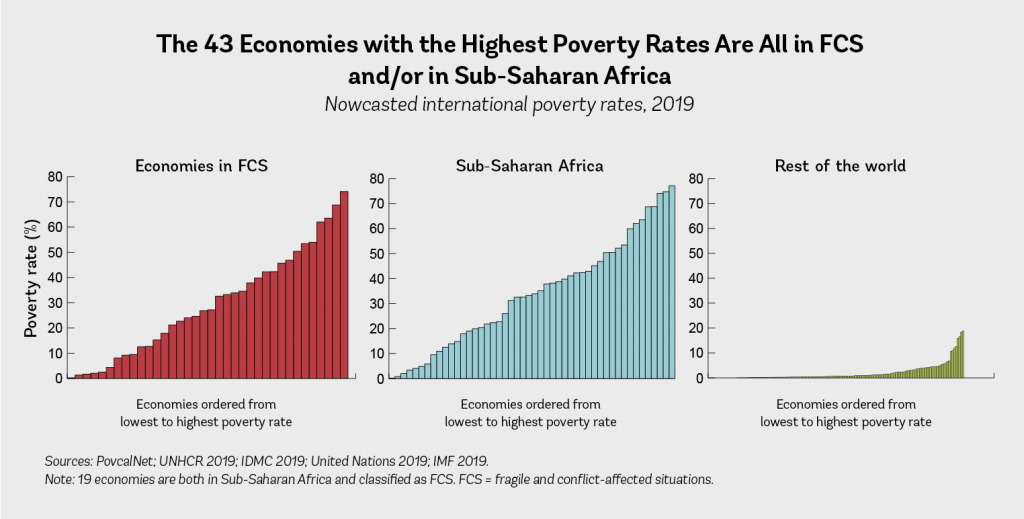 You wrote,
"At the turn of the millennium a score of economies neither in FCS nor in Sub-Saharan Africa had poverty rates above this threshold".
So what did the other countries do to get out of, or reduce their poverty rates?

Most of the nation with poverty in common have issues in health, literacy and basic healthy living conditions . They should work on infrastructure that provides employment for basic educated that will have multiplier effect to boast consumption and there by lockup more investment needs and employment. They have lots of tourism scope. Developed nations should support them for achieving best in these. Education and health support are the next preorities , again here the developing nations support is essential as they can easily identify the needs as they themselves would have experienced these requirements. Safety security and freedom is must for all people and ensure confidence in them . In this world Bank should conduct a conference to identify zones and initiatives.
Some of those living there with literacy should be invited in the conference as they know the conditions of underdeveloped nations. Easier zones to pickup are infrastructure and Agriculture to start with as the provide employment, income and primary needs. Free goods concept will not work in the long run sustainable development and be avoided. No supporting program of development should expect other hidden agenda as their returns. We expect all will have food shelter, literacy, employment, health and happiness atleast bt 2030

I think the UN security council should intervene and make enforcement in those countries. For the better life and security of citizens.