Unemployment and remittances during the global economic crisis 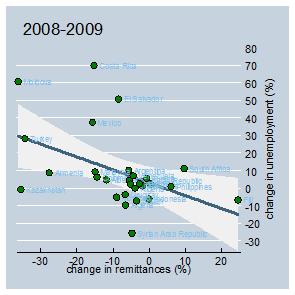 While not necessarily free of endogeneity problems, it is an interesting correlation as it highlights the potential risk for households – but also countries – that rely heavily on remittances. In a recent OECD Development Centre book entitled Tackling the Policy Challenges of Migration: Regulation, Integration, Development, which focuses on the link between emigration and the labour market in the home country, we provide a potential answer to this riddle.

Remittances can in fact lead to a drop in labour supplied by the household members receiving them for four main reasons:

At the aggregate level, we know that emigration may increase wages by decreasing the labour supply in sending countries. Remittances reinforce this mechanism and may thus contribute to lower unemployment. In reverse, a sudden drop in remittances, like in 2009, might force household members to re-enter the labour market, which cannot absorb this sudden influx of “new” workers.

While more work has to be done to confirm causality, the analysis illustrates the risks of a model relying on emigration as a tool for development. If remittances are not used in a sustainable way, the benefits they bring in good times may indeed quickly wash away in bad time. In “Tackling the Policy Challenges of Migration”, we discuss a few policy solutions around this problem.